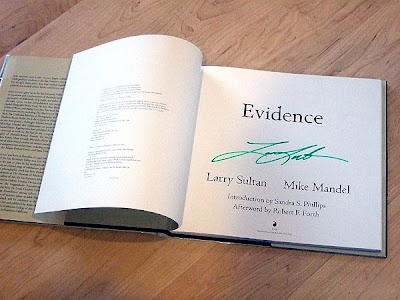 Evidence of Larry Sultan's visit to the University of Oregon
I've been to a lot of photo talks over the years and I almost always find them interesting in some way. Often they're by young photographers in the midst of some project, and I can gain insight into their process or thoughts.

Larry Sultan's talk last night was a cut above. This was a man at the full height of his powers, amazingly grounded, articulate, and just plain wise, somehow able to package thirty-five years of theory and practice neatly into an hour and a half. "Photographers are ventriloquists," he said. "We send out our photos into the world, and through them we speak." After years of hearing Sultan's voice through his work, it was wonderful last night to see and hear him in person. If you ever get the chance to catch him speak, do NOT pass it up.
Posted by Blake Andrews at 8:24 AM