Cary Conover: What Was He Thinking?

Cary Conover is a photographer based in New York City. More of his work can be found here. 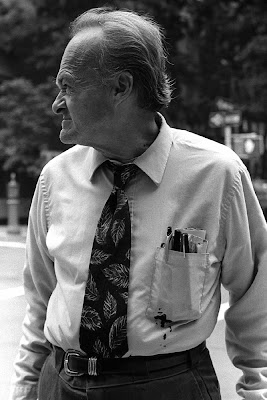 "I shot this picture on the corner of Spring and Elizabeth, which is New York City's Soho/Nolita neighborhood, in the fall of 2003. I remember I had just dropped off a CD of images at a gallery nearby and I was trying to figure out what to do next. Then I spotted this man, who looked like the kind of person I'd want to photograph. But as I got closer I noticed his outrageous ink-blotted shirt pocket. I wasn't sure if he knew about it, and I was worried that if I told him about it he might become embarrassed. So I said something like, 'Wow that's a great tie, you mind if I get a quick shot?' The first picture I took was from a little farther away and in it you can see he is holding an orange in one hand and a cigarette in the other. But he looks like he's saying something and just seems a little aware of me. So I moved in closer for another shot and that's when he turned his head to the side. On some level I think he must have known about the inked pocket and it's possible he might have even been a little bit proud of it. The pocket feels like a bit of a cliché from some slapstick comedy I would have seen growing up. It feels like a cartoon almost, like somebody slipping on a banana peel." 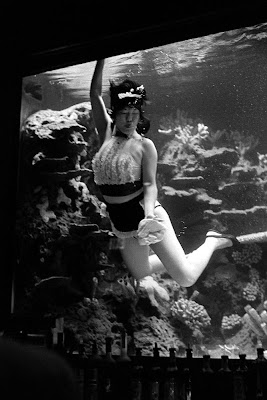 "This picture was taken in 2003, in a bar known as The Coral Room. I was there shooting a party for The Village Voice. I remember this was the day after power had been restored after the massive Blackout of 2003. Every half hour or so this woman (a French Mermaid?) would slip into the aquarium from above and do her little act. I'm sure she's been photographed a million times, as she certainly makes an easy subject. It's the kind of picture that can easily be paired with another picture. It's been in my portfolio paired with the same picture for five years, a Halloween shot of a woman who is wearing angel wings while also using crutches (an Angel With a Broken Wing?). This has got a little bit of that same double-take vibe going on, where your mind gets tripped up a little bit at first trying to comprehend the scene." 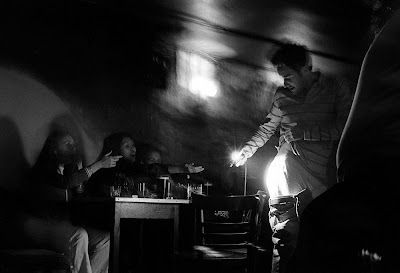 "This was taken around 2 AM on January 1, 2001. It's in a great little underground bar called Botanica and I was there drinking with my roommate. Earlier we had been trying to photograph the Times Square New Year's Eve ball dropping ceremony but it was way too crowded and cold and our mobility was severely restricted so we decided to head back downtown. My memory leading up to this exact moment is a little blurry, but I do have the sense that this guy was not friends with these three girls. I think what he did was a tipsy and flirtatious prank, using a camera that belonged to one of the girls. The three girls had been taking a lot of pictures of themselves and I had probably been doing some surreptitious bulb exposures trying to capture their flashes (part of my series called 'Other People's Pictures'). But when this guy came up and pulled down his pants I had to make sure I got it and so this one I definitely shot with the camera to my eye. What I like about the camera he's using is that its flash has a single burst of light. Nowadays most point-and-shoot cameras have a small pre-flash that doesn't translate as well in bulb exposures, resulting in a kind of double image/exposure." 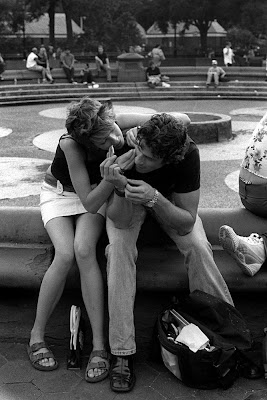 "This is Washington Square Park, 2004. Initially I was drawn to this couple's body language and how absorbed they seem to be with one another. It's hard to pass up photographing when people like this are so oblivious to their surroundings. I remember being able to get a few shots, as they were pretty focused on whatever they're doing. I can't quite figure out what's going on here, but it looks like she is either doing something with his ear or, as gross as it sounds, squeezing a pimple. He is holding a mirror and watching. For some reason couples are just a natural subject for me, and this couple has a real air of romance about them. But Washington Square Park itself is always a great destination for when I'm out on a long walk. This couple is seated on the edge of a fountain, which has since been torn out and moved as part of a massive restoration of the park that's taken the better part of a year to complete. So I like that it's an 'old' shot of Washington Square Park. But that's all very after-the-fact. You could spend hours just roaming around this park, lots of little nooks and crannies and pockets of activity, drummers and guitarists doing impromptu jam sessions, bocce ball players, dogs, NYU film students shooting movies, skateboarders, street jugglers, tourists, you name it. And of course the view up Fifth Avenue through the arch looking at the Empire State Building never gets old." 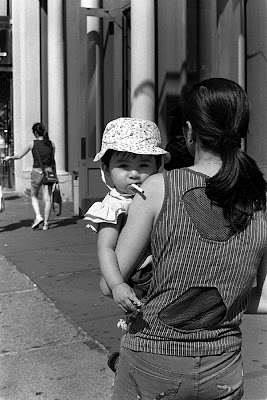 "I love the idea that photography is used to capture something you're pretty sure you're never going to see again (even if it's a picture of your three kids standing in front of the Grand Canyon). When people ask me what kind of photography I do, I usually say 'Oh you know, just the crazy, quirky kind of stuff that only happens in New York.' And I always mention that I have this picture of a baby with a cigarette in its mouth. Technically it's not the greatest image because the sunlight is pretty harsh and the background is kind of busy. But it is something I bet I'll never see again. I was walking south on Broadway and just out of the corner of my eye a man walking past me in the other direction was dangling a cigarette out in front of this baby, almost as if it was a treat or a pacifier. And then he stuck it in the baby's mouth! And that's when I did an immediate about-face and started firing away. There's a kind of surrealism going on: two truths/facts that your mind wouldn't normally associate -- a baby and a cigarette -- coming together to create one of those crazy scenarios." 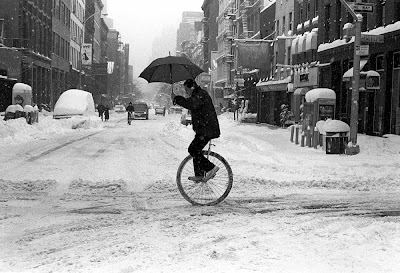 "This was taken during the Blizzard of 2006, when New York City got utterly buried in snow over the course of three days. It was the most snowfall (over two feet) accumulation since they started keeping records in 1869. I was supposed to be moving my then-girlfriend (now wife) Yvonne into my apartment on this day, a Sunday, but we didn't even bother picking up the U-Haul. Instead we just walked around and got pictures of people helping push out cars that were stuck in snowdrifts, people on cross-country skis, snowball fights, etc. At some point she and I had gone in different directions and I found myself on West Broadway at Spring Street when this umbrella-toting unicyclist came cruising by. I remember my reaction was a bit of a scramble because I was walking in the opposite direction that he was traveling and my camera was way underneath the crook of my right elbow, where I was trying to keep it dry. So our momentums were completely opposite. But I got my camera up and over and cranked the focus as fast as I could and this was the first frame out of three or four that I shot. In the others he's just too long gone. I've been trying to find out who this man is, as I've sold this print a few times and the picture has even run on the cover of a magazine. Again, I think of surrealism only because of the umbrella. A famous saying describes surrealism as the random juxtaposition of an umbrella and a sewing machine on an operating table. Well, this is my take on that saying." 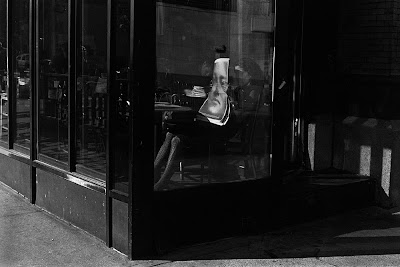 "This picture from Astor Place was taken in February of 2002. I am not normally a morning person, but this picture was shot before 10AM. I didn't even notice the face on the newspaper when I shot this image. Also, I remember that I was walking when I shot this, mid-stride as opposed to standing still. I just like how the lines all 'snap' into place, which is why I rarely shoot with anything wider than a 50mm lens. On a total side note, months after I shot this picture they started building a tall highrise apartment across the street that started to block out the morning sunlight. So if I wanted to go back and get people sitting in this little nook at this coffee shop with this exact same light coming into the picture it would be impossible. A lot of people told me they thought this looked like Bill Clinton's face on the newspaper. But I wanted to know for sure and so a few months later I went to a library and found the microfilm of The New York Times for the day this ad ran. It turns out it was actually a woman's face and it was for some anti-drug campaign. There was some text on her face that said something to the effect of, 'I went to a party this weekend. I did a few lines of cocaine. I didn't know I was supporting terrorism.' " 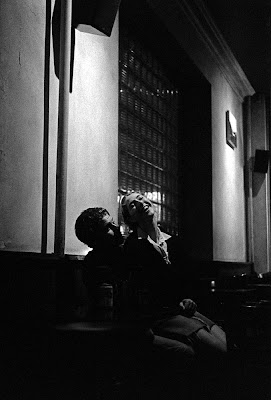 "Another picture of a couple, this is one of my favorites. This picture was taken at some incredibly insane hour, probably around 3 or so in the morning after Election Night, 2004. Most people had gone home for the night assuming it was going to be a Bush/Cheney win. But there were a few hangers-on who were just waiting for a definitive result from Ohio, which I think was still too close to call. What I think about most when I look at this picture is the tiredness and exhaustion that I felt. I think after the long 2004 campaign, all the attack ads, the RNC coming to NYC, the protests, etc., there was just this 'Oh well, we did our best' feeling. Regardless of whether this couple is happy about the election or if they're just loopy with exhaustion, this picture stands on its own and goes beyond the purpose of showing the outcome of one election. And that's because I think it has a classic, timeless look. It has that stripped-away-from-the-era-in-which-it-was-taken feel to it."
Posted by Blake Andrews at 4:09 PM