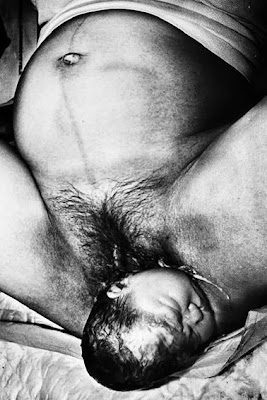 This photo was posted to Facebook recently by Magnum photographer Jacob Aue Sobol. It's a birthday photo (He was born 9/28/76). Unfortunately this crossed some unstated censorship barrier at Facebook. A few hours ago he was banned from posting future photos there. So I'm reposting here in the hope that this photo will recirculate, but mostly to say Fuck You to Facebook censors. I would like Facebook or anyone reading this to explain to me why this photo is obscene. You can find a million photos of guns, blood, and carnage on Facebook. But post a photo of the most natural process in the world and it's censored??? I can't explain it. I just know someone at Facebook has their head up their ass.

Update 10/8: Sobol reports on his Facebook page this morning that his ability to post has been reinstated. No word of explanation yet. Curious to see how this story develops.
Posted by Blake Andrews at 6:57 PM 8 comments: 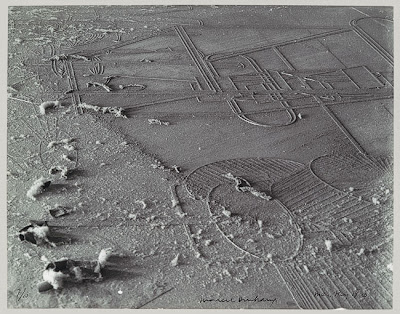 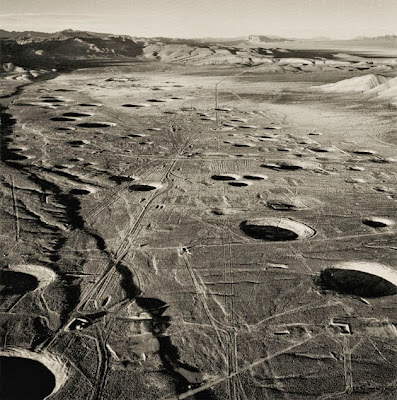 Posted by Blake Andrews at 10:14 AM No comments:

I tend to get obsessed with one photographer at a time, and lately I've been on a minor Boris Mikhailov kick. You know the routine where you dig through someone's books and web images all in a frenzy, trying to figure out where a person is coming from. I thought I had Mikhailov pegged. He's the Ween of the photo world with a style that's completely malleable, but always with one foot in the conceptual camp.

Then today I saw this photo of his in a recent book. 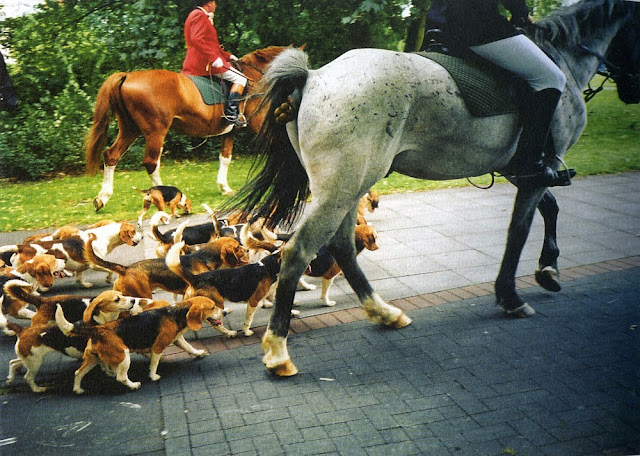 Holy darn if Mikhailov doesn't have some street in him! This photo has it all. Mystery, timing, form. What a perfect moment. So how the F- did it come from someone like Mikhailov? It looks nothing like his other photos and I would never in a million years attach his name to it. I know that's probably why he took it. He likes to defy expectation. But the thing is, you can't will yourself to be a street photographer. You can't just pull a photo like this out of your ass, which is what he appears to have done here. Or can you?

Too many questions. I suppose I should just enjoy the image and let my preconceptions get crapped on. Meanwhile, my infatuation festers.
Posted by Blake Andrews at 8:44 AM 3 comments: 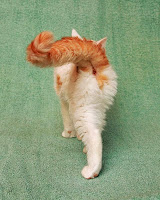 Arne Svenson is at it again. The New York based photographer created a stir last spring with his series The Neighbors. Shot through the plate glass exteriors of apartment buildings at unsuspecting subjects caught in private moments and in various stages of undress, the show at Julie Saul Gallery became immediately controversial, sparking heated conversations about voyeurism, privacy, and exploitation.

With his project Strays, Svenson has set his sights on an even more vulnerable subject: kittens. A recent Feature Shoot article explains the thinking behind the project. "Was it possible," Svenson wondered, "to ignore those big entrancing eyes and find the kitten's inner life, his back-story? Did kittens even have back-stories?"

Svenson realized that the central issue was "how to photograph kittens in a way that would connect to the underlying theme of my work, which is to cast light on the unseen, the ignored and overlooked." 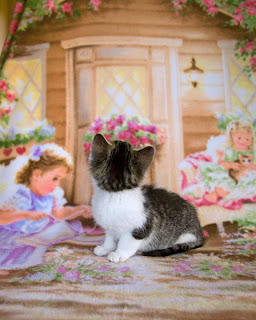 As with The Neighbors, the photographs required covert surveillance. If the kittens were aware of the photographer they would react. Something like a loose gear strap or a tumbling roll of gaffer's tape might tantalize them for hours. But Svenson was not looking for reactions. He wanted truth, dammit! This required removing himself entirely from the scene. From the seclusion of a neighboring building, unknown to the kittens, he watched them carefully and photographed choice moments using a 500 mm lens.

The resulting images, liberated from issues of cuddliness or cuteness, document a side of young cat life that viewers have rarely had access to before. From perky-eared inquisitiveness to the lofty arrogance so characteristic of felines, Svenson's photographs unabashedly show it all. They show back-story, tail, anus, hind legs and all. Never before has the inner life of cats been laid so bare, so achingly unguarded.

Like The Neighbors, Strays raises a host of questions regarding privacy, complicity, and surveillance. Can a kitten consent to be photographed? If so, did the kittens in this case grant permission? Would they even care, or are they generally more concerned with bits of string and chasing birds? Is the claim to privacy a basic feline right? What about when they venture into a neighboring cat's territory? And why do cats sleep all day? What's up with that?

Svenson doesn't pretend to have the answers. He leaves the photographs to speak for themselves. The viewer has room to bring his or her own experience to the work. This reluctance to wrap his work in theories hasn't been a hindrance to sales. Collectors and cat-lovers alike have flocked to the work like kittens to cat-nip, selling out the complete edition. (Photos by Arne Svenson)

A note from the cheap seats

What's that? Summer's over? The fall rains have begun? Drat! Oh well, I guess it's time to hunker down indoors and resume blogging again. Who knows if it will once again become a regular habit. Honestly that regularity was a bit of a drag last time around. The expectation of producing something every day or so. Good grief. I know journalists and beat writers deal with that pressure on a regular basis. But I'm not getting paid. This is supposed to be fun. And it will be, and long as no one expects it to B. So don't get your hopes up. I'm certainly not.

During B's absence all sorts of changes have happened in the blogosphere. Can I still call it a blogosphere? Many photo blogs have withered away completely, while some have picked up steam and been transformed into modern-looking starships. Concientious, Lensculture, Lenscratch, and DLK (Collector's Daily) now resemble online magazines more than blogs. They have buttons, menu, and newsletters, and appear designed by real-life graphic designers, not just some schmo on Blogger. Nice work, guys. But it brings into question the nature of a blog. Should it be a daily chronicle? If so, Tumblr seems better suited. Or should it be fleshed out as full-fledged resource base?

In some sense the gauntlet has been thrown. One can either step up to the big leagues and create a professional web presence, assuming all of the influence and accolades that come with that step. Or one can get out of the way.

Yes, Lee Iacocca's immortal words have finally come true in the blogosphere. All the trappings of power --the posse of reliable retweeters, limos waiting curbside, access to hot young interns-- are now accessible to anyone who is willing to put in the time and energy to upgrade. But for those unwilling or unable to keep up, the default option is to fade into the blogospheric background as a second-tier town crier. Maybe someone will read you, maybe they won't. I think it was this ambiguity which drove this blog offline last June. Why put in the time when no one gave a shit? A thought which I'm sure every blogger has contemplated at one point or another.

But the thing of it is, I've come to realize it's not about the glory. It's not about the limos or comped cocktails, though I wouldn't turn down either. Hint hint. It's about standing on that soapbox. If you close your eyes and imagine you're Thomas Paine spouting truth-to-the-world-dammit!, it can be just like the good old days of the internet when the playing field was level and everyone had an equal voice. Why, in the wee morning hours after you've been standing on that soapbox for several days, even those voices inside your head might be treated as equal. You know, the ones which sound louder when you're wearing the aluminum rabbit ears? Those ones. And with your help they might be spread far and wide. Someone could read you in Timbuktu or Beijing, or a small town in Kansas, a forgotten corner just clinging to a ray of blog-hope to nourish on some small photographic morsel. Would you deny that person?

So I've been wrestling with the decision. Am I gonna step up to the big leagues? Or am I gonna continue heckling from the cheap seats? In June I wasn't ready to answer that question. But I've matured. I'm older now, and slightly tanner. And I own a few new T-shirts. What I'm gonna do is split the difference. I'm gonna heckle from a newly designed blog.

I've given B a complete makeover but --Grace Slick be damned-- it's less like a starship than an airplane. My promotional budget is zero. No tweets, links, likes, or publicity. Rather than adding features I've removed them, and rather than hiring a graphic designer, the layout is proudly by just some schmo on Blogger, i.e. me. The content will be the same, but of course more mature. Less fucking potty talk. And probably less regular postings. More like a...a magazine?

I know this will be confusing. I'm confused too. So I've prepared a simple blog usage manual explaining some of the changes and new terms. 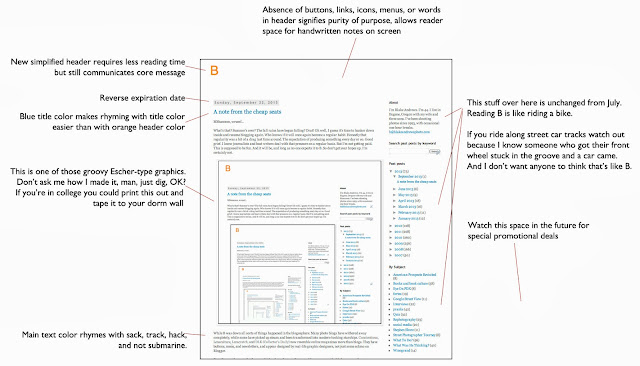 Maybe someone will read it. Maybe some won't. But I've come to terms finally with that equation, and I'm ok with it. It's not you, baby. It's me. It always has been.
Posted by Blake Andrews at 1:07 PM 13 comments: