Alas, Seattle's CHAZ is dead. It was always a precarious endeavor, but the nail in the coffin, literally, was a string of recent shootings, two of them fatal. That proved too much for authorities to take, even in anything-goes Seattle. So on Wednesday they shut it down.

For the few weeks it existed, CHAZ was a source of intrigue for me. Here it was, a real life Temporary Autonomous Zone, exactly as Hakim Bey had predicted all those years ago in those weird books I plowed through at 1 am on the dorm roof. And this particular T.A.Z. wasn't all that far away, just a few hours north on I-5. But of course T.A.Z.s are by definition temporary, so my clock was ticking to get up there.

After weeks of hemming and hawing, I finally managed to squeeze in a visit last Sunday, which was just under the wire as it turned out. A Seattle airport run provided the perfect opportunity. After dropping Zane off at Sea-Tac I hustled over to Capitol Hill, an old Bohemian/Hipster neighborhood propped on the eastern shoulder of downtown. I parked near Madison and Boren, and began walking with my cameras.

But first a bit of background on Seattle. The entire city is growing like a cancer. I mean, I know it's like that everywhere. But Seattle is next level. Developers are in a mad rush to tear down the old shiny things and put up new shiny things. And Capitol Hill is no exception. The pace of development is maybe a little bit less frantic there than downtown, but still. It's enough to freak everyone out. Seattle's hopped up like an ant hill that just got peed on, digging new tunnels everywhere, and I suspect the general sense of disruption played a role in the creation of CHAZ.

By the time of my visit CHAZ (Capitol Hill Autonomous Zone) was no longer CHAZ. It had been renamed CHOP (Capitol Hill Organized Protest). Regardless of label it amounted to the same thing. A six block section of Seattle had been taken over by protestors during the BLM demonstrations in early June. The initial impetus was created by police evacuating their Capitol Hill satellite office. Protestors filled the vacuum immediately, then gradually expanded their territory to include a nearby park and surrounding neighborhood.

Large concrete barricades in the streets marked the approximate boundaries of the autonomous zone. Their girth was impressive. Someone must've had some serious power equipment to put those things into place. Looking around at the forlorn squalor of the nearby tent villages, such motivation was hard to imagine. But the barriers were physical proof. Someone in the recent past had been energized. 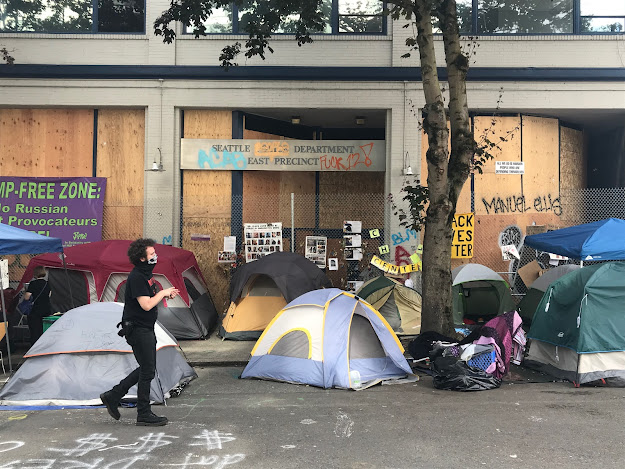 That was weeks ago. But what did CHOP look like now? Take a tagged up subway car from 1970s New York, add an extra layer of graffiti for good measure, mix in one part rainbow gathering, one part BLM, one part Occupy, and a steady parade of gawking tourists (like yours truly) and you'd be in the ballpark.

As in many U.S. cities (Eugene included), the words "BLACK LIVES MATTER" was painted in huge letters across one street (Pine, I think?). Seattle's version was prettier than most, painted in patterned colors rather than straight yellow. 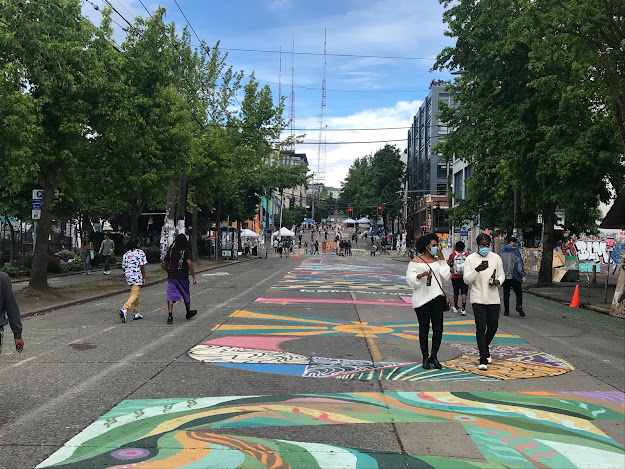 Taking these words as a cue, CHOP residents had gone on to paint things on other nearby surfaces. Pretty much all of them actually, by my unscientific count. Virtually every bare wall and street within a quarter mile radius was plastered with spray paint, murals, wheatpaste signs, and plywood placards. The opinions expressed ranged from general unease to outright ACAB fried bacon anti-police rebellion. Many of the businesses along Pike and Pine were boarded up. Tents were scattered along the sidewalk, clustered in small encampments. Someone had set up a kiosk near the mural selling BLACK LIVES MATTER T-shirts. There was a bubble machine. The vibe was friendly and peaceful. 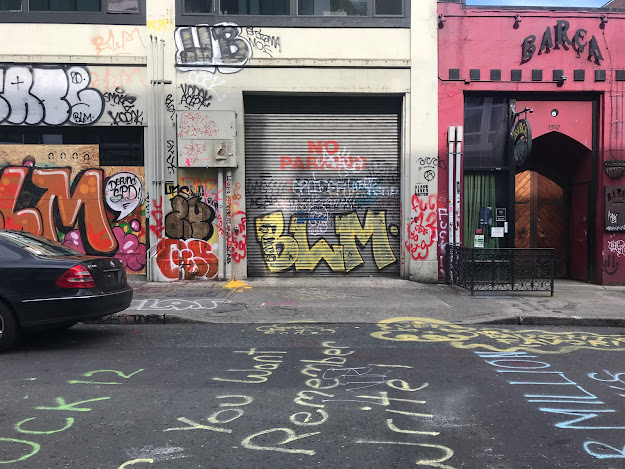 CHOP was roughly centered around a large park covering a few blocks, half sports fields and half natural area. A large section of this area was taken up with various encampments. This is definitely the part I would've staked out had I been camping. I mean, who wants to sleep on pavement when trees and grass are nearby? But I don't know how it worked. Maybe there was some strange territorial arrangement about who got to stay where? First come first served, as in the pioneer days? (But without the imperialist pioneer statues.) 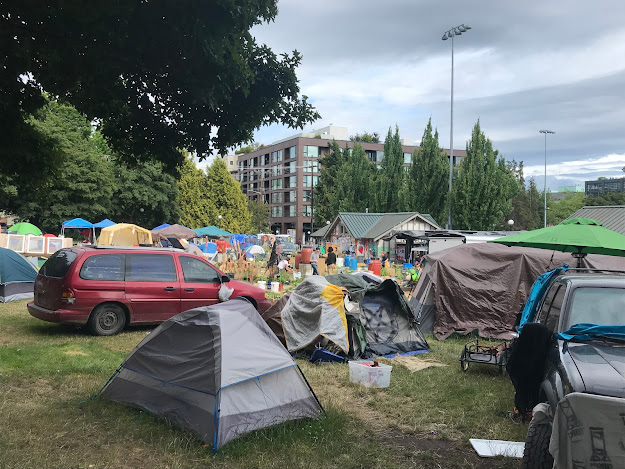 I made a rough circuit of the entire area, shooting occasional photos but mostly keeping my camera at bay. CHOP seemed almost a private space, like someone's back yard, so shooting photos felt sometimes invasive. Plus there were signs everywhere like this one: 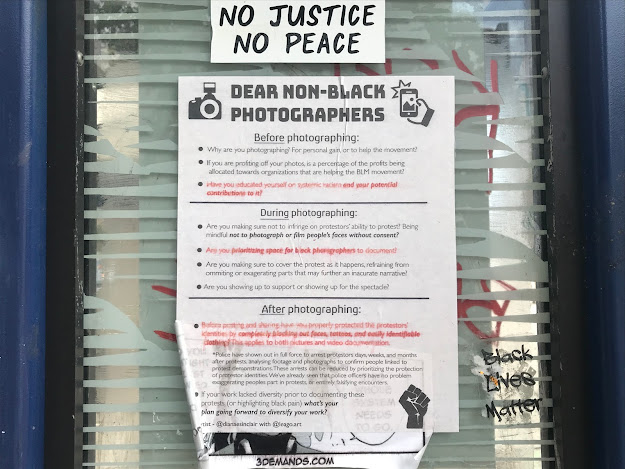 Why are you photographing? Ack, I never know how to answer that question. But as a Non-Black photographer, I felt obligated to think about it. Was I photographing for personal gain or to help the movement? Hmm. I wasn't quite sure. Why was I photographing? Because it's there? For Art? Compulsion? Ack!

Another sign reminded me that, as a white person THIS ISN'T A FUCKING SUMMER CAMP. Good wake up call. 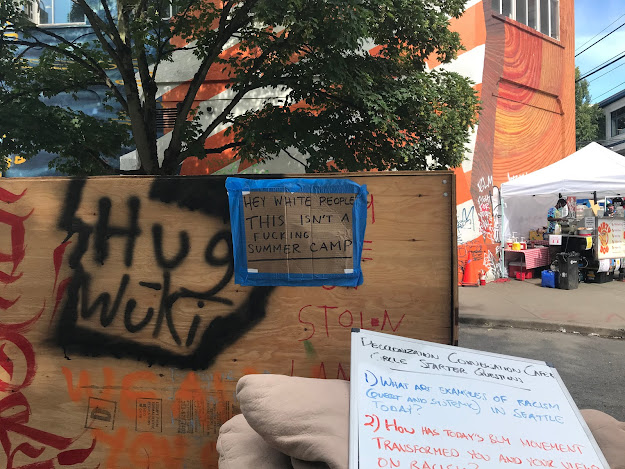 The why-are-you-photographing-summer-camp issue came up again when I saw this BLACK LIVES MATTER sign in a restaurant window. 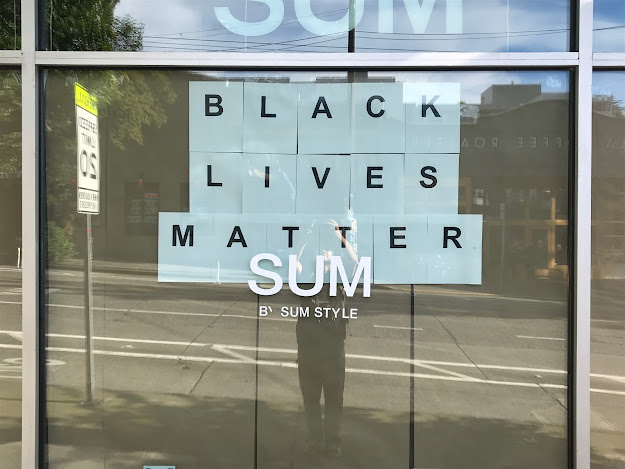 Combining it with SUM formed the type of visual pun that I really enjoy photographing. But hmmm. Should I take a photo that poked fun at such a grave matter? By now you know the answer. Hey, settle down. It's just a photo. I stand fully with the BLM cause. I mean, duh. But I'm still a humorist, and if I see a sign pairing like this I cannot resist. Privileged white dude, I know. Moving on...

Up on the back field, taggers had spray painted the reservoir cap with various messages. One said COPS NEED LSD. A pretty blunt statement, but one which I could get behind if the LSD were somehow applied methodically. You wouldn't just dose any cop willy nilly without asking. That's a recipe for crazy armed SWAT teams. But if some segment of the openminded ones could be teased out, then shown a more expansive thought process, well, who knows where it might lead? It's very hard to see anyone applying a knee to someone's neck post LSD-awareness. I mean, after you realize you're one with everything, you'd basically be choking yourself, right? So there's that.

But cops might be just a starting point. Once they were onboard, perhaps we could introduce LSD to congress or the court system? Or the CEO class? Or what about developers? Could we create a skyline inspired by Antoni Gaudi instead of Mies Van Der Boring? Just thinking out loud here. Or is that the voices in my head which are yelling out loud? 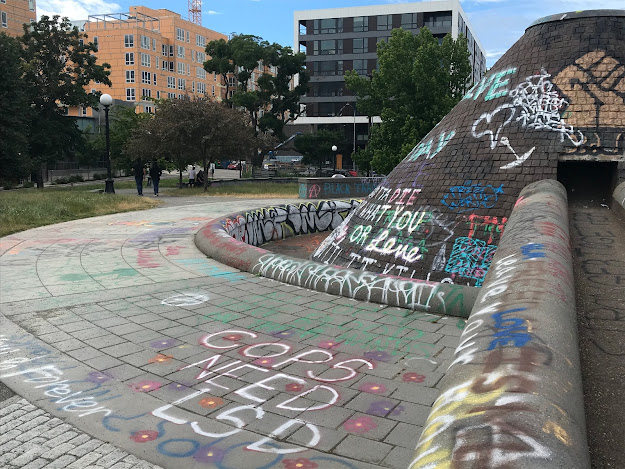 I guess the main idea behind CHOP is self-governance. It's Don't Tread On Me, an outlook which is very American, and connects the back ends of libertarianism and peace loving flower power. Less regulation, less police, less societal oppression, more autonomy. The freedom to do what you want when you want. You might encounter the same prerogatives in backwoods Idaho or inner city Baltimore. And I think in each person's heart of hearts there's a part which desires this basic degree of liberty. When you think about it this way, is our nation really so divided, after all?

I could definitely sense a libertarian streak in the pickup basketball game which soon got going in one corner of the park. It was street ball with flashy moves, trash talk, not much passing, 3s jacked up every minute, and hard knocks D. This was every man for himself, and the players seemed to relish their independence. Bodies and sweat were flying. Nary a mask in sight. I thought of Jefferson: That government is best which governs least, because its people discipline themselves. But this game hewed closer to another code: no blood no foul.

I watched for a little while, making mental comparisons to my middle aged white, gravity-laden pickup game at the Eugene Y (now suspended due to coronavirus). The Y game was definitely more team-oriented and structured. But the crew I was watching would steamroll any picayune Y team. So who's to say which strategy was best?

Near the basketball court was best sign I saw at CHOP: 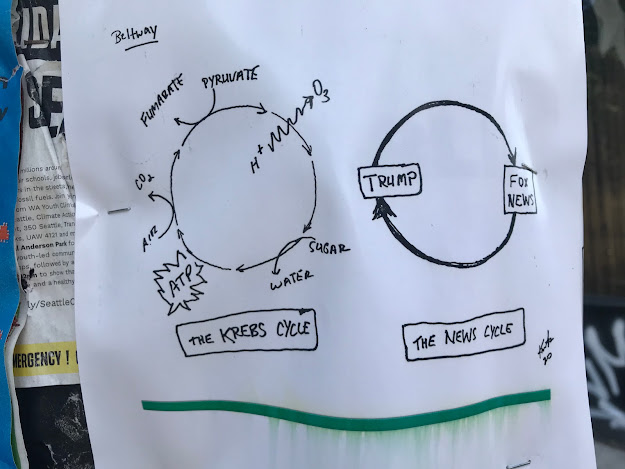 On that note I eventually circled back to the main thoroughfare on Pine Street (BLM mural), where a sign declared that protesters would meet at 5 pm in the nearby baseball field every day for speeches and a march. It was 5 pm and I didn't see much activity. Were those people laying on the grass in centerfield waiting for a speech? Or just lounging in the sun? Hmmm, hard to say. I walked some more, came back in 15 minutes, and the scene was the same. No sign of any gathering, and looking out at the field of sunbathers and campsites it was hard to imagine anyone stirring into action. I gave the scene one more round, coming back around 5:30. Still nothing, so I ditched CHOP to walk Broadway, Pike, and downtown Seattle. The afternoon light was perfect, but very few pedestrians were out.

Walking toward the bay from Capitol Hill I was reminded of another trip to Seattle back in 1999, when I'd parked in almost the same spot and walked downtown to photograph the WTO protests. I'd spent that day wandering the core in a state of disbelief as the protests grew larger and larger, and then finally tipped over into outright anarchy as dusk arrived. That evening Seattle become a citywide CHOP beyond the reach of any authority. 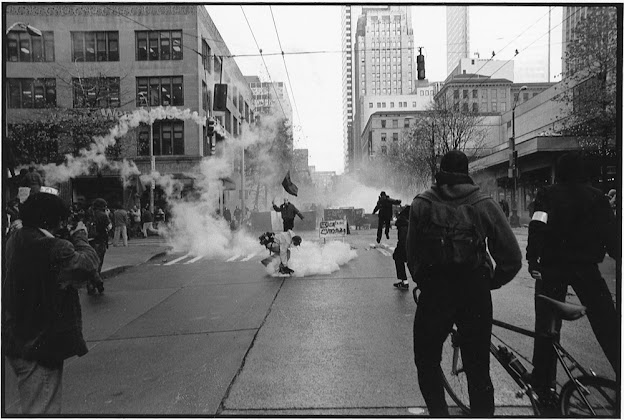 Before that point I thought I might enjoy anarchism as a societal structure. But walking Seattle's streets of chaos, tear gas, burning dumpsters, and leaders in full retreat convinced me that I was a wimp when it came to governance. And that was more than twenty years ago. I've grown even more mild lately in middle age. Just give me a simple government that works efficiently to keep order and collectivize infrastructure and I'm good, thanks. Maybe national health care too, while you're at it.

Three days after my visit CHOP was gone, erased in a pre-dawn raid. Where everyone went I don't know. I think the graffiti, photos, and memories will be harder to wash away.