In Powell's last week I stumbled on two photo books which couldn't be be less alike, yet each worked in its own way. It was another reminder that there is no one true method.

Boystown: La Zona De Tolerencia is a collection of photos taken in bars along the U.S./Mexico border. These were shots taken by house photographers in the bars with full consent of the subjects to remind them the next morning of the fun they had obliterating their memories the previous night. Although the names of the photographers have been lost in the shuffle, the physical photos remained property of the bars. Over the course of many years they were meticulously scavenged by collector Bill Witliff and published as "Boystown" by Aperture in 2000.

Boystown is the raunchiest photo book I've seen in a while. Drunken leering slobs, illicit gropings and groupings, barflies passed out on the floor, etc. It's not a book for the prudish. But if you can stomach the depravity, these are among the purest moments I've seen captured on film. In many photos the drunken louts are completely blissed out while their female companions, most of whom appear sober, stare with bored or resigned looks. The simple juxtaposition of happy and sad caught up in the same flash is quite visceral. I haven't seen expressions so pure and unmediated since my kids were babies. The group shots and a few frontal nudes are just as honest, the sort of wonderfully unconsidered snapshots that folks take at parties all the time but refined by Witliff to the best, choicest moments. If any of these photos were by established photographers they'd be widely distributed but instead they're completely unknown and unappreciated, and —this is the best news— so is the book. I found a used copy at Goodwill in Seattle (via ABE) for around $10. 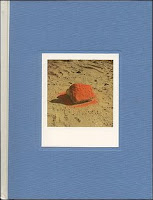 If Boystown projects the energy of Never Mind the Bollocks..., Mike Slack's Scorpio (The Ice Plant, 2006) is more akin to Music for Airports. Like Slack's previous book OK OK OK, Scorpio is a beguiling series of Polaroids which upon first glance have nothing to do with each other. The scenes jump around interior and exterior, far away and close, in and out of focus.Like Eno they slowly accumulate and simmer in the Reptilian brain, forcing you to ask yourself what is going on here? Why do these photos work?

I think the answer lies in the sequencing, which seems to have settled on the exact midpoint between order and chaos. The photos don't at all relate to one another yet...they do. Perhaps theirs is the rhythm of the natural world with all its starts, stops, catalysts and resting points. For example every time through the book I am stopped cold by the same image of unfocused city lights. Seen on its own it might not stand out, but primed by the previous photos my brain thinks it's seen a ghost. What was that? It doesn't seem quite real (in contrast, Boystown is hyperreal).

What ties Scorpio together is exactly that thing which Boystown is missing, the voice of one author. To enjoy Scorpio one needs to take a leap of faith that Slack will show you the goods. His voice is not only the glue, it's the gesso too.

I suppose Witliff plays that role for Boystown since he bore the duties of collecting and editing. But Boystown depends less on a universal voice than on the strength of its individual images, and in fact the very lack of identifiable author is part of its charm. Book publishers have produced a good run of these anonymous snapshots collections lately, and I think their continued appeal rests on the sense of mystery behind the photos. Who took these? Who are these people? And taking a step back, what, if anything, separates some dusty old scrapbook item from the work on a museum wall?

These are good questions to ask about any photo. Since there is no one true method, the answers will be as countless and varied as words overheard in an airport.

4/13/9 Postscript: As I expected, this post spurred a massive jump in sales for both books. Boystown spiked from #489,359 on the Amazon rankings all the way up to #489,353 before slipping back a bit. Scorpio did even better, leapfrogging 10 spaces over several out-of-print romance novels to land at #789,225. I just wanted to take a moment to give myself a congratulatory slap on the back for wielding such awesome influence.
Posted by Blake Andrews at 6:20 PM