Adjudication is in the air. On the same morning I received my first jury summons in over ten years I got a heads up from Pete Brook about his recent post comparing the photos of Abu Ghraib to Roger Ballen's Shadow Chamber. Looking at the two sets of images I have to admit there is some strange similarity, although as Brook points out no firm causal relationship. But maybe that's the magic. I love when authors show me how seemingly unrelated things connect, especially in photography. Lawrence Weschler has compiled a very entertaining book of such visual occurrences. 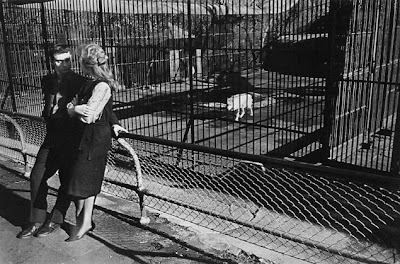 A caged beast in the shadow chamber courtesy of Winogrand
The funny thing is that when I saw Roger Ballen lecture last summer, he gave off a sort of imprisoned energy. He paced the floor like a caged wildcat. His speech was sharp yet meandering, a bit like a prisoner of conscience shouting through bars. You know in your heart of hearts I'm right mixed with Can anyone hear me? I think some of that feeling is in his photos.

Brook's Prisonphotography blog is good reading from an under-represented point of view, and potentially practical too. Considering the trend in anti-photography legislation there's a chance any shooter can land in the pen. Just pray you don't wind up in the Shadow Chamber.
Posted by Blake Andrews at 12:21 PM