Welcome to my world

If you set out to design the perfect room for listening to music, what would it look like? It would have a minimum of visual distractions. The lighting would be dim. The space would be roomy enough to boogie, with not much furniture. Perhaps there would be some minor non-musical task that could be completed while standing in dim lighting, something rhythmic. The music itself would be attached to the body, an iPod with plush headphones that followed you everywhere. 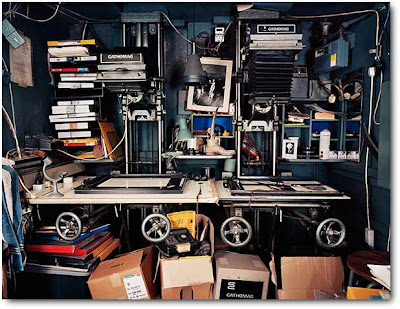 Roy Snell's darkroom photographed by Richard Nicholson
Funky, but perhaps unsuitable for funk
The room I've just described should be familiar to most readers. Most people think of a darkroom as a place to make prints, but its role goes beyond that. A darkroom is a perfect listening environment.

Working on a computer is similar but for me it falls short. In front of a monitor, you're often multitasking, juggling a range of visual information. You can have iTunes on in the background (I have it on now) but that's just the point. It's in the background. Plus you're sitting on your ass. It isn't the same.

In the darkroom, I have a four or five hour block every week where I can really focus on music. It's a weekly appointment I've come to love and depend on. I usually spend the first few hours listening to recently discovered CDs straight through. About mid-way through, when concentration is perhaps a bit less sharp , I spark things up by putting the iPod on shuffle. I've got about 13,000 songs loaded and, just like a good radio station, there's no telling which will be next. 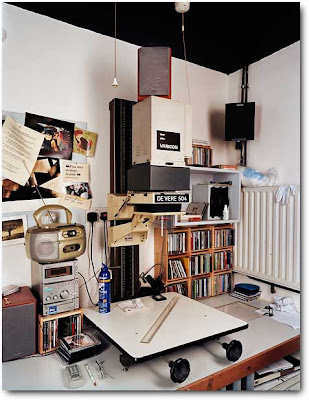 Adrian Ensor's darkroom photographed by Richard Nicholson
Music setup: decidedly low-fi yet crankable
Some music seems particularly well suited for the darkroom. Lately I've been listening to a lot of old ska and reggae. I love to dodge and burn to the back-rhythm. I recently came across an album of Tanzania songs from the 1960s made a few decades into that country's infatuation with Cuban music. It goes well in the dark. Early Black Sabbath can be good in the dark, or else very bad. It depends. Although the darkroom is one of the few places I can really focus on the lyrics to some of the longer Dylan songs, a lot of folk music suffers in the dark and I find myself fast forwarding. Generally if I'm standing up I need rhythm.

I used to hop up and down and use empty trays as a drumset but that was before I realized they could hear me in the office downstairs. They let me know and that was the end of it. And of course when others are sharing the darkroom I'm generally less physical. I may be in my own world but I don't need to force everyone in too.

As Richard Nicholson has so wonderfully documented in the photos above, the era of the darkroom is coming to an end. When its extinction is complete, my own private listening world will vanish as well.

I think darkroom vs lightroom choice is both generational and a telltale personality trait to some extent. Being a baby boomer raised on illustrated magazines I feel a connection with the medium's and my personal past immersed in the red glow, smells, and isolation of the darkroom( yes ,jazz radio or CDs help). I doubt many digital printers set up hardware in small dark rooms or closets.

I suspect if schools stop teaching darkroom skills there will be few raised in the digital era to even consider the option. I for one, like the few platinum printers about, will do what suits me... though access to materials will be more likely to limit this than mortal combat suggested in the previous post.