Edward Hopper & Company at San Francisco's Fraenkel Gallery looks like a show for the ages. Too bad I won't be able to see it in person. Although Tony Ray-Jones is not part of that show I think he summoned the ghost of Hopper when he made this image: 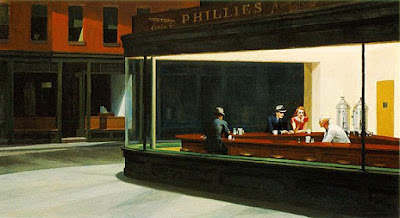 Nighthawks, 1942, Edward Hopper
It's a shame there aren't more books on Tony Ray-Jones, just two early monographs and Russell Roberts' 2004 compilation. Those thirsty for more can sort through this site, which shows over 300 images from Ray-Jones archives. What a true talent he was.
Posted by Blake Andrews at 8:56 AM

Thanks for the wonderful link... I agree that such limited viewing of his images is available in published books... I thought it was because of his premature death that less was available. It was a pleasure to browse the site and see how prolific he was in his short imagemaking career. His war and color shots only hint at where he could have been given more time.

wow. this is great stuff. great off peak moment photos. amazing when a photographer seems to have a sense of which mundane moments in his own time will make for great viewing 40 years later. - plec