Another artist sells out

If George Tice gave a speech in the woods and no one heard it, would it make a sound?

Tice gave a free lecture yesterday at the Jordan Schnitzer Museum in Eugene (in conjunction with his current Paterson show there) followed by another today in Portland. For the Willamette Valley this is a rare treat. It's not like New York where you can take your pick of famous photographers speaking on any given night. Here we get one lecture per month at Blue Sky with bonus speakers like Tice on occasion. 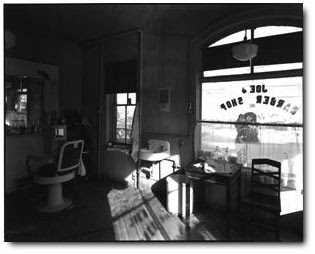 I thought everyone would be going yet when I brought up the topic with a circle of photographer friends in Portland, the reaction was complete disinterest.

I don't understand this reaction. Tice has been shooting over 40 years. He's received every accolade possible, and he is generally acknowledged to be in the upper tier of post-war photographers. To my knowledge he has never spoken in Oregon. So it seems strange for any active photographers here not to be at least a little curious.

One explanation is that people don't respond to his work. Which is fine. It's large format black and white, and not everyone is into that. If your brain is used to wearing a T-shirt and sandals it's hard to squeeze it into a tux. But give the guy props. Even if his photographs aren't your cup of tea I can guarantee you'll get something from his talk. He's been there and he's done that, and now he's ready to lay it on us.

The other possible explanation, which bothers me more, is that folks don't know his work and aren't curious to learn about it. Incuriosity drives me crazy! Incuriosity is the enemy of any creative act. Incuriosity is what keeps you from wandering around that next corner and once you stop doing that you might as well put a fork in you. You're done.

I was busy writing these thoughts down yesterday morning before the lecture. I figured I'd listen to him talk and wrap up the post with a few Tice anecdotes. But a curious thing happened on the way there. I never got in the door.

George Tice's lecture at the Jordan Schnitzer was sold out.
Posted by Blake Andrews at 8:45 AM

George Tice is at Portland Art Museum today(3/1) at 4pm!... Tickets only $5 , free to museum members and students and auditorium larger and unlikely to sell out.

He certainly seems to be a photographer's photographer. Though many iconic photos to his name, shown at MOMA, etc, etc... I too am amazed at lack of name recognition here in the west.


Can't wait to see him. I grew up in Linden, NJ and ate weekly just by the counter at the St. George diner, sat with soft cone on the sidewalk on a hot summer day at Dari DeLite, and stopped by for button burgers at his White Castle before Mcdonalds existed in the NE. He has been an inspiration to me in the camera'a ability to document the everyday and make it beautiful.

PS-If no tickets left for Portland talk I have a extra .

I'd have gone for sure. His most famous gasoline station image was made in Cherry Hill NJ which is about 15 minutes from a house I lived in once.

The word verification is "porke." Do I look fat in this comment?

I had the same reaction to Mr. Tice when I was 20. In fact, I think I actually asked him something along the lines of how he would defend his work if someone accused it of being boring.

Fortunately, I was not killed on the spot (though I can't say it would have been completely out of line looking back). And needless to say, there's a lot to learn from the guy in terms of tradition, patience, technique, discipline, etc even if his stuff aint your particular cup o' tea...