In today's economic climate, Dorothea Lange makes for instructive reading. Thumbing through one of her old monographs today I stumbled on this image: 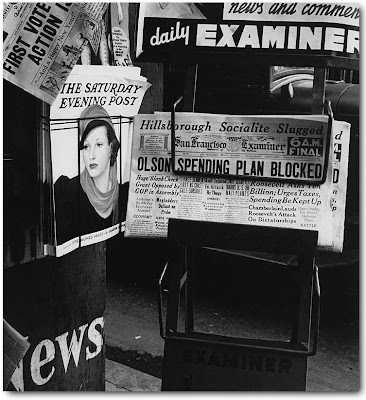 San Francisco, 1939, by Dorothea Lange
The newspaper is dated January 6, 1939 (click on the image for a larger, more legible version), nine years into the last great depression. Look at the headlines.

Juxtaposed with the headlines is The Saturday Evening Post showing a young blemish-free model which would be interchangeable today with the cover of People or Vanity Fair, while the pagetop teaser Hillsborough Socialite Slugged mirrors the Hollywood blather commonly shown above the fold today.

The more things change, the more they stay the same.

We can only speculate what attracted Lange to this scene. The problem for any photographer is that newspapers are specific. They have dates and facts and headlines designed to be clear and unambiguous, and it can be difficult to create a universal image from such literal material. All of which may explain why this photograph is the only one like it in the book. It's one of the few which doesn't show people, one of the few urban shots, and the one of only two in which text plays a key role.
In making this photo Lange defied many of her own stylistic conventions.

Despite that, she succeeded in creating an image that many decades later seems as fresh as yesterday. What was going through Lange's mind? I think she was going on raw instinct, the gut sense that her epoch wasn't unique and that the cycle would repeat itself eventually. And seventy years later, here we are.
Posted by Blake Andrews at 7:55 AM

Amazing how some thing never change!