Managing a stable of cameras is a bit like coaching a small sports team. One or two of your cameras are the starters. The rest are subs. You can tell them apart because the starters hang from your neck while the subs sit patiently in your pack and rarely come out. Maybe you'll use a sub as an injury replacement when your main camera is in the shop, or maybe in the late innings you'll call one up as a pinch hitter. But I've found that 95% of the shots I take are with the camera around my neck, i.e. the starter.

Sometimes a sub becomes a fulltime starter. This is what happened to me for about 2 months this past Winter. For no reason that I can determine I found myself shooting my Diana all the time. I'd had the camera about a year and it had usually ridden the pine. But during December and January something changed. All of the sudden my Diana was the starter and the rest were subs. I ran 2 or 3 rolls per day through the thing. I couldn't get enough of it. I became infatuated with Rexroth's Iowa and Lightleaks Magazine and anything else I could find that showed Diana work. 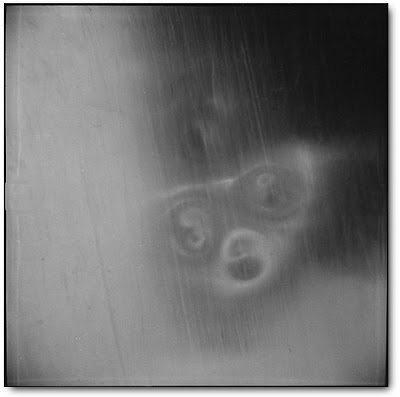 Amazon playground, Eugene, December 2008
Was it the winter light? Something in my diet? Was I done with straight photography? I'm still not sure what happened exactly. I just know that everything I looked at seemed like a potential Diana shot.

Then about 3 weeks ago, without warning, my Diana became a sub again. It happened so smoothly that at first it barely registered. I didn't feel any differently. But when a photo came up instead of reaching for the Diana I was reaching for the M6 again just like old times. As quickly as it had begun, the affair was over. That's where I am now.

The whole episode was as strong and brief as a teenage summer romance. At times a thing can seem like the most essential element in your life and a month later you wonder what the big deal was, and both feelings seem beyond your control.

In order to figure out just what happened I need find a nice park bench where I can spend a few hours looking over my Diana shots.
Posted by Blake Andrews at 3:36 PM