Street Tournament Polling wrapped up this morning and the winner is Garry Winogrand. Was there ever any doubt? Well, yes actually. Winogrand probably has as many enemies as fans, and he is as misunderstood and controversial as any street shooter. I'm sure some will be mystified that he won. To those people I would point out that nothing is as mysterious as a fact clearly described: Winogrand defeats Frank, 91-73.

Love him or hate him, Winogrand blazed an energetic trail in his own original style which is still making waves a quarter century after his death. I think he's a very deserving winner. 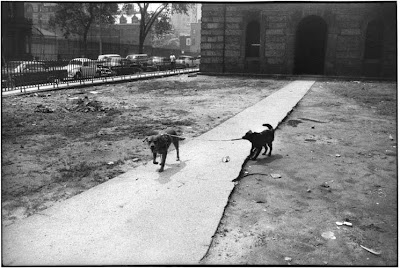 New York, 1965, Garry Winogrand
Thanks to everyone who voted in the tournament. It was a big experiment and I wasn't sure what to expect, but now that I have a sense of how something like this can work I plan to set up other photography polls with hopefully less predictable results. Three cheers for uncertainty...
Posted by Blake Andrews at 8:15 AM