In a Facebook posting few weeks back, Andy Adams questioned whether Facebook was replacing photoblogs. While there may be a trend in that direction, I don't ever foresee Facebook totally eliminating the need for other sites. To me, Facebook is like the Walmart of community bulletin boards. It's a convenient one-stop distribution outlet, but it can't really replace carefully catered Mom-n-Pop storefront blogs. 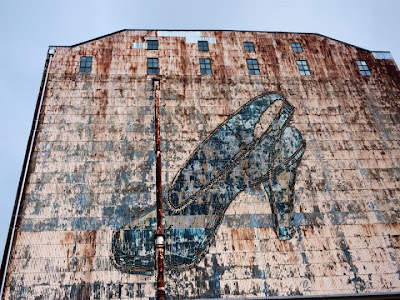 One photographer currently testing the bounds of this theory is Eugene's Craig Hickman. For the past few months he has been posting photos on his Facebook wall at a pace of roughly one per day. These are not the casual party snaps you're used to seeing on Facebook. They are serious photographic images from his ongoing series Fictional Photographs. A photographer for over 40 years, Hickman has gradually transitioned from b/w documentary to his current method of digitally montaging found artifacts, signs, and icons into beguiling scenes. The results are indeed fictional but you sometimes to need to look carefully to make sure. 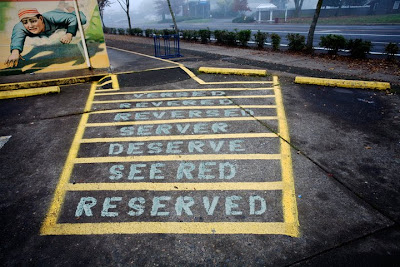 I know many photographers who post occasional images on Facebook, but I'm not aware of any that have taken to it to this level. Craig is using Facebook as an exclusive distribution point for work in progress, the way others typically use blogs, Flickr, or personal sites. If the idea is to get images out in the world —to non-photographers as well as photographers— via whatever forum allows the easiest and widest distribution, Facebook may be the best vehicle. 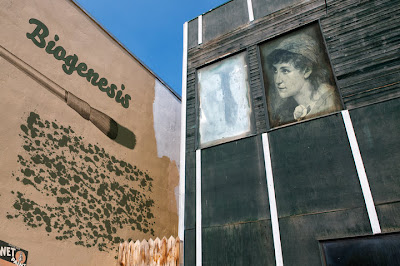 But a web-based jpg can't really tell the whole story. The good news is that Craig is also a master printer. Better yet, he is willing to send a free print to anyone who requests one. Go to Craig's Facebook page, review the images, and let him know which one you want. There is no catch, other than the chance to catch a quality photo. 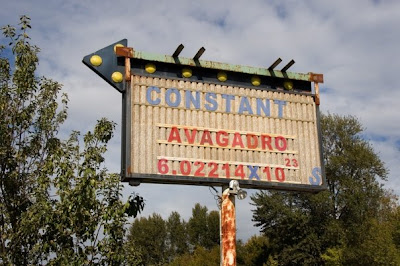 This method of distribution —a gentle reminder that the best things in life are free— seems like an appropriate counterpart to Facebook, and one of the few avenues able to compete with it.

(All photos in this post by Craig Hickman)
Posted by Blake Andrews at 8:45 AM

I think Facebook will not replace specialized blogs. It's the opposite. Blogs will profit from Facebook. In most of cases Facebook is used for posting links to other websites/blogs. So - at least to me - Facebook is just an entry to dive deeper into stories, photography, whatever. A starting point.

Sadly, Blake, I know that you can get a free print from this guy from facebook, but according to facebook's privacy rights, they can too.
"By posting User Content to any part of the Site, you automatically grant, and you represent and warrant that you have the right to grant, to the Company an irrevocable, perpetual, non-exclusive, transferable, fully paid, worldwide license (with the right to sublicense) to use, copy, publicly perform, publicly display, reformat, translate, excerpt (in whole or in part) and distribute such User Content for any purpose on or in connection with the Site or the promotion thereof, to prepare derivative works of, or incorporate into other works, such User Content, and to grant and authorize sublicenses of the foregoing."
quoted from Andrew Flusche's website:
http://www.legalandrew.com/2007/07/21/facebook-and-the-law-8-things-to-know/

Thanks for the link, Dolly. I don't feel very threatened by Facebook but I can see how someone with marketable work might want to steer clear, since once it's on Facebook you basically sign away your copyright.

I think to some extent this is true of all web images. Not that we lose copyright but once something is online it is impossible to control what happens to it. Any musician knows this firsthand. I think our main protection at this point is that online images are too low-res to substitute for the real deal. But I expect that will change.

Even low resolution is only a limited shield. I made some prints for a test. 750x501px with 72 dpi. The results were not perfect, but good prints with 13 x 18 cm format. For a magazine the quality is nearly good enough for A4.
So the best thing is not to publish online ;-)

Here is Craig's response via email: