Stephen McLaren: What Was He Thinking?

Stephen McLaren is a photographer based in London. He is the co-author with Sophie Howarth of the upcoming book Street Photography Now. 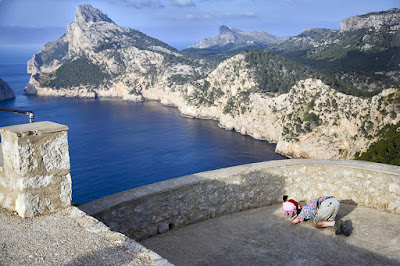 Formentor
"A holiday snap from Majorca, Spain. I'm a good tourist. I'll always search out the local beauty spots and this set of cliffs at Formentor draws thousands of people a week. That said, I'm always hoping that people will interact with the environment in unusual ways, because that's what curious people do. This German father and his daughter were having a great time chasing each other over the beauty spot and they found a hole in the viewing platform which enabled them to see the water crashing into the rocks hundreds of metres below. I just responded to their curiostiy and ensured that the huge mass of the mountainscape behind them remained in the frame to show how vulnerable they seemed. Very little camera skills required, just the enjoyment of people enjoying their surroundings." 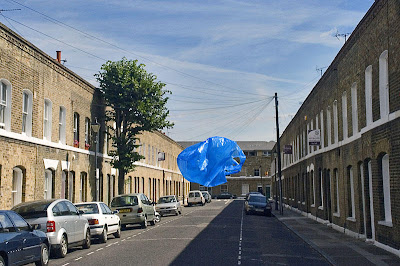 BlueBag
"A really bad Sunday morning hangover was the catalyst for this shot. I was en route to the local shop to buy breakfast but was moving at a glacial pace thanks to a throbbing head. I found myself staring at a blue bag which was aimlessly blowing around and was almost taunting me for my lack of mobility. In order to get my eyes working properly and out of curiosity as to where the bag might lead, I followed it around the block with my camera snapping away haphazardly. One second it was rolling in the gutter, the next it was pinned to a fence and then with a sudden gust it was airborne and I ran after it trying to frame it with the sparkling blue sky. By the time I got home, my hangover was only partly relieved, but on looking at the back of the camera's screen I knew that the aimless chase had been worthwhile. The street I live in looks almost identical to this one, so even though in hindsight the image is a bit cheesy, this shot always reminds me that a bad hangover shouldn't stop you taking your camera outside and celebrating your own neighbourhood." 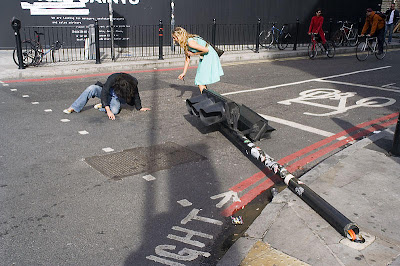 Blame
"Another drink-related shot I'm afraid. I love this corner. It stands on the boundary between the street market of Brick Lane and London's financial district. The corner gets good light, a wide range of people passing by and it also happens to have a quirky pub on the corner which lets you take your drinks outside and watch the world go by. One busy Sunday afternoon I was standing there pint of Guinness in one hand, camera in the other, not really expecting anything out of the ordinary to happen. Well obviously something did and I just happened to be standing next to the man who ended up falling on the tarmac. I don't think anyone who has seen this shot has correctly guessed the chain of events and yes I have several shots of the drama as it unfolded so I could show you the whole narrative, but where's the fun in that? I'm loathe to say precisely what happened other than to confirm that the lampost did not fall down of its own volition. I like this shot so much because of its ambiguity. Much street photography can be very explicit but I like people to spend as much time as possible trying to work out of a very human puzzle. I was obviously thrilled that the guy's girlfirend in a pretty blue dress came to his aid and that too red-clad cyclists were lurking ominously in the background. Needless to say, I have a hard job convincing anyone that this was set-up. Pure mindless reaction and getting my glass out of my hand so I could focus properly was the key here." 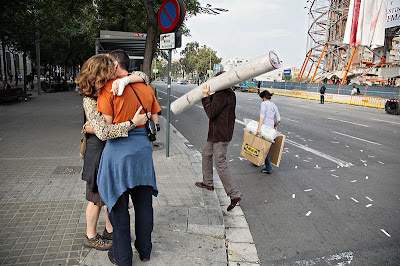 Clinch
"What a great day for taking pictures this was. I was in Barcelona on holiday but had gotten bored of the beach and so wandered up-town to where a huge house and home expo was going on. People were buying insane amounts of household stuff and carting it toward their cars and buses. I was a little lost which is a state of mind I really like to have in a foreign city and was just following people around almost at random amused at how many bags they could carry on a hot and steamy day. There was also a political demonstration going on at the same time which seemed to charge the whole location with a sense of hilarity and chaos. I decided to follow the man carrying the carpet as he negotiated a busy roundabout and then noticed he was catching-up with a bag-laden woman. So oblivious to the traffic we reached the other side of the road and I aimed to get the guy stepping onto the pavement and noticed a couple embracing on the left of the frame. Obviously getting three subjects in one frame is a photographic challenge in itself but to get home and realise that the woman in the embrace has a broken finger and that her partner is a photographer added to the intrigue. I'm sure I'm like many street photographers in enjoying following some individuals around just because you have a gut feeling that something is going to happen to them. Obviously that often doesn't pan out, but for some reason Barcelona was kind to me that day. I think I got four good shots in less than an hour that morning and put it down to that feeling of being lost and being a bit bewildered by the events going on around me."

Off-Balance
"I spend a lot of time in London's financial district trying to make sense of the cataclysmic events that un-furled from there a couple of years ago. I initially thought in my naivety that men in suits would be falling from their executive roof-terraces. But no, they are shameless people and have carried on with the same devil-may-care attitude they always have. So I am looking out for smaller details, bits of body language, feral habits etc and this shot fits in that mould. I have used this little gap in the fence myself to save all of two seconds but it's amazing how many of the suits use it to speed up their day. So one day I stalked it during lunchtime and eyeballed everyone who passed through. As usual I was ignored and the guy in this shot was so wrapped-up in his own little world of financial crisis that I'm sure his squeeze was un-troubled. The fact that he is sucking-in his cheeks in order to fit his rotund frame more efficiently through the gap makes me smile. Sometimes you can get stopped by the police down there for loitering near banks but I'm past caring and it's my theory that if any institution needs photographed these days it is those non-transparent, subsidy-junkies that pass themselves off as models of financial probity." 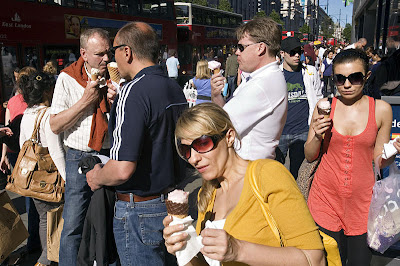 Cornetto
"This came about during one of those street photography exercises that friends occasionally recommend and which I regard as the equivalent of going to the gym. So today's assignment was to stand outside Bond street tube on an ultra busy Friday afternoon in high summer and refuse to move from one spot on the pavement. After thirty minutes of shooting nothing and almost being run down by crazy shoppers I started to notice little moments of possibility amidst the stampede. The tube station is right next to an icecream seller and it became apparent that as the temperature rose he was doing more business. So first shot I get two people licking a cone, next shot I get three, then two women similarly engrossed in their treat appear from nowhere and make it a party. OK it's just a shot of people eating ice-cream on a hot day but I was pleased that I managed to make a very quick observation by not moving from that one little spot. People do think you are slightly deranged though by refusing to deviate from the oncoming human traffic but there is a lot of satisfaction to be gained if you are at f8 or more and committed to one viewpoint. It certainly makes your photo-brain work much harder." 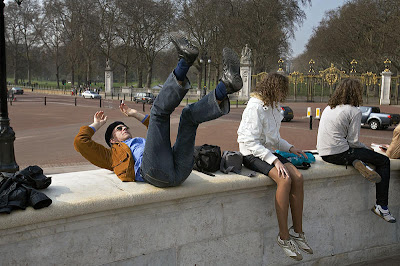 Jiggy
"Many visitors will recogninse this shot as being from Buckingham Palace. Strangely this is a very difficult place to take pictures in London. Everyone is a tourist, the location is so familiar and if truth be told, I am an anti-monarchist and would like to evict Queenie at the earliest opportunity. Anyway, sometimes when I am running out of ideas in London I will go to Buckingham Palace and see what the tourists are up to. Its like going to the zoo I suppose. This shot comes under the 'people do the funniest' things banner. He was about twenty yards from me and started to stretch his hamstrings in various ways, obviously from a full day walking the tourist-trail. Realising that his movements were becoming more and more vigorous I ran straight towards him muttering 'keep-going' and when I was about eight feet away he did one final flourish as if he was a dying fly and I got my shot. No one batted an eyelid and I walked straight by. In my imagination this guy was beamed down from an experiment going on in a nearby spaceship just so I could shoot him. One from Richard Kalvar's Earthling photo-philosophy." 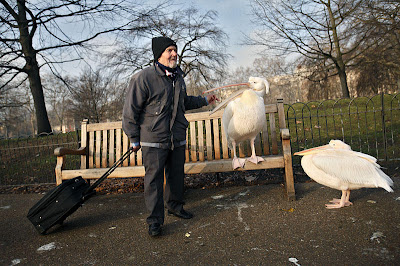 Pelican
"I'm a real sap for the pelicans in St James's Park. I see them a lot and I've got loads of decent shots of them. I'm sure the biggest one recognises me as when I visit I swear he looks at me intently before waddling over in my direction. They are really cheeky animals and I'm sure they think the park and all it contains is their private property. On this midwinter day they were staying warm by avoiding the icy lake and standing on the park benches. As you can see from the stains on the ground, they use it as a toilet as well. Many people who use the park are quite lonely older people who feed the animals most days. This guy seemed very familiar with the birds and tried to stroke one, but the thing with pelicans is that they are eating machines. Put anything within their orbit and they will snap at it. There are lots of people outside the frame watching this incident but they know not to get too close to these fellas."
Posted by Blake Andrews at 7:21 AM

perfectly explained to keep you guessing. I really like McLaren's work, thanks for this...

very nice, thanks for sharing :)

I also lile his restrained and natural use of color and the unpretentious formal attitude of his pictures.

The "blame" is my top pick but the others are not inferior in any way.