How good is your BS detector?

Which is which? The first person to correctly identify the four real critiques receives a free print, plus a tongue-in-cheek fake critique of whatever photograph they choose. Good luck. 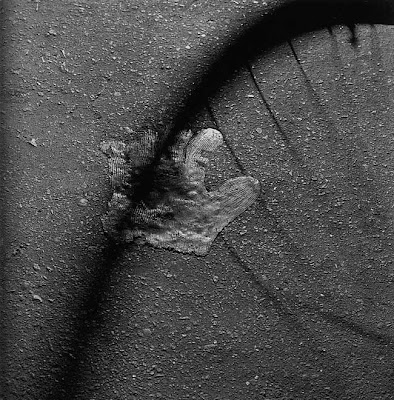 1.
This is nothing more than a shadow thrown by a bicycle wheel on the remains of a glove, trodden into a gritty pavement. Without the shadow of the valve, it would have been a different picture, and quite possibly meaningless. However, that small mark, interrupting the rhythm of the spokes, points to the inflation of the tire, and thus to exhalation and breathing itself. The glove in turn signifies the hand. Taken as a whole, the ensemble invokes the distant idea of human being. The photo recalls cubist art, with its wealth of reference to human processes, expressed through items from daily life: glasses, cigarettes, the folds of an accordion. 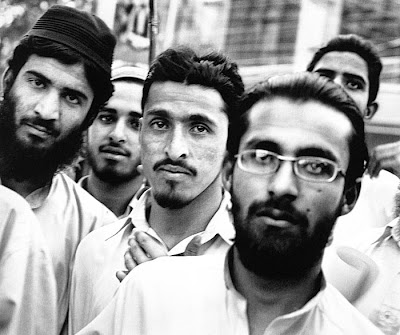 2.
With caps on and/or their hair combed back, while their faces are framed by the cut and size of their beards, it's interesting to see the way the photograph takes in the directness, the curiosity and contact of the men's eyes. There is nothing to suggest hostility toward the photographer...nor affection either. The faces, if only subtly, appear to project a collective desire to be acknowledged, if not also a curiosity about this stranger who stands before them, patiently using his camera to, for whatever reason, address their presence. It is, in fact, these odd contradictions between the photographer's commitment to his project and the interest of his subjects in being photographed that make for photographs that are tense and compelling, yet artfully elude one sure interpretation or reading. Yet, for the most part, we are constantly offered the photographer's genuine attention, if not necessarily affection, for the individuals he encounters. No matter how conflicted their circumstances, he refuses to give up on the race. 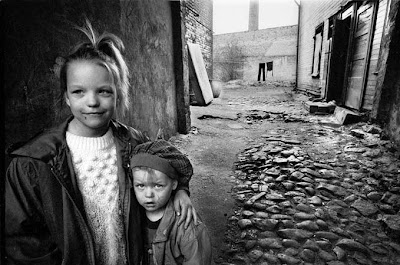 3.
The viewer's attention is cleverly drawn to the foreground, where a young waif and her charge share a moment of genuine affection. One could be forgiven for thinking them the subject, but one would be mistaken. Over the boy's left shoulder lies the real centerpiece: two jet-black items of laundry perfectly framed in a wild chiaroscuro of building and clothesline. From this distance their character is indeterminable. Is it a matching Sunday suit? Silhouetted tatters? The charred remains of last night's fire, always, always with its inadequate warmth? The shape is a mystery, yet also, tantalizingly, it is the unifying visual element. We can't identify it, but we still appreciate the photographer's deep compassion for the children and their miserable circumstances. To translate this compassion into a photograph requires years of training, dedication, and sacrifice. 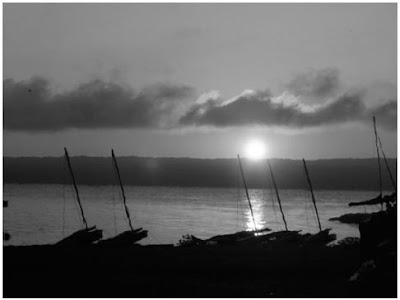 4.
Is the sun rising or setting? Are the clouds advancing or receding? Black and white photographs aren't always so black and white. In this minor masterpiece the viewer must internalize the image, process it, and create his or her own meaning. It's not enough to view this photograph...you have to experience it. Are you brave enough to gaze into the sun? 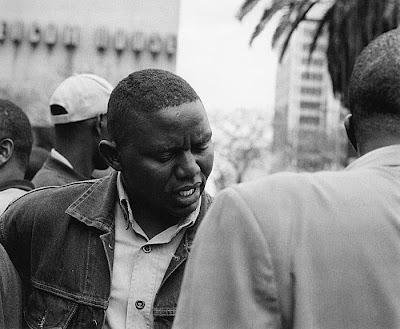 5.
The flex of this man's shoulder, the flare to his double-stitched denim jacket, the assertive tilt to his head, and a mouth that is ready to pronounce —it would seem— an end, a vanquishment to the forces that have brought violent and destructive mayhem to his city. Against larger odds and experience, his face projects a confident, wise and insistent sense that "we will take charge of this. This cannot continue." 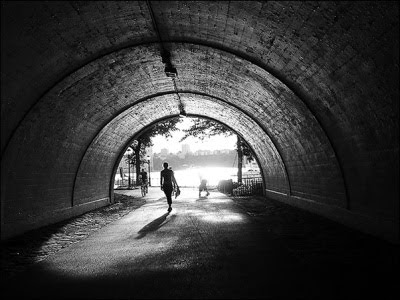 6.
A woman passes through a portal to a simpler time, a time of crystalline beauty in dazzling black and white – which is the language of memories and, as many say, of dreams. The message of this photo seems simple, perhaps too simple. Perhaps too beautiful. But can one fault the photographer for wanting to bring simplicity and beauty into the world? Not in this case. Not when the message serves as cultural salve. The ancient viaduct made of cobblestone reveals fears close to the current anxieties, tells us of histories of forgotten ancestors who had entrusted their tales as well as their hopes in the melancholic essence of this landscape, and tells us of the displacement, perhaps even more profound, of the present generations, always looking for that something to which you can not give a name, not yet. 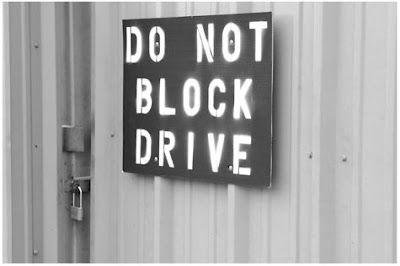 7.
The eye is drawn to the sign and its cry for help. "Do not block drive." It begs us to examine what is blocking our drive. It's easy to believe we are resigned to this black and white life, but look closely at the picture. Notice how the letters go outside the lines just like the writer is trying to break free of the locked door. Delve deeper to see the play between light and dark highlighting the symbolism of the text. The washed out effect from the letters is our light within trying to break through. The photographer could have shot this head on, but chose the angle to emphasize the padlock - the darkest part of the photo...the darkest part of life. The lock in the shadows is the darkest parts of our lives; addiction, abandonment, orphanages, greed, metaphorical blindness. That darkness is the secrets and secrets locked deep within each of us - the darkness chaining our drive. 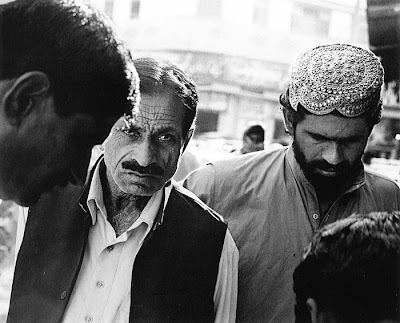 8.
There is a stark contrast here, but a clear companionship between the man with no hat and the man with the cap. The cap is elegantly bejeweled and embroidered, as if to suggest the memory of a still-living kingdom of such royal order and beauty that nothing could ever betray its God-given power and authority. The eyes of the man with no hat, however, reveal no such faith. One eye appears aggrieved, while the other looks defensive and ready to fight, and each eye looks in a different direction. The portrait of the two men offers an aggregate glimpse of contrasting postures toward a world on the edge of possible decimation.
Posted by Blake Andrews at 7:16 AM

Four are real? God help us all ;-)
I recognize one from another site, and it was a parody there, so does that count as real or fake?
Fun post,
Jon

Should make this a poll, too.
(Would be interesting to see the averages.)
There's definitely a whole lot of BS in there, real or fake.

Good guesses, though no one has gotten all 4 yet.

The intentional parody critique counts as a fake.

...because 1, 3 and 6 are decent photos. The last one was harder but "darkness chaining our drive" clinches "real" spot number four for me.

If 4 is real I might just have to give up this whole writing about photography thing in total despair.

Congrats to Marc Feustel for his correct answer. 1, 2, 5, and 8 are real. Thankfully he won't have to give up writing about photography.

Marc, please email me your address and an image to be critiqued and your goodies will soon be in the mail.

As for sources, critique #1 is from the Phaidon 55 book on Shomei Tomatsu by Ian Jeffrey; #2, #5, and #8 are from Stephen Vincent's critique of Leo Rubinfien in Black and White Magazine, October 2009; #4 and #7 are from http://www.thousandandonewords.com; and #3 and #6 were written by me borrowing various critical phrases from other essays.