It didn't take long in Paris to realize we were in a new culture. We arrived at Gare de Nord around 11 pm, slogged downstairs to the Metro, and hopped on the first train to Place de la République. Stepping onto the Metro car was like walking into a softly lit Parisian club. People were seated facing each other in clusters of four as if at a cafe. Arms were thrown around various body parts, and there was a dim murmur of happy French chatter. A dog watched the scene near a man smoking a pipe, and even though the subway car was quite warm everyone seemed to be wearing a coat and scarf. I felt like I'd walked into a Prada ad.

A ten minute walk from the subway brought us to George's apartment, which he has kept since his Parisian expat years in the late 80s. It proved to be in an ideal location in the 3rd Arrondissement about halfway between Place de la République and the Picasso Museum. Everything was within walking distance, and I believe we made it on foot to every other arrondissement. 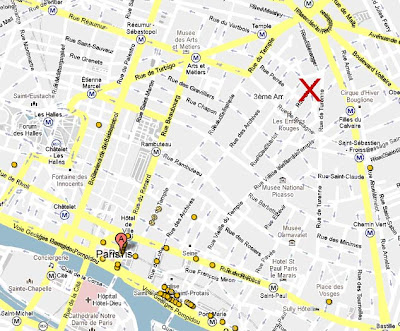 The red X shows roughly where we stayed
We had our own place but it was far from luxurious. The only furniture was a bed which we divided. I took the boxspring to one corner and George put the mattress in another. After a day George managed to turn on the electricity and hot water. Of course there was no internet. For that we were at the mercy of neighboring wi-fi clouds. Sometimes we could piggyback on a nearby network. More often there was no access, which meant we had to visit the corner cafe and buy a $6 cup of coffee to hop on their cloud. Perhaps the best feature was the lack of phone or TV. To live for 5 days without either item was an absolute pleasure.

Our daily routine in Paris was pretty standard. Wake up, eat cereal, load film, grab a cafe creme on the corner, and spend the day walking and shooting. Although we were active, our pace was generally more relaxed than the craziness of London. We had 5 days instead of 3, no appointments, and a smaller, denser downtown core to navigate. In some ways we were more like conventional tourists. We visited the normal historical sites and actually had time to see several photo shows. There was a great Willy Ronis retrospective at the Mint, a strange show of 1960s Doisneau color in another gallery, a strong photojournalist-style display of wedding photos at City Hall, plus a smattering of other shows around town. 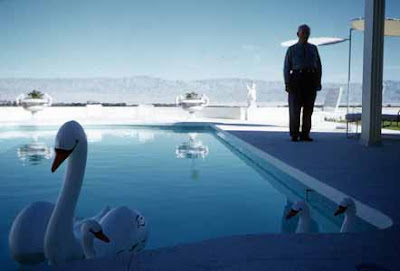 Palm Springs, 1960, Robert Doisneau
Unlike London, when I came across a bookstore I had time to browse. Paris is chock-full of good used bookstores, many specializing in art titles. They don't seem to suffer from the Border/B&N syndrome corroding U.S. cities. Unfortunately most titles were in French, but I still took home a few photobooks including in almost every picture #7 edited by Erik Kessels and Small View by Gu Fan, neither of which I'd seen in Oregon.

Since I don't speak a word of French I was at a disadvantage in Paris. George (fluent in French) became my fixer/translator/guide. Instead of separating as we'd done in London, I kept a close eye on his whereabouts and stayed nearby, at least for the first few days. This created an interesting dynamic photographically. Since we were often close to each other we saw many of the same things. Sometimes one or the other of us would duck out of the way and let the other guy have it. Sometimes we'd both shoot the same subject. And of course we shot many things on our own.

I'm quite curious to compare the results. I trust that George and I have unique enough visions that the photos will be separable. I've shot within a yard of him before and our photos look like different planets. In street photography, even five feet or five seconds of separation is enough to create entirely different photos. But I've never shot streets paired up with someone for some an extended period. I think the resulting photos could be very interesting. 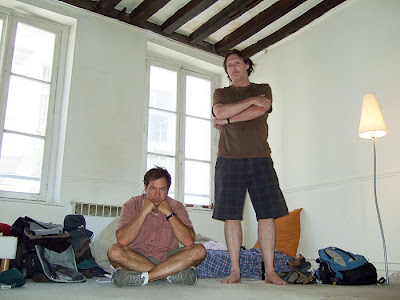 George and I in George's Paris apartment
I found photographing street candids in Paris to be pretty straightforward. George had warned me beforehand that Parisians would be resistant since apparently many are aware that French law prohibits publishing unauthorized photographs. So I was leary at first. But in practice it wasn't much different than London. Street is street. Most urbanites have seen it all and have learned long ago to tune out most of what's around them, including photographers.

I think the main difference moving from Paris to London was in the character of the terrain. Parisian streets tend to be more congested than London with narrower sidewalks. There aren't many open vistas outside the river and and Haussmanized areas, and in fact the city is so dense that you can't even see the Seine until you're almost on top of it. So there was a lot of close shooting which demanded severe concentration and anticipation, whereas in London it was a bit easier to sit back and scout before proceeding. In London I could shoot while listening to my iPod. In Paris this was impossible.

As in London, I carried work prints and distributed them when I thought of it. I put them mostly in phone booths, and occasionally on the Metro. I saved one of my few portraits for Nadar's grave at Père Lachaise. 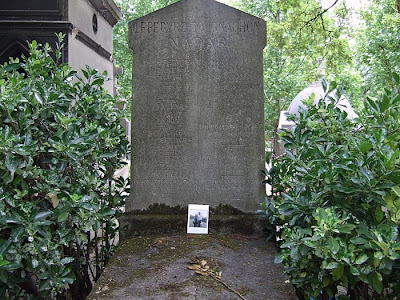 Félix Nadar's grave with workprint
The work print idea was fun, and in fact I've continued it since returning to the U.S. I have reams of slightly mis-exposed work prints in my office, a steady supply forever. The only problem in the U.S. is finding phone booths to stick them in. They seem to be nearing extinction here, which makes them all the appropriate for placement.

After my London post I know what some of you are wondering. How was the beer? Generally awful. The French just don't get beer. Like much of the developed world, they still labor under the illusion that wine is somehow a more sophisticated drink than a cold brewski, and in fact they've built an entire industry based on that fallacy. Beer is seen as second class, maybe even third class. And if you order a beer in English you're really scraping bottom. I tried circumventing the bars by buying a six pack at the local market, but even that was difficult. They stock beer at room temperature with other staples like baby food and peanut butter. If good beer was scarce, cold beer was even scarcer. On my next to last day I finally found a market with a refrigerated 7.5% local Amber. Best beer of the trip, but it came slightly too late.

That seemed symptomatic of my last 24 hours. The whole last day my timing felt off. I kept seeing scenes a moment late or moment early, and never at one of those delicious in-between moments that photographers crave. I missed one man on a delivery truck just as he jumped off the rear gate. It would've been a surreal shot with extra limbs. But I zigged when I should've zagged and missed it. That happened all day long. I couldn't find the right 1/500th of a second to fit reality into. Looking back now, I think my body was probably anticipating the upcoming jetlag. 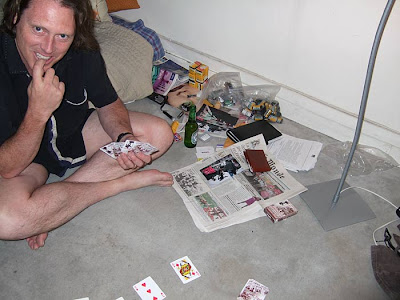 La Monde de George Kelly
I hopped the 9:00 Eurostar to London, arriving at 11:30 pm, shuffled over to the Tube, took the first train to Heathrow, and realized my Prada campaign had ended. The two sides of the train faced each other at a slightly cramped pitch. Tabloids littering the seats blared about a Taxi-cab killer. There was a man nearby drinking from an open container. No one spoke. No one wore a scarf.

I found a row of seats in Arrivals that made for a makeshift bed, and at daylight boarded the first in series of planes back home. The middle leg offered Annie Hall as a movie choice, but since my timing was still off I had to see it out of order. It was on continuous loop. I started watching when Alvy and Annie visit L.A., then stuck afterward around to see the beginning.

Annie Hall is a brilliant film. I have no idea how it won Best Picture. Woody Allen anticipated Charlie Kaufman by about thirty years, experimenting with many of the same devices, the play within a play, the endless self-examination and self-referencing, and actors breaking out of character to speak directly to the camera.

In photography this is routine. Most portrait subjects stare at the camera and acknowledge it. Even in non-portraits it's difficult for the camera not to seem integral. But in film, outside of Woody Allen, Ferris Bueller, Bugs Bunny, and few others, the fourth wall is virtually impregnable. Why is that? 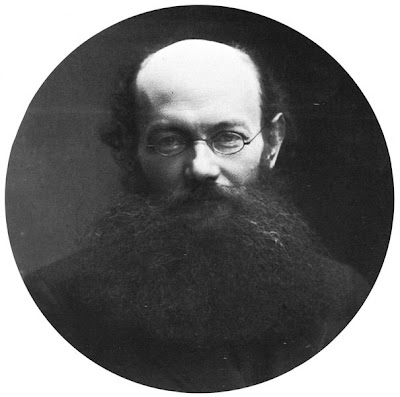 Peter Kropotkin acknowledging Nadar's camera
Maybe it says something about the difference between film and photography. Film is a charade, a diversion, a short-term trip abroad from normal reality. Photography? I have no idea.
Posted by Blake Andrews at 9:28 AM

Beautiful inspirational article. I wish i was lucky enough to grab one of the photographic prints you had left around.

Yeah, in France some of the amber coloured stuff is good, and the lager is about the same as British lager, so just avoid unless you want a light summer refreshment. Then they also have really strong stuff, like the Dutch supermarkets, which comes in a range of qualities but tends to be awfully sweet if wrongly picked (Duvel would do, though!). We'll point you out some proper beer when you're around next time, though.

On the other hand, French wine is not bad! A peppery Cotes du Rhone will do for me.

Thanks for sharing very article with us, all photos are very unique and beautiful.