I
This interview with Paul Shambroom was quite interesting. I was disappointed it didn't generate more discussion when it was posted a few weeks back. Shambroom sees a fundamental shift in what it means now to be a photographer. In a nutshell, it's a shift from hunter to editor.

"In the brief history of photography," says Shambroom, "175 years or so, a lot of it has been going out someplace and bringing back your image as a trophy, as a spoil or as a treasure and I think those days are ending pretty quickly." 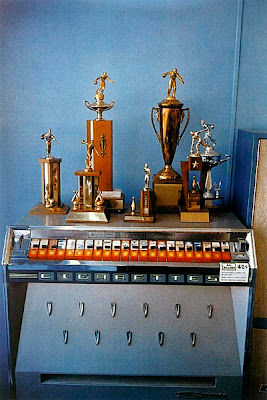 Memphis, 1968, William Eggleston
One of the original trophy hunters
Shambroom's photos courses at the University of Minnesota follow his philosophy, focusing as much on digital sleuthing as on imagemaking. One exercise requires students to hunt photos online in locations based on the random zipcodes. This is the skillset being taught to the next generation of photographers.

I don't know if image making will totally die off, but I do think the era of the iconic image might be over. This fact was brought home to me several months ago when Bryan Formhals asked in a photo forum, "Name an iconic image from the past few years." I realized I couldn't think of any. Abu Ghraib? OJ Simpson's face? None of them seemed to fit.

It's not like it used to be. When Ruby shot Oswald or when the V-Day soldiers returned, an iconic image was created that we can all think of instantly. But now every event is likely to be recorded by multiple cameras. These images are stirred into the info megastream, and very few are likely to stand out over time. 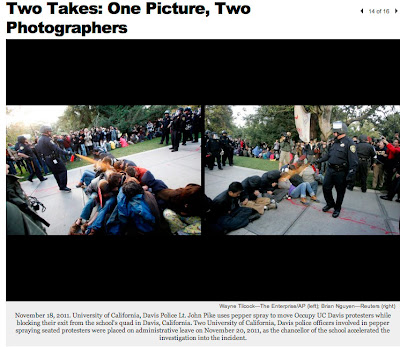 Time Lightbox, Phil Bicker, 12/28/11
This might be why Shambroom's path looks tempting. Why bother trophy-hunting in the real world when a keyboard and monitor might lead to more interesting material? Of course some digital editors still follow the trophy hunting model. Rafman, Rickard, and Wolf are among the Street View pioneers, but as far as I can see all use a computer in the traditional way, to search for singular moments. Although the curation is sometimes interesting, the motivation doesn't seem much different than less highbrow edits. It all amounts to trophy hunting. 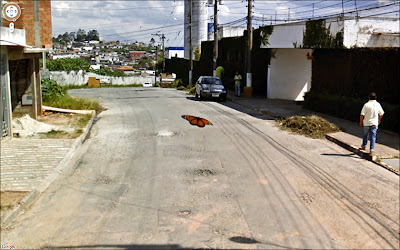 II
An alternative Street View application is rephotography. Iconic photos may be more difficult to create now, but that doesn't mean the past isn't still littered with them. For photographers it's quite natural to investigate these past photos from a modern perspective. I've written about a few cases, and I keep a file on whichever ones I encounter. Here's a map of the ones I'm aware of. Please let me know of others and I'll add them to the map. 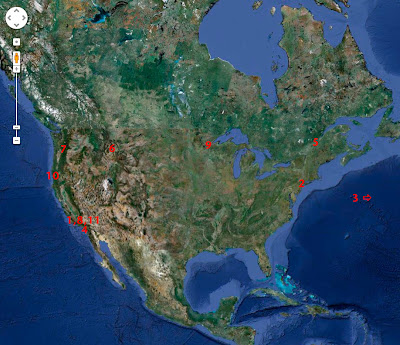 I suspect these are merely the early pioneers in what will gradually become a flood. Perhaps in ten years we'll see Street View rephotographs of Street Views.

Then there's Stephen Shore. For Street View rephotographers Shore is a goldmine for the simple reason that most of his seventies photographs are clearly labeled with an exact street address. Google searching is a snap. Dalton Rooney was first on board with this post (8). Kip Plaslowicz Street Viewed Stephen Shore in Minnesota here (9) . Justin Hamel Street Viewed many Shore photographs here. And I've tried my own hand here (10) and here (11).

Normally this would be the part of the play where the dramatic resolution takes place. Boy reunites with girl. Maybe they share a bed. Or it's implied. But it's not like the first two parts developed any dramatic tension. I mean let's face it, this isn't even really a play. Play on words maybe. But I'm not sure the three act structure is appropriate for a blog post. The first two acts sort of relate. The iconic thing has legs. Could be developed. But as written the play thing seems forced. No dramatic arc and the third part doesn't fit at all. What's my character's motivation? Just not feeling it.

[A Tomato is thrown onstage. Then several more.]


You do realize if you throw a tomato at me it's only going to ruin your monitor.

[A piano falls onto the stage from above]

Tough shit. I've made it a play so deal. You try coming up with this stuff day in day out. You try keeping it real. Try keeping it playful. Sometimes you're off. It ain't the first time. So big whoop. Excuuuuuuse me for not being Mr. Perfect. Call me a drama queen, whatever, but don't blame me. I don't even work here. Anyway, send me some Street View rephotography if you know of any.

Posted by Blake Andrews at 7:38 AM

It's a fad, Blake, a passing fancy that will be forgotten before most people have even heard of it.

My kid and I sometimes rephotograph pictures from my photo books with street view. It's a fun game. A little like geocaching. The trick being to select originals that offer just enough clues, making them tough but not impossible to locate.

Woman in Audience: [Shouting at closed curtain]
Boooo! Boooo! I paid good money to see the end of this theatrical production and I damn well WILL see the end. Now get your ass back out and finish it!
[In the silence that follows a soft fart can be heard somewhere near stage left]

"The act of photographing had more to do with explaining the world to myself than explaining something to someone else". Christopher Anderson, Magnum Contact Sheets.
As say the quote, I don't share Mr. Shambroom way of view. He is talking about an interpretation of editing things not feeling when we are shooting at moments. What joy can we have editing and not making the photos? yes, you avoid mad people and the rain and cold or extreme hot days. But what is life without that?

But at the same time I want to say thanks for your title, this make me thing more about motivation. The answer is blur by now. Something to chew.

Two things that are immediately evident to me: 1. Blake Andrews is the wittiest photobloggers on the net (let's see someone street view that!) and 2. Paul Shambroom must die.

This puts to the test my long-held feeling that a strong reaction is better than no reaction: "Paul Shambroom must die." Anonymous, rest assured- I will.
(Should I be creeped out by this?)

Paul, please don't get creeped out by the comment. If it's any consolation I'm planning to die too at some point (hopefully far off).

Thanks Blake. Strangely, I kind of like it. I've secretly always wanted to receive a death threat, especially a non-credible one. It WOULD be more satisfying if it was in response to a more righteous stance (against racism or genocide?) rather than such a trivial matter as the death of photography.

Seriously, just to clarify- While I stand by everything I said, those remarks were intended to be a provocation to start the conversation going. As I said in the interview, I intend to continue making original photographs and believe that people will continue to produce interesting and beautiful photographs with cameras for a long time.