What Eggleston thinks I do 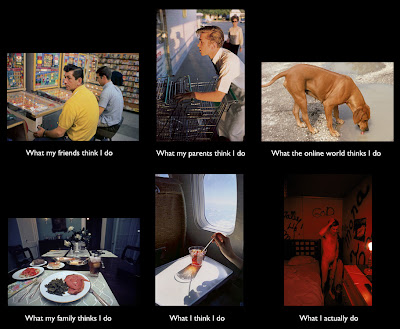 Posted by Blake Andrews at 8:54 AM

While this meme totally annoys me, I think this particular example is pretty terrific. Well done (or well found, whichever, although I am 98% confident this is a Blake original), sir, well done indeed!

Another great "Eggleston"-post! I already twittered a link to your social media-piece of art.

You are a quietly crazy man. I like that about you.

People who use the word meme annoy me.

The word meme is indeed a hot meme. I think it's been at least 30 years since Dawkins invented it and I'm not sure why it's caught on only in recent years. In any case it's a very fit word in evolutionary terms.

As far as crazy goes, I'm only as crazy as the next naked guy scratching his head in a red-lit room full of graffiti. There are a million of us out there.

the online world thinks you're a dog who drinks from a puddle?

If you know my online reputation, the puddle picture makes sense.

Got to say even if it looks odd especially the last pic of the guy... you pretty much nailed it to reality.