Several weeks ago I wrote about Enrico Natali. I'd found a nice old monograph by him on the used rack but was stymied trying to investigate him online. All I could find was "a somewhat thin website" with a small scattering of recent color photos. My local library also turned up empty. 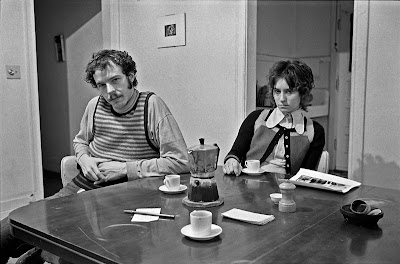 A portrait from Natali's recently revamped site
What a difference a month makes. Since that post Natali has revamped his site, adding many older photos from 1960s. He's scheduled to have two solo exhibitions this year, his first in four decades. To top it off, Nazraeli has just published a book of his early photos, New York Subway, 1960. I thumbed through it last week at Ampersand and it's nicely done. I know the New York subway genre has since been beaten to death but this is a good early example, shot before the publication of Many Are Called or any other serious subway book. 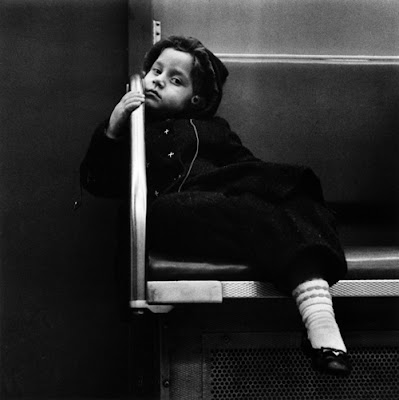 from New York Subway, 1960
I've had fun digging through the revamped site. I think there are some fine photos in there, along with a basic life chronology. It's been quite an interesting path for Natali, in and out of photography, Zen, family tragedy, various New Age disciplines. He's almost 80 now and still shooting.

I'm not sure why his work is resurfacing at this moment, but the fact that it's happening now en masse just as I stumble on him in a bookstore is kind of fun. It makes me wonder how that book wound up there. Maybe someone planted hundreds of copies in stores around the country. If true, a beautiful strategy. But unlikely.

I'm more inclined to chalk it up to the shifting cycle of anonymity and notoriety in photography, a cycle which is beyond anyone's understanding. It's a cycle I'll explore this week in a series of Lost and Found posts. Don't turn that dial, more on the way...
Posted by Blake Andrews at 8:38 AM

There is a world of difference between his old BW and recent work. Although I like the new photos just fine the level of post-processing reminds me of a typical camera-club Flickr photo. His subway photos are heads and shoulders above his recent work IMO.

And another boost for his earlier work. Although I find myself wondering if it's just because B&W work encourages me to look at shape and composition rather than content.

I think your attention made him popular again. You are probably the reverse of Cassandra, for photography.

Right, that does it: I've just ordered a copy of his New American People via . . . a website that I'm not going to name because I've just made the sad discovery that (together with another I'd naively been using) it's actually owned by Amazon. (Do US antitrust regulations do anything whatever to prevent monopoly?)

I haven't yet quite got used to this myself: hearing of some good, 15+ year old photobook and finding that there's no particular feeding frenzy for it and instead there are a pile of copies available for peanuts, just a few mouseclicks away.

The subway photos look good too, but the new book of them is expensive.

Curious what you think of New American People. As I said in the earlier post it's no classic but for $4 on the used market I think it's worth the gamble. Haven't seen the Landscapes book.