A few weeks ago at the U of O Library I was thumbing through an old Creative Camera compilation and stumbled on the work of David Freund. There were just three photos and no background information. 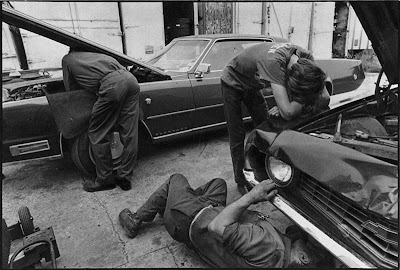 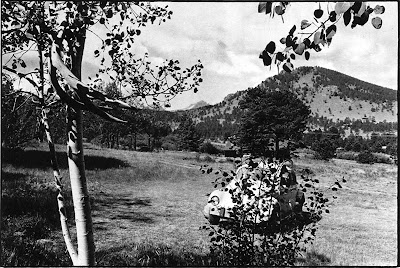 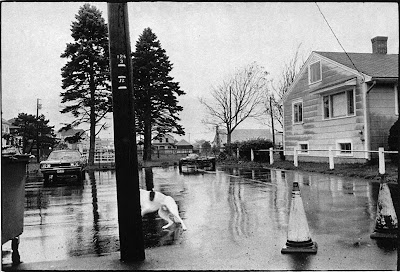 I found the first two photos interesting, but it was the third one of half a dog that really caught my eye. I think it's the best photo I've seen in the past several months. It has a loose snapshot quality but it's actually a very tight photo. Every element fits like a jigsaw. It's hard to plan a photo like that, harder to execute it, and harder yet to notice it on the contact sheet. If Freund was going to leave a photo behind as a marker in an old photo journal, a message to the future, that was a good one to choose.

So who was David Freund? He seemed to be something of a Friedlander-style formalist, someone who knew how to put shapes together, or at least did 40 years ago, but the only thing I knew about him were these three photos. 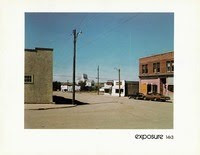 Digging online I discovered that he'd been featured in issue 14:3 of SPE's Exposure back in 1976. On my next visit to the library I tracked down the Freund issue. There were three of his photographs and a short introduction by none other than William Jenkins. The photographs showed the same strong jigsaw quality as the earlier three but the reproduction quality was terrible. There was no way I could make good scans.

I came home and did some more digging. I discovered that David Freund is not a wedding photographer in Australia. Nor is he a photographer in Edmonds, WA. No, the David Freund in question was a retired Professor Emeritus of Photography at Ramapo College of New Jersey. He'd chaired the art department and exhibited widely.

In 2007, he'd had a large retrospective exhibition at Ramapo. The accompanying essay by Steven Skopik can be found here but unfortunately all online images from the show are too small to give much detail. This one, for example, looks intriguing but at less than 300 pixels across it's hard to say for sure. 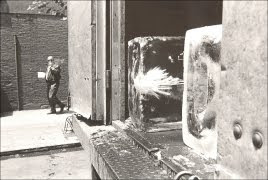 "Freund seems interested in noticing for us the world’s basic strangeness, typically by means of wry observation, telling juxtapositions, and provocative elisions," says Skopik. That description certainly fit everything I'd seen, but too much was being lost in translation. In Exposure and online the reproductions were too low quality to judge.

I contacted Freund. He was nice. He couldn't remember much about the dog photo except that it was shot on one of his annual visits to Maine. He offered to send a catalog from the Ramapo show. In the meantime, he pointed me to some of his images online here from a project shooting gas stations under an NEA grant. Although still on the smallish side, they're good enough jpgs to get a sense of how he sees. I like these two in particular. 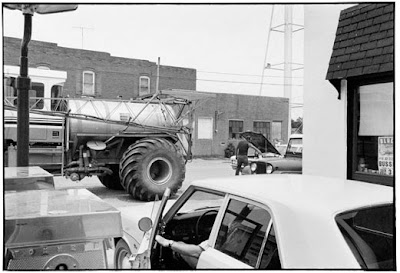 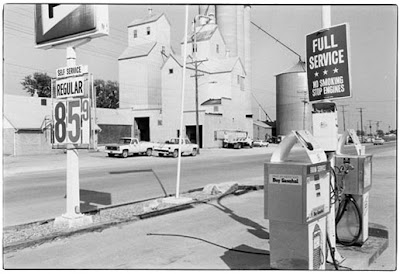 Ironically the best Freund reproductions I can find online aren't by Freund at all. They're from his collection of Japanese Matchboxes. Like most photographers, Freund appears to be something of a packrat, collecting "razor blade wrappers, hairnet packages, hot pot holders and whiskers from his cats," according to Design Observer. The matchbox covers, like his photographs, show compositional flair. 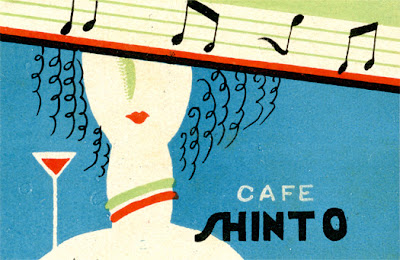 from David Freund's matchbox collection
Of course the Japanese have been at this a while. Stephen Shore in The Nature of Photographs makes a careful comparison between old Japanese woodblock prints and photographic composition. Maybe some of that design sense has carried over to matchboxes.

"Notice the leg jutting into the image..." writes Shore about the woodblock print, in a passage that might just as easily describe Freund's dog photo. "It typifies the sort of seemingly arbitrary cropping that occurs when the frame of a photograph slices through the world. While it doesn't relate to the unfolding drama of the picture, it does imply that this drama is a part of the larger world."

So I'm now awaiting Freund's catalog in the mail. I'm sure it will have better reproductions than anything I can find online. Perhaps I'll do a follow up post if it turns up anything interesting.
Posted by Blake Andrews at 8:43 AM

That was very interesting, I really enjoyed reading your post. His photography is very intriguing, usually I find a photo like that of that dog being cut off annoying, but it works great in his photo.

Another thing that seems to stand out to me is how there seems to be a "hiding" of faces. Like those mechanics you can't see their faces, the Beetle's "face" is hiding behind the bush and that dog's face is also hidden from us.

Thanks for sharing all that.

I agree, this was really interesting to read! Thanks for sharing.

Great story Blake - look forward to the follow up.

There's quite a few notable photographers (such as Mr. Freund) from the '70s and '80s that have been all but forgotten in this present age. I saw many of them- I just wish I had had the presence of mind to jot down their names and a short synopsis of their work.

Good post and always nice to get acquainted with new-old work.
I don't know if you noticed but in one of the links you've provided there are 2 photos in printable size tiffs!

Stan, you're right that many notable photographers from the past have faded into obscurity. This week I'm focusing on just a few of them but there are plenty more out there to dig up. Looking forward to other discoveries...

I'm sort of fascinated by what a black hole the 1980s are. It's like there's this 'valley of obscurity' for artists who are no longer young and new but not yet old enough to be dead and revered.

Also, I confess to suffering from a bit of 'if it's not been blogged about, it doesn't exist.' I'm guessing a lot of these photographers don't read blogs and don't even realize they are 'obscure.' We're the obscure ones to them.

I taught with David Freund for over thirty five years here at Ramapo college in Mahwah, N.J. He was (and still is) one of the best and most demanding professors to have taught anywhere. I have heard more than one of his students say that when they got to graduate school that the critques were not even close to the rigor that he demanded.
I have always been in awe of everything that he could see and record in a photograph(a few of which I have the good fortune to own. That you for recognizing his unique contributions to photography.
Jay Wholley, Ramapo College

Did you see this?

I know this was written awhile ago, but I just stumbled upon it while Googling my old professor. Dave was tough, but I loved what I was working on, so it never mattered. He taught me that, "The sure hand is cruel" and how to really look at something. Even though I spend my days sitting at a desk, every time I do pick up my camera, I think of the value he saw in my work and I'm thankful to have known him.

He now has a nice web-site: http://www.davidfreundphotography.com/

He's my uncle and I have been looking at his photos for my entire life. Besides all the things you've said about him, he's a nice guy.