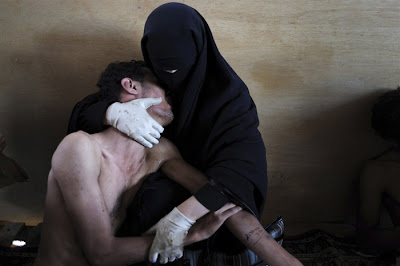 Much of the discussion I've seen has concerned the photo's religious overtones, in particular its reference to the Pieta archetype common in Western Art. There have also been comments about the West's inability to understand the East, Romeo and Juliette, Fatalism, Defiance, The Arab Spring, the use of gloves in wartime, and Spiderman Masks ("I come from a cultural background in which Spiderman, when he wants to declare his love to Mary Ann, lifts up his mask and becomes Peter Parker. Truth is revealed, anonymity, in a sacrificial move, is cast aside in the gift of one's face..."), among other things.

This commentary has been instructive but I think it overlooks something very essential: The photograph's compositional structure, which I think holds deep meaning.

Let's start with the central triangle formed by the head, elbow, and toe of the masked figure. It is outlined here in red. 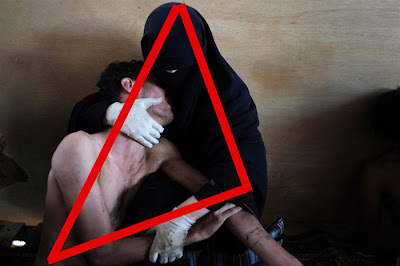 These three body parts are of great significance in Yemenese culture. In fact the popular children's lyric "Head and shoulders, knees and toes," is known in Yemen simply as "Head, elbow, toes". In the photograph Aranda plays on that symbolism by aligning the parts in an emotionally fraught Pythagorean stasis yearning to return to childhood innocence. The fact that the triangle is acute rather than obtuse refers both to the situation and to the idiocy of war.

Countering the red triangle is the shirtless man's own triumphant graphical triumvirate, a head-elbow-toe triangle shown here in green. 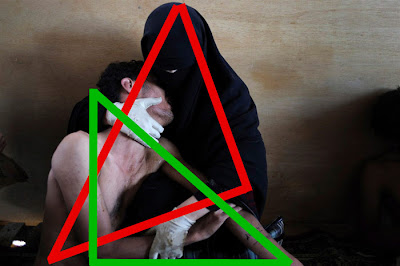 These triangles are like guerilla warriors. Not only to do they face each other but they overlap, their hypotenuses touching in a gesture which mimics the gentle embrace of the photo's starcrossed protagonists. If there was ever a moment when A2 + B2 equaled something or other we learned in grade school, this photograph bravely depicts it. The triangles show that in today's battlefield there is no frontline. The Maginot has become the crossed hypotenuse.

Green means go. Red means stop. The photo has one foot on the gas and one on the brake. Can you smell the stench of burning rubber so common in wartime? The photograph transports us. Together acceleration and retardation resolve to equipoise, a delicious tension which, even if it feels unsteady, is nevertheless stable, for now, for us, for this brief moment in all of eternity.

Aranda represents this eternity in the space to the right of the figures. Here a circle fits perfectly between the frame and the red triangle. But this no mere tangential figure. This is the void, with all its grander implications for human consciousness in the pursuit of truth. 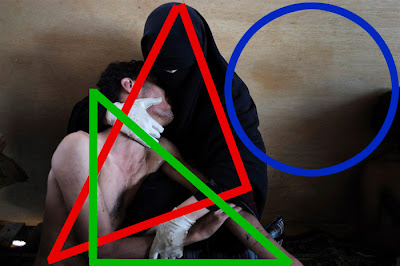 In the blue circle Aranda has captured everything that is not captured by the remainder of the photograph. A hint of shadow. Some funny brown stains. A burkha-ed shoulder. All the things which are beyond our understanding have been summarized in the way a salad summarizes a garden or, as in this case, a circle summarizes the quality of roundness. If acute triangles represent war, the softened arc of a complete curve counters with war's absence. What is the photographer's angle here? There is none. We've arrived at détente, the void.

Tying the image together are four axes of horizontal locution, three through the head region and one through both elbows. I've depicted them here as four yellow stripes: 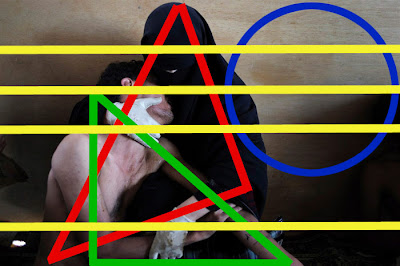 These stripes echo the four yellow stripes of the Yemeni flag. What's that you say? The Yemeni flag has no yellow stripes? Tell the truth now, you had to look that up. You had no idea what the Yemeni flag looked like. That's because Westerners are ignorant scum. We can never understand other cultures. We don't know or care about their flags so we draw yellow stripes wherever we want. On photographs or maps, it doesn't matter. To the cowardly imperialist cowboy they're interchangeable. But while yellow stripes might work for Aruba, Aranda subverts the normal power dynamic. By divorcing photography from realms of analysis that deny or obscure its essence, he ensures that his stripes wave freely.

Amidst the many grand demarcations listed above lie the photo's forgotten nether regions, depicted here with pink Xes. 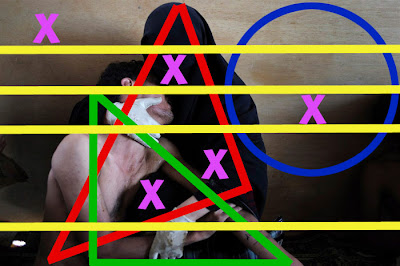 They rest like notes on a scale scattered across the frame, each in its own cell, incommunicado, unless these notes somehow develop code language like tapping the cellwall four times for a pack of cigarettes. The essential nature—or eidos— of the subjective experience of these Xes is defined by an irreducible singularity of the photographic image, as an index indicating, "that-has-been," to use Barthes' term. The photograph allows for the sight of self, not as a mirror but as an access point into a definition of identity—identity associated with consciousness, thus housing a whole; for it is in the photograph "where being coincides with self." Despite that, the Xes will never learn to communicate, nor will they acquire that cigarette which we could all use after wading through this analysis. They will never tap on the cellwall because they don't have brains, silly.

Finally, rising through war's ugly muck like a willful young Phoenix are the brightest hopes of our future, our children. In the graphic below I've depicted in blue the areas on the photo where my 6-year old managed to draw on it with a crayon while I was preoccupied on the phone. And then the little twerp denied it. As if! 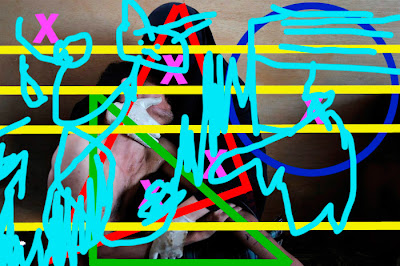 Here we have tapped into the optimism of youth's unconscious while at the same time denying all of these relations of meaning. If I look hard I can see a cat's face. Also maybe some barbed wire fencing holding a cow in a pen. I'm not really sure. All I know is this photograph will never be distinguished from its referent—that which it represents; it simply is what it is, just as war is always hell. So says the young child, and he speaks the truth. Sometimes mine does anyway, at least when it serves his interest.

And here I was thinking I was reading a serious and sober analysis. And then I remembered where I was....

I see my rapt mutation reseeds me.

I got scared reading. At first I thought it was serious, then I was whatawacka and then oh, oh, oh....

Interesting few sad facts on it.

I think there's an MFA thesis wrapped up in this posting.

Reminds me of the reviews Adam Marelli makes (which I like).

Did you know, Mr. Andrews, that your son is attempting to bring an outside party into this situation? Did you know that?

If you're referring to the crayons, Mr. Grady, that matter has been settled.

thanks, this was long overdue.
Wonder when those damn mathematicians are going to come up with a closed equation that evaluates how good a photo is.