I once heard the photographer Marsha Burns describe her process this way: "I used to worry about things like the edges and if there were dust specks," she said. "Now I just look for little fragments that capture my eye and I forget about the rest of it." 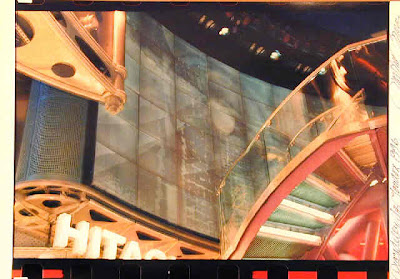 Picadilly Square, London, 1996, Marsha Burns
I thought of this quote today when I had the sudden realization that not one of my cameras gives me an exact sense of my edges. My Diana has a guesstimation viewfinder, as does my Noblex. My Mamiya was dropped several months ago. It shows two sets of framelines side by side and I can never remember which are the real ones. As for the Lieca, I've been shooting with just one lens for the past few years, a 40 mm. The viewfinder can show a lot of framelines but 40 mm isn't one of them. I know that it is between 35 and 50 but beyond that I have only a rough sense of where the photo is.

A few years ago this situation would've bothered me. But as I get older and my general outlook has shifted away from calculation and toward reaction I have learned to embrace it. I'm following Burns. Sure I could buy a camera with an accurate viewfinder but I don't think I want to. I like leaving the outer edges to chance.

This doesn't mean that edges aren't important. On the contrary they're often crucial. The arbitrary slicing of frame through reality is part of what makes a photo look photographic. Stephen Shore describes this effect in The Nature of Photographs:

Japanese woodblock prints use the frame in a way that is more reminiscent of photographs than of Western painting. It has been suggested that this was a result of the Eastern scroll tradition -- seeing the infinitely variable croppings that occur when viewing a scroll as it is rolled from hand to hand. Perhaps by examining what gives these prints their sense of photographic framing we can clarify what photographic framing is. 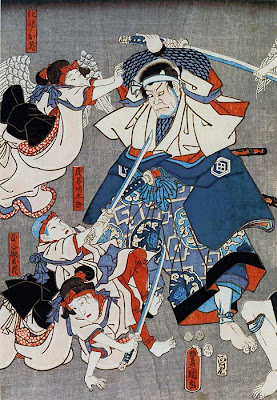 Notice how, in the upper right of the picture, the frame gives emphasis to the angel's hand staying the sword. The angel is described with the greatest economy: the artist has given the least information needed for us to read this being an angel. There is something slyly wonderful about our ability to make an interpretation based on this minimal description.

Now, notice the leg jutting into the image from the lower right. It is really amazing that the artist chose to add this. It doesn't relate to any of the action in the picture. It is entirely extraneous. It typifies the sort of seemingly arbitrary cropping that occurs when the frame of a photograph slices through the world. While it doesn't relate to the unfolding drama of the picture, it does imply that this drama is a part of the larger world.

I can think of many photos in which the deliberate choice of framing not only helps the image, it makes the image. For example, the right edge of this photo which passes through a sleeping man's face: 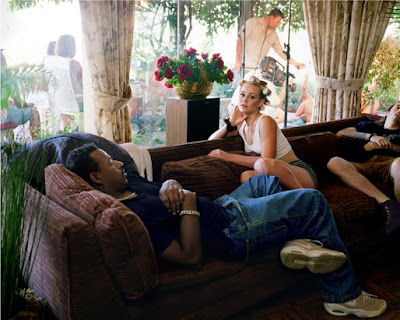 from The Valley, Larry Sultan
Or this wacky left edge: 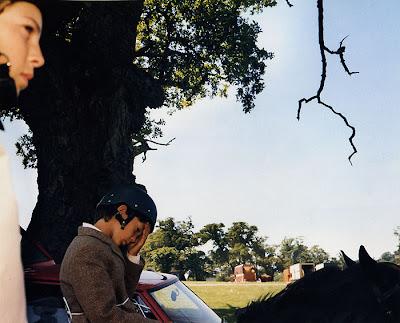 Design By Nature, 1913, Edward R. Dickson
If edges are so important, why do I leave them to chance? I think the answer goes to the root of why I take photos. The world seems to contain roughly equal amounts of chaos and order, and photographing is a way for me to explore the balance between them. Too much control and a photo feels static and boring. Too much chaos and a photo feels random and unauthored. When the balance is just right (and that balance varies for everyone), a photo works like a poem. Zap!

My process leaves a lot to chance. I walk around with a camera but I can't plan what I will find. I don't want to plan it. I'm a dumb atom looking for other dumb atoms to bump into, and anything that winds up on my film later is due to a certain amount of luck. That said, I am in control. I decide when and where to point the camera. Sometimes that instinct is very strong. My left brain takes over and I find myself hopping around to find just the right view, to line the photo up just right. I've taken a lot of photos like this and I think people generally like them, but the older I get the more they bore me.

I've tried various methods to escape my controlling instinct. I've shot slow shutter speeds and from the hip and with plastic cameras and all that.

I think imprecise edges are another way. No matter what I do, how carefully I compose, it leaves something to chance. I think it helps the photo look like a photo.
Posted by Blake Andrews at 9:54 AM

I think there's a lot of truth to what you point out about point and shoot framing. Only problem, for as many instances where you can demonstrate that it definitely enhances and reinforces spark and spontaneity in an image, you can find just as many instances where it weakens and distracts from the composition... And so we're forever left to our less than perfect balancing act.

I remember a few years ago when a friend told me that after you've been shooting for awhile you start to look from the edges inward, rather than focussing on what's dead in the center of the frame.

But shooting with a rangefinder, well, it's always a bit of a guess.

When I think about edges these days Friedlander always pops into my mind. I don't know why, but the way he's able to arrange information in a frame always gets me.

This is one of the most thoughtful observations on photography I have read in a long while. Having just spent over a month in Japan I did see quite a difference in the visual language, however, your insight on the Japanese woodcuts is excellent - yet new to me, as well as your ideas on the balance of chaos and order. Thank you very much, Blake!

an important topic and informative post...thank you. the image is the bottom-line, whether cropped in camera or in post-processing. For me, the context and content of the photo is everything and, as photography is deceptively about reality, the decisions can be difficult.

When I'm critiquing work in photo workshops, the biggest problem with student compositions is usually the edges. When people are first starting in photography, they need to pay more attention to getting them right.

Later on in our photographic lives, we can get them wrong, and they're still right. What is that famous Winogrand quote about content overwhelming form?