Looking Into The Past

Yesterday I visited Looking into the Past for the first time in a while. Guil3433 has taken over a big chunk of its recent history. His pairings are interesting, simply because rephotography is inherently interesting. 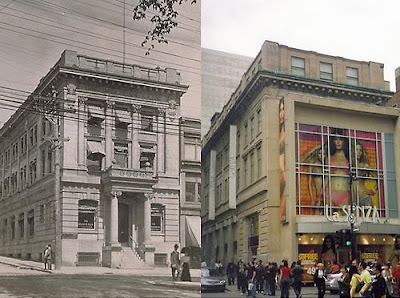 Molson Bank at the NE corner of St-Catherine and Stanley St., Montreal, by Gil3433
But for me this dyptich style doesn't have the same charm as the original flavor of Looking Into The Past, which put original prints smack inside contemporary ones, or vice versa, often capturing a hand in the process. For the first few months this was the only site's dominant model and I liked it. It was quirky and carefree. 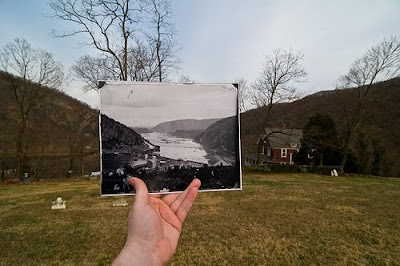 Harper's Ferry by Jason E. Powell
The change from dyptich to composite image mirrors the reverse progression of another well known rephotographic project, Mark Klett's Third View. In the early incarnations, Third View (and Second View before it) matched unmanipulated photographs of one location shown chronologically.

Photo by Mark Klett and Byron Wolfe; Inset by William Bell
If the first method can be compared to a band paying homage by playing a cover, the second method samples the original to create one track of a whole new song. Hiphop photography. Each way has its own charm but I think I prefer the integrated method. Maybe it's the photo-within-a-photo effect, and that I'm a sucker for meta. 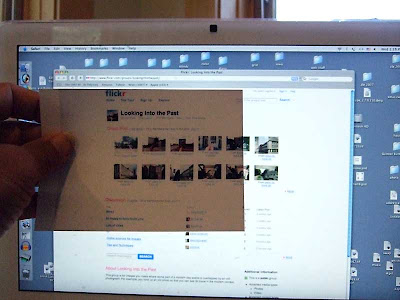 It would be nice to see Looking Into The Past look into its past and return a bit to its old style.
Posted by Blake Andrews at 8:16 AM

interesting post. i prefer the hip-hop way myself. the cover comparison reminded me of a recent blog post of my own, it's not exactly the same thing, but check it out if you have time: http://www.belgraderaw.com/luka/about-willy-ronis-and-a-certain-nude/