Was There a Jewish Eye?

The role of Jews in photography is a sensitive subject. It's hard to form any theories without being accused of either ethnic chauvinism or bigotry. Nevertheless it seems clear that the front ranks in photographic history, especially in street photography, are disproportionately Jewish. But why?

The critic Max Kozloff has explored the issue in several of his essays. Richard Woodward counters some of Kozloff's arguments in the 2002 NYT article below. Other than these two sources, this is a topic that doesn't get discussed much. Well, now's the chance. I welcome constructive comments, criticism, and reactions. 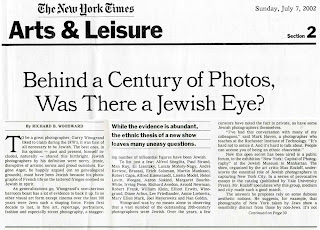 Posted by Blake Andrews at 9:00 AM

There are similar arguments in economics, re: the way that jews became "pariah capitalists" in niche areas of business (jews also formed the mainstay of communism, but that's another story). This clustering in niche areas of capitalism was especially true of genre publishing (e.g. American superhero comics, science-fiction, erotic magazines and films) in the USA during the 20th century. So there may be nothing exceptional about photography - it was just another niche way of using talent to make money while encountering less prejudice than otherwise. However, with photography there is also the added element of the 'lone wolf' aspect of making photographs, which must have appealed to those who felt themselves to be "outsiders looking in".

Remember that article well, and although there is no doubt that there was/is a large contingent of Jewish photographers, particularly represented in urban/street photography- it's a bit of a stretch to assume a particular Jewish "aesthetic"

While a photography student at the Kansas City Art Institute in the mid 70's this topic was talked about and made light of by both Gentile and Jewish students alike. However, we didn't think the phenomena was limited to photography. Further, from a curatorial perspective we felt it wouldn't have hurt to be a woman either. It was a joke...jeez.

I guess there are all sorts of theories about why Jews have been drawn into art photography, including the outsider/underdog angle explored in comments above. There's probably some aspect of truth to many of these theories, meaning that the cause can't really be pinned to one thing. But it's certainly fun to speculate.

I think the more interesting question is the one touched on by Stan B.: Is there a Jewish aesthetic? Kozloff says yes. Woodward says no. I find myself siding more with Kozloff, based mostly on personal experience.

Although I don't practice any religion I am Jewish by heritage. I think the main imprint left on me by Judaism is a sort of dual outlook of cynicism/reverence which often manifests itself in questions/absurdity. To me it feels related to a Zen outlook, but perhaps darker. Every since I was a kid the life lesson, chiefly via Judaism, has been, "Ask Questions! Look Deeper!"

The photographers who most appeal to me are those whose images seem to exemplify this outlook, most often shot by Jews. Friedlander, Winogrand, Erwitt, Frank, etc. Their photographs often thrive on visual ambiguity. They ask questions. They're imperfect. To me they feel natural.

When I look at a classic photo by Weston or A. Adams I don't sense that ambiguity. These are visual recordings meant to describe forms in great detail. They make me feel reverence, but without its counterpart (cynicism), reverence can seem too self-important, too grand. I mean, is there any absurdity in Moon Over Hernandez?

I realize this is a broad generalization and that I've cherry picked cases above to support my argument. But I think there is some underlying truth to it. I welcome other opinions, especially from those who disagree.

Jews are often pioneers in arts and in business, as well as other areas. Pioneering requires thinking for oneself, often meaning going against the mainstream. It is easy to go against the mainstream when you are part of a group that was often forbidden from being part of the mainstream! Naturally it follows that it would be easy to be critical of that mainstream. What better way than street photography to make subtle commentary on mainstream culture? Grabbing moments of the real, editing to strengthen one's observations----a photographer can lead the viewer to a conclusion, and in most cases, the picture can't be argued with.

Doesn't necessarily mean there is a jewish aesthetic---that would be an exclusive generalization. But there are a hell of a lot of good jewish photographers, many of them past and present street photographers. Enough of the pioneers of street photography have been jewish that one could almost conclude that their 'collective' style is a jewish aesthetic, but why go there? There are so many great non-jewish street photographers--you and I both know a bunch of them, and there is nothing jewish about them. Their styles are 100% their own, and yet they are 'classic' at the same time. Why not analyze what they have in common with the jewish photographers, and give the aesthetic a label that crosses cultural borders instead?

I'd stick with the cynical outsider angle myself.

I don't think the label of a "Jewish aesthetic" creates an exclusive generalization. To take a parallel example, just because there is a "Chicago ID" aesthetic or a "Yale MFA" aesthetic doesn't mean that every photographer in those locations follows those styles. Yet those styles are definable.

I think your comment hints at what we are both driving at, which is that there is a certain style of shooting. Call it reality or street or synchronistic or anti-slick or whatever label you want. It does cross ethnic and cultural boundaries, yet there seems to be a strong correlation with Jewish photographers, and maybe with Jewish identity?

Oy! After reading your initial response, Blake, it may not be so meshuga afterall...

Only superficially stated in NYT article but , in my opinion the major point, is not aesthetic but historical causes for abundance of Jewish photographers and distribution as well as style of their work. Jews were prominent in eastern Europe between the wars with the birth and rise of photojournalism. Those lucky enough to escape Naziism largely came to NE USA, NYC area(ie clearly media capital of country at the time) where their journalistic skills and contacts were accepted and possible. A more Leica / photojournalistic approach was therefore more prominent compared to west coast peppers and majestic landscapes.... even different from medium/larger format imagery of FSA westcoasters like Lange. If you want to see the roots of "American Jewish" photography look to Weimar Germany and pre-WW2 Paris.

I suspect a larger % of Jewish photographers/editors were of European /emigrant past(or under their strong antifacist influence, ie the Photo League) that would effect style for reasons stated.

Why is the question phrased with the word
'Was' in it? Why not 'Is'?

Did the Jewish people suddenly forget how to see?

While we're at it... Why so many people of African descent in basketball?

I think the news article used the word "Was" because it referred to a show of mostly older photos.

About the basketball question, the racial distribution is probably just due to random chance.

The idea of a “Jewish aesthetic” is ridiculous as Jews range in orientation from (gross generalizations of course) orthodox right-wingers to neo-con conservatives to reform left-wing liberals or socialists to anarchistic atheists and every religious/cultural/political permutation in-between. The common thread of irony is in much but certainly not all street photographs made by Jews. On the other hand, to ignore the numbers of Jewish photographers and their influence is like ignoring the dominance of black players in basketball. Hard to deny.

Did Edwin Land take pictures? Yup, him too.

The existence of counterexamples isn't enough to negate the question. It's true the argument relies on generalities. That's what makes it interesting, to take a step back and wonder what the big picture is without getting lost in specifics.

To play devil's advocate, let's take an even further step back and ask "is there any Jewish aesthetic, period?", not necessarily tied to photography or even art but as a general sensibility. One could argue that there isn't based on countless counterexamples, orthodox neo-cons on one end vs. anarchist atheists on the other. But if that's true, what does it mean to be Jewish? Is there no common bond or outlook beyond pure accidental heritage? My hunch is that the opposite is true. Judaism is incredibly broad yet it seems to embody some essential strains, and if this is true then it isn't so much of a stretch to postulate a Jewish aesthetic in photography.

Thanks for all the extra names.

I guess all of us non-Jews should just give up hope...
There are only two explanations for this. Either Jews are physically and mentally superior than everyone else OR there is a vast conspiracy that only favors Jews.
Upon reading your blog and putting your posts together, it seems you lament not being discovered for your brilliant work yet. This blog is merely here to keep your name "out there" until the right person finds you and makes you a star.

This particular post is so annoying on many levels.