This photo is almost a year old but I thought of it recently when it topped Lightbox's list of favorite viral photos of 2011. 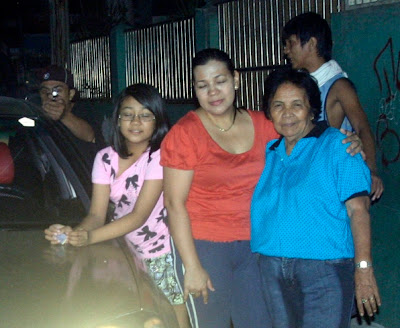 I think it's an amazing picture. Reynaldo Dagsa was photographing his family and inadvertently shot his murderer in the process. Boom. Gotcha.

You never know quite what a camera is going to turn up. It brings to mind the Friedlander quote:

"I only wanted Uncle Vernon standing by his own car (a Hudson) on a clear day. I got him and the car. I also got a bit of Aunt Mary’s laundry and Beau Jack the dog peeing on the fence, and a row of potted tuberous begonias on the porch and 78 trees and a million pebbles in the driveway and more. It's a generous medium, photography"

Very generous. In this case the extraneous material included a gun in the background which was enough of a visual clue to eventually track down Dagsa's killer. Pretty freaky.

I took a similar photo a few months ago. 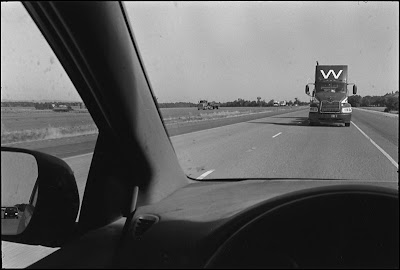 I was driving north on I-5. As usual I had my camera in the car and was shooting the passing fields and other cars and whatnot. In this shot I believe I was looking across the highway to the southbound lane. I didn't notice the truck barreling down on me.

After the accident I don't remember anything. My memory is blank for the next two weeks. In fact don't actually remember taking the photo, but I'm pretty sure I wasn't shooting the truck. I believe I was looking off to my left.

Fortunately my camera somehow survived the wreckage intact. After I left the hospital I was able to salvage the roll, and this photo helped me piece together what had happened. It was also enough evidence to eventually track down the truck driver. The large W proved very identifiable. The driver was convicted of driving on the wrong side of the interstate. Reckless endangerment. Boom. Gotcha.

You never know quite what the camera is going to turn up.
Posted by Blake Andrews at 11:38 AM

So? Really? Or not? Wait. Shouldn't have it been double conviction then?

The posts on this site operate a bit like photographs. They generally bear some relationship to reality but they should not be mistaken for absolute truth.

All I can say is that I'm very glad you're still alive to tell the story and give us perspective.

Can anyone guess the actual story behind the truck picture?

Um..the truck is being towed?

Has no one else ever driven down the interstate and viewed a truck, or multiple trucks, being pulled backwards behind another. Look closer at the pic and you'll see no driver. No Driver? OMG! A ghost truck going down the wrong side of the road!! Really?lol Also check out the shadow showing the cab of the truck pulling this one.

that's crazy man- you freeked us all out!

Nice ... I have a similar photo but it's a prominent wrinkle somewhere on my brain, a self portrait, frozen, I'm floating in the cab of my pickup surrounded by broken glass, my mouth is open, it's a distorted wide angle shot framed perfectly in the reflection of the semi's chrome bumper just before he plowed into my door. I find it strange that my memories, especially the most traumatic, are like single photos. Why not in video?