The end is near

I think this list has some interesting photos, especially this image: 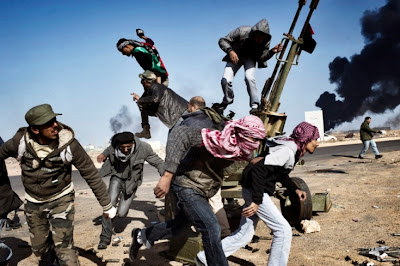 Ras Lanuf, Libya. March 11, 2011, Yuri Kozyrev
Holy crap what a photo. The in-your-face limbs and shapes shooting off in all directions. The smoldering smoke in the background. Pretty rad, man, pretty rad, and definitely streety. It would be a great shot under any circumstances, but the amazing thing is that Yuri Kozyrev saw this while in a war zone with bombs raining down around him.

So is it a street photo or a photojournalism, or both? I think it hits the sweet spot right between. It reminds me of a timely anecdote I recently read by Susan Meiselas:

"Early one morning, near my home and on my way someplace else, I crossed paths with Santa Claus. Now, I don't usually make surrealistic images. Another photogrpapher might have done that. And if I were a street photographer, I might have made a humorous photograph of the Santa Claus surrounded by other people in their work clothes, on the subway or in the street, and left it at that. But I wanted to know who this guy was. Where did he come from? Why was he in my neighborhood?"

I think this very nicely describes the difference between street and photojournalism. Meiselas sees herself as the latter, and the fact that she can very accurately pigeonhole the former makes her stronger as a photojournalist. She knows what she isn't looking for.

I think most documentary images of people fall more easily into one or the other, street or photojournalism, and generally it's tough for an image to excel at both. Kozyrev's shot above is a nice exception. Ironically some of Meiselas' photos also do both. 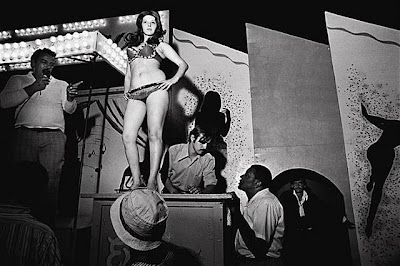 from Carnival Strippers, 1976, Susan Meiselas
That's my main problem with another year-end list, Buzzfeed's 45 Most powerful photos of 2011. 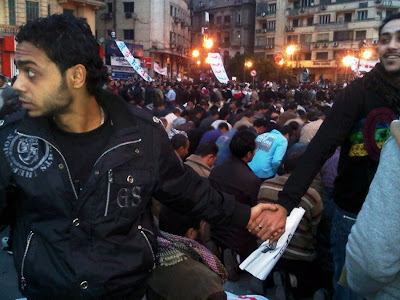 Photo by Nevine Zaki, one of Buzzfeed's Most powerful photos of 2011
The photos are nice but they are entirely photojournalism. Nothing wrong with that per se. We need photos to describe history. We need them to be "powerful". I just don't find them as entertaining. For me a series of photos needs that streety sense or I find myself tuning out. Just me. Personal bias, I know.

I was happy to see Stephanie Gordon's Space Shuttle photo wind up on the Lightbox list. It's an incredible shot, and I love the idea that an iPhoned snapshot through a plane window by an amateur can muscle out contenders with stronger pedigrees. But I think they chose the wrong photo. Gordon shot three images of the scene. Lightbox showcases this one: 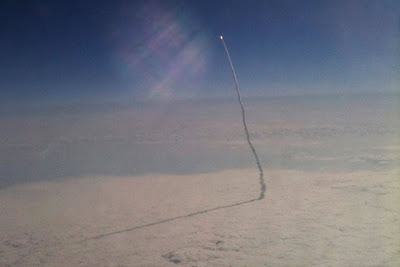 Space Shuttle Endeavor, May 16, 2011, Stephanie Gordon
I would've chosen this one instead: 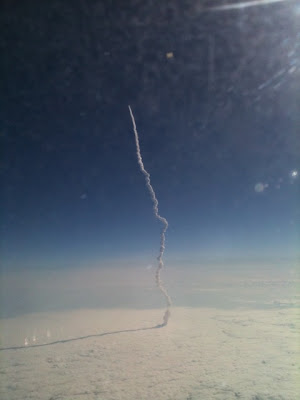 Wayne Tilcock's shot of the UC Davis pepper spray incident is included in the Lightbox list. 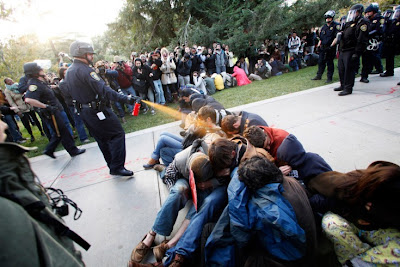 UC Davis, California. November 18, 2011, Wayne Tilcock
I think it's an interesting image, not necessarily because of the photo itself but what it reveals about contemporary photography. To me it's a photo about taking photos. I count at least 13 people with cameras in the photo and I'm guessing that's only a fraction of the number actually there. In fact the Buzzfeed list includes another photo of the same event from virtually the same spot, and indeed it's unclear why Tilcock's image was chosen by Lightbox over that one or any of hundreds of others which presumably exist. I think it works as photojournalism, not so well as a street shot.

Together with the Space Shuttle photo, the multiplicity of these "iconic" images is a very contemporary problem. Many events are shot multiple times by multiple people. Which ones will carry on in history? Who knows? Maybe the best way to ensure a photo will be remembered is to mix in a little street attitude, as in Kozyrev's. But there are no guarantees.

In any case, the Tilcock photo has inspired my own top-ten list. Here are my top ten people taking pictures in a top ten photo, circled in red. 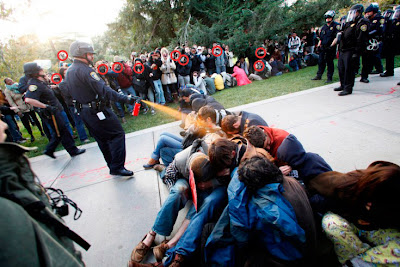 More lists to come in upcoming weeks. I've still got some time until the end...
Posted by Blake Andrews at 10:06 AM

hey B
interesting article
the link is broken

I saw that article (linked from another website). All I could think of when I came to the one with the woman in the flood holding the telephone pole was taking it and photoshopping a cartoon balloon over the woman's head that said "Um, could you put the camera down and give me a hand out of here?"