I caught up with Pete Brook for beers last night at Sam Bond's in Eugene. Pete was on the final leg of his epic Pachinko ball junket across America and back. 90 days, 13,000 miles, and (most amazingly) 65 interviews in the can. Wow! Today is a bit of breather as he lays low on a 5000-mile flight from Portland-to-Amsterdam, then eventually home to Chorley, England for the holidays.

Before last night I'd thought of Pete as a blogger and a human rights activist. Which is a good description but not very complete. Turns out Pete is one of those social glue guys that everyone seems to know. Not only did he visit prison photographers on his journey but he dropped in on much of the online photo community, even the ones not yet incarcerated. The trip has transformed Pete into a sort of Kevin Bacon figure, the nexus, the only one of us online denizens that has actually gone out and met the others in person. We'd barely gotten through beer number one when he was threatening to put me on the phone with person x or person y. I don't like phones so I quashed that. But you get the idea. Pete's social glue. 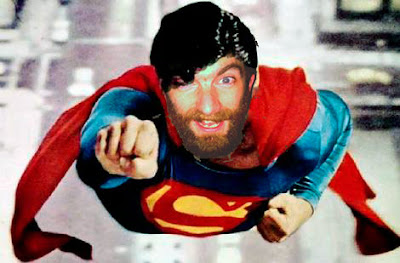 It's a bird, it's a plane, it's...social glue!
And glue can put a roof over your head. Between his online photo network, friends of friends, couchsurfing.org, and the occasional prison cot, Pete couch surfed cross country and back only camping out once. Impressive. If you're reading this now and you're a blogger or have a felony conviction there's a good chance he was recently sleeping nearby. And he has photos on his laptop to prove it. After seeing the inside of all your apartments I have to say I'm jealous. Everyone's studio looks way more hip and spacious than mine. Oh well, I guess it beats a prison cell.

So he's got 65 interviews which exist only in audio form. A beautiful history of prison photography. The next task is to get them transcribed. Supposedly there's a place in India which will do it inexpensively. Maybe the same crew which sent out his recent batch of cards? I told Pete it sounded sketchy but it's up to him.

Once he has some transcribed he will pull dropquotes for the upcoming prison photography book. Then an international exhibition of prison photographs in The Netherlands in February 2012 co-curated by Hester Keisjer (Hester, sorry for the 6 AM drunken Skype). Then, eventually, the prison photography book to end all books, a massive documentary history of the subject using his interviews as source material. Does his life sound like a Pachinko ball to you? Like one big gloriously busy Pachinko ball?

The good news is that upon returning in January from the UK Pete will be my new neighbor since he's decided to settle in Portland for the foreseeable future. So hopefully last night was the first of many tipsy bull sessions. I'm sure I can help with some of those transcriptions after 6 or 7 pints. In the meantime, happy travels, Mr. Brook.
Posted by Blake Andrews at 9:56 AM

It was! I saw them on Skype, holding their exotic and qaintly hospitalesque take-away beer glasses (sans lid), peering into the screen.