The Politics of Time

Was 1960s Ed Ruscha a time traveller sent from the future? You decide.

He anticipated Google Street View. In 1966, Ruscha mounted a camera with motor drive to the roof of his car, drove down Sunset Strip in Los Angeles and systematically photographed every building on both sides of the street in sequence. He published his findings as two facing strips of buildings carefully labeled with addresses for easy navigation.

He anticipated New Topographics. Ruscha's photographic style which came to maturity in the early-60s was a dry deadpan aesthetic cataloguing exteriors in the Western U.S. It wasn't until 1975 that New Topographics crystalized the style in a show, buzzword, and movement that continues to have reverberations in documentary photography today. 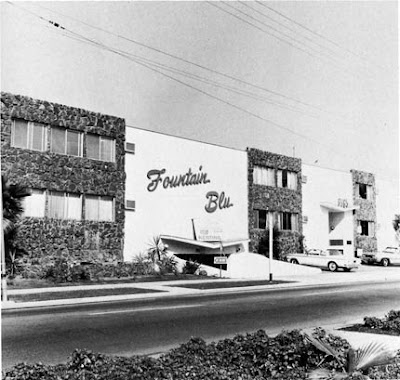 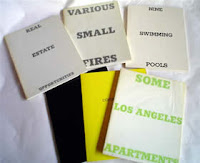 He anticipated today's photobook boom. Between 1962 and 1972 Ruscha self published 15 photography books, a rate of over one per year. This was four decades before Blurb.

He anticipated meta-photography. In 1967, Ruscha hired a professional photographer to shoot his Los Angeles parking lot project. Without picking up a camera, he made another person's photos his own through the power of production, editing, and publication. The examination and appropriation of outside work was explored by Heinecken and Sultan/Mandel, but it wasn't until the current era that it's really taken off with numerous Google Street View edits and other online photo mining. In the future no one will use a camera. We'll simply sift through what's already out there. 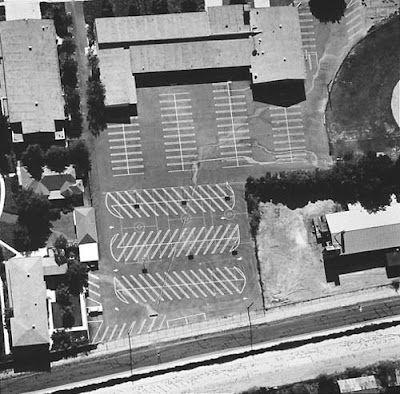 He anticipated Los Angeles. Ruscha moved to LA in 1956. At the time it wasn't exactly the center of the art universe.
Posted by Blake Andrews at 6:20 AM

"In the future no one will use a camera. We'll simply sift through what's already out there."

In the future all online writing will be anonymous and antagonistic.

LOL you got him good! Oh wait... nevermind.

I think it would probably be more accurate to say that he's the first person to gain fame from these projects. I'm sure he's not the first to photograph every building a long a street, make photobooks or hire an aerial photographer. Let's not get carried away with the hero worship.

In the future, whoever is commenting anonymously will reveal his or her name.

Anyway, the post was written in a light spirit. I didn't mean it as hero worship, and some of the claims ("no one will use a camera in the future") are obviously silly.

But I think it's noteworthy how far ahead of the curve Ruscha was in many areas. He engaged in all of these projects which seemed outlandish in the 60s, but which have since come to be accepted as routine.

Isn't that what happens at the end of Neuromancer (or one of those early William Gibson books)? Wasn't there some kind of intelligent machine that eternally recombined the detritus of the universe into Joseph Cornell boxes? I always liked that. And we're getting there.

Thanks for the tip on Ginza Haccho. Was that project shot with a car-mounted camera?

Don't think so since Suzuki is reported to have worked for 18 months on the photographs. For the record I'm a big fan of Ruscha too.

Vincent Laforet chimes in on the future of mechanized photography and the art of sifting:

Ruscha and Baldessari did everything first.