After a long cool spring the weather has finally gotten decent, with temperatures climbing into the lower 70s this week. I took advantage of the sunshine recently to make cyanotypes with Bryan Wolf and his son Jonah.

This was my first time making cyanotypes but Bryan is experienced. Since last winter he's been making loads of them, and he now has the process down to an inexact science. Jonah also has a firm grasp, and has been conducting his own workshops with fellow 3-year olds in the neighborhood. So between the two of them I was in good hands.

Cyanotypes aren't complicated. You coat material (usually watercolor paper) with a special emulsion, place an object (or negative) on it, expose it to light, and eventually the object's shadow forms an image.

In some ways the process is like a photogram or a xerox. There's no lens, no shutter, and limited tonality. It's just reality silhouetted into two dimensions to create notans of negative and positive space. It's the same approach Franz Kline took with paint. Binary. 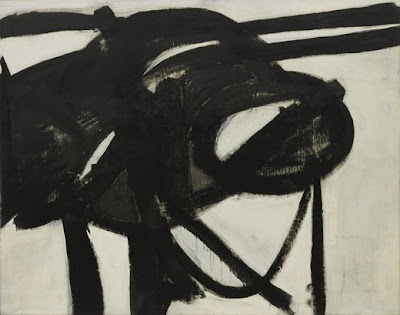 Chief, 1950, Franz Kline
Any object works as subject matter. If you're going for the Kline look, a film container, leaf, and iPod wiring are possibilities. 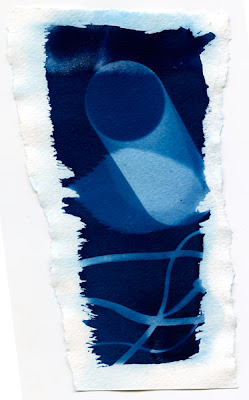 The only caveat is that you shouldn't ingest materials after using them no matter how tasty they might look. For example, this waffle is no longer edible. 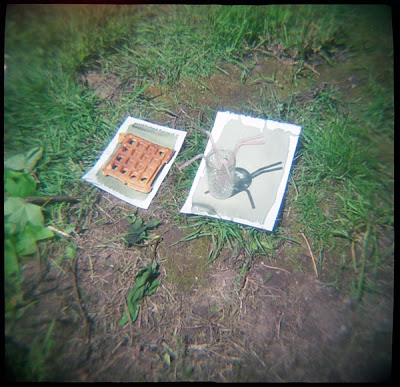 Some people use a UV lamp as a light source but Bryan likes to make cyanotypes in his yard using good old fashioned sunshine. For best effect the exposures need a few solid few minutes of direct sun. Normally this can be a rare event in Oregon but on our day we were fortunate. The sky was sunny 16, bright enough to throw light leaks through all my film. Here's Bryan posing in one. 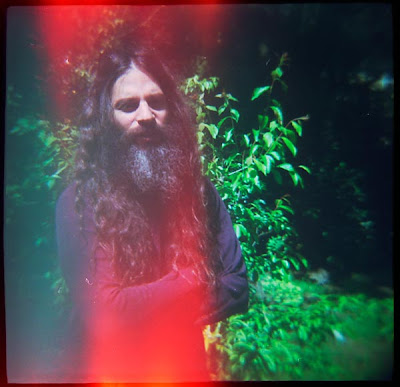 Bryan is glowing red in this photo but it's the green glow of cyanotypes which has captured his imagination. During mid-exposure the cyanotypes briefly turn an electric green/gold hue that is unworldly. Bryan tried to describe the color to me beforehand, but it wasn't until I saw the color for myself that I understood what he was talking about. Its vibrance was downright hallucinatory. On a computer it might look like something like a Modest Mouse album or a Ruscha cover. 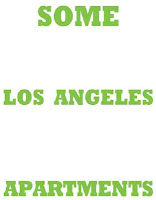 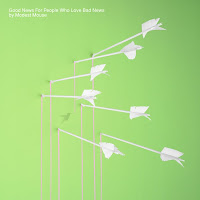 But these graphics are only a rough approximation because it's a hard color to express digitally. Imagine this green printed onto the shell of a golden egg and you'll be close.

But like all hallucinations this one proved ephemeral. With each exposure it lasted just a moment before fading into grey and then the inky blue that gives cyanotypes their name.

I think it's the impermanence of this green/gold that drives Bryan. He's a color connoisseur. He'll spend hours in the darkroom getting the colors just right, and a hue like that is like crack for him. A crack in his golden egg. If he could fix it and put it on the wall he'd be happy but he can't. It's there and gone, and the only way to see it again is to do more cyanotypes. So he and Jonah have been making quite a few lately.

My theory is that Jonah, like all kids, can see that green/gold color in his mind whenever he wants to. He just has to forget one eye, flatten all perspective, and focus far away, the way Joyce did while writing. 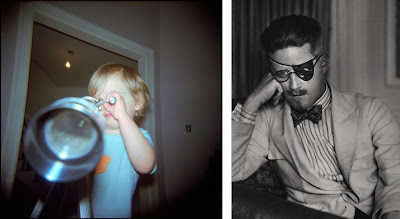 L: Jonah Wolf; R: James Joyce by B. Abbott
After exposing the paper for roughly the duration of one Louvin Brothers song (The Minutemen can work as timing too, but James Brown songs usually result in overexposure unless it's a very overcast day), the cyanotypes were rinsed in a tub where they began to show their true blue nature. Bryan's waffle print can be seen here in the upper part of the tub. 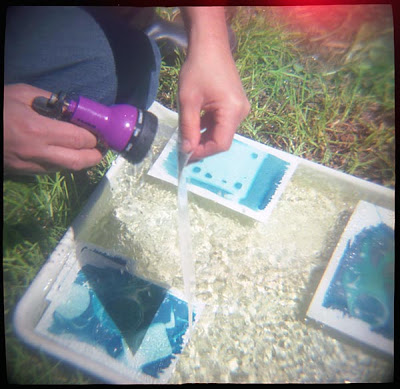 The water leaches away any excess color, stops development, and fixes the image somewhat permanently. I say "somewhat"

because cyanotypes have been known to change over time. Bryan thinks the tones gradually darken. Or maybe over a long time they'll fade like an old book, in which case cyanotypes can be restored by putting them in a dark environment where the color blooms back to life. Books turn to yellow, but cyanotypes heal. Weird.

After rinsing, we set the prints on a drying rack. On our bright warm day, they were dry within an hour and ready for perusal.

The shadows of grass blades over the edge of the paper created interesting effects. Here's a cassette tape I exposed, with Bryan's yard creeping into the bottom of the frame to blend with the emulsion strokes. 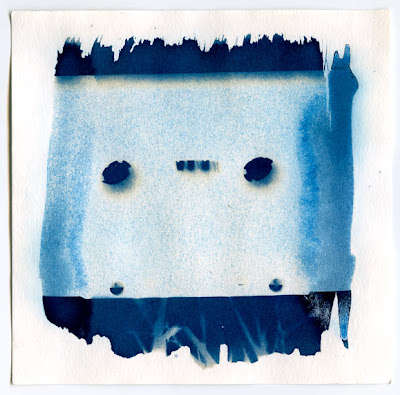 Here's an old 35 mm developing reel. At least they're still good for something. 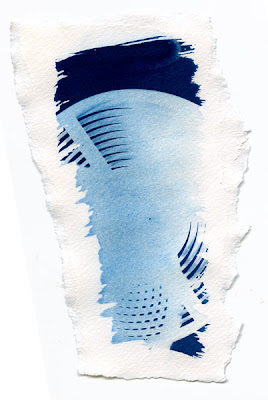 I'd like to show more examples. Bryan was supposed to email some others but he's been too busy making cyanotypes lately so he hasn't had time.

I wish he would because the real ringer is young Jonah, whose compositions have the simple confidence that kid drawings often do. As in, of course that's how it should look. How else could it look? It's the feeling you get from a Kline painting or an Irving Penn photo. Easy. Not easy. Binary. 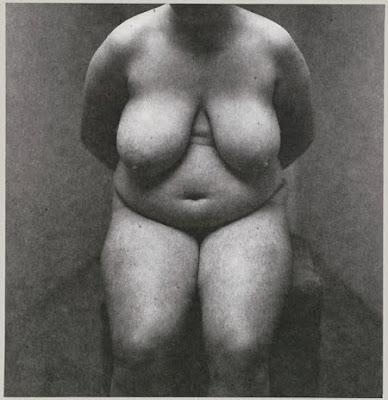 Nude #1, 1949-50, Irving Penn
Take this Penn nude for example. How else could it look? Mightier than the sword?

As far as I know Irving Penn never made cyanotypes but he made plenty of platinum and palladium prints during his life which rely on a somewhat similar process. For subject matter he preferred negatives to waffles. Sometimes he used aluminum sheets as backing material which gave the final prints a metallic glow like a golden egg.
Posted by Blake Andrews at 7:31 AM

"Here's an old 35 mm developing reel. At least they're still good for something."

This statement disturbs me. I still use mine for the purpose for which they were intended.

Don't get me wrong. I still use film reels every day for developing. But I think in the general scheme of things they are viewed as ancient artifacts. Using them for photograms is just as likely as for their intended use.