In the backrooms of the photography world there had long been a simmering debate about Garry Winogrand. Some argued that he kept at least one hand on his camera at all times while photographing. Others argued just as vociferously that there was a brief moment in his stride during which both hands were out of camera contact.

Because Winogrand moved so quickly, neither position could be proven definitively. No one had ever seen him not touching his camera, but that didn't preclude its possibility.

Debate was heated. Finally Leland Hurley, a business tycoon and antique camera collector, decided to settle the issue once and for all. He offered $25,000 to photographer Edward Boon if he could photograph Winogrand in a way that offered proof for either side of the argument.

Boon's method was ingenious. He set up a series of twenty-four cameras near Winogrand as he was photographing. The cameras were laid out in such a way that each time Winogrand moved he tripped a string connected to camera shutters in sequence. 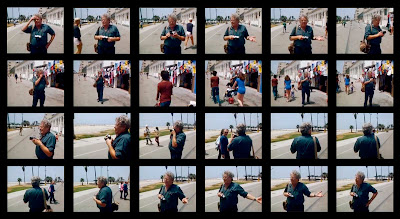 Taken together the resulting images clearly show Winogrand removing both hands from his camera at one brief moment in his stride. Finally the matter was settled. Boon collected his money from Hurley, and his place in history was secure.
Posted by Blake Andrews at 7:41 AM

Boon was a strange one. His early work actually consisted of slices of processed American cheese slathered in photographic emulsion. Using a 4x5 camera and portable refrigeration unit, he created some of his most memorable compositions. Most of which are still on display in the dairy wing of the Museum of Modern Art. He later experimented with Swiss and Gouda but was never able to capture the intensity and beauty of his earlier work.
The Winogrand series you mention in this article was actually shot on thin slices of baked ham purchased at Hazel's Delicatessen in downtown LA.
Most critics ridiculed Boon for using non-kosher deli meats in his work and he has since been relegated to the back corner of photographic history. In 1992 Boon accidentally killed himself while experimenting with Cheese Whiz.

What Boon also discovered with his routine is that Winogrand actually became invisible every 24th of a second or so (as shown in the 9th frame of the series here).

Boon actually died in a car accident in 1985.

Even if Winogrand was visible most of the time, he always acted invisibly.