Time to check in with my photo-related New Year's resolutions from last year. I had three:

1. Get bored with the Diana so I can move on finally. 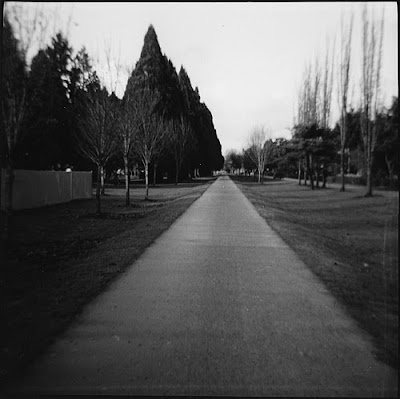 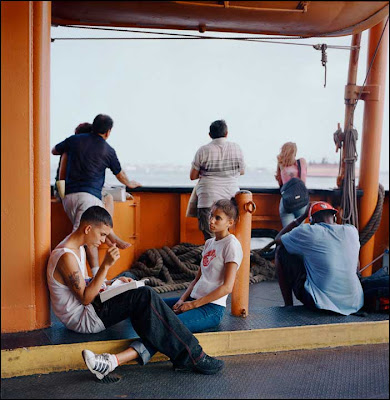 This Mike Peters photograph was one of my favorite swaps in 2009
3. Photograph for at least twice the hours spent watching TV.

As a rough guess, a roll of 35mm film lasts me about an hour, a roll of 120 about 45 minutes, and it takes roughly 2 hours to get through a roll of 220. Last year I shot 560 rolls of 35mm, 105 rolls of 120, and 110 rolls of 220 for a total of 858 hours shooting. I shot 2700 digital snapshots but those were quick hitters, probably around one every 12 seconds, which brings the total hours to 867. I often shoot multiple cameras concurrently so I should probably factor that in. I'm going to guess 10% shrinkage which leaves roughly 780 hours of shooting.

Calculating TV time also requires some guesstimation. I figure I watched one sporting event (compressed via commercial-free DVR) and two films per week for a total of 5 hours per week. On top of that I'll throw in 2 hours per week vegetating in front of miscellaneous crap. 7 hours per week adds up to 364 hours per year watching TV.

780 is more than double 364. Resolution successful.

Here are my photo-related resolutions for 2010:

2. Photograph for at least twice the hours spent blogging.

What is a Diana?

Looking forward to the B/W book -

Thanks, still loving your photo too!

The problem with you and the Diana is that you take interesting photos that happen to be taken with the Diana, as opposed to those who use Diana's to take Diana photos that look like all other Diana photos.

Here is some Diana info:

It's main potential pitfall, as with many cameras, is the temptation toward the picturesque.

Interesting to compare your swap with HCB Simiane-la Rotonde,1969.....

And I thought I was busy with 68 contact sheets and nothing digital last year!

I enjoyed reading this.
Looking forward to the book as well.

did you pick out a camera to master yet?

I'm in the process of learning two new cameras, the Holga and the Lomo 360. I'm still a long way from mastery but gradually refining the process.