I had a brief existential crisis this week while watching the latest Simpsons episode. In a theme park parking lot, Marge takes a bunch of digital snapshots. Later she looks through them and can't understand why she took any of them. They're all random and off-moment, but not in an artsy way. A bird eating potato chips, my feet walking, the park rules in Spanish... While she's trying to figure out which ones to save she accidentally deletes them all. She shrugs and moves on. 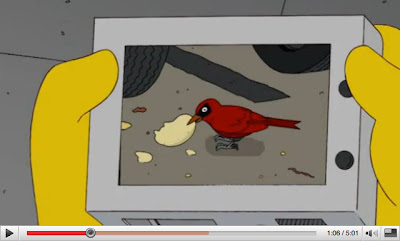 A bird eating potato chips, from Thursdays With Abie
The Simpsons January 3, 2010
The whole thing takes about 25 seconds and it bears no relevance to the rest of the episode (The clip can be seen here between around :55 and 1:20). But I thought it was an insightful and sort of existential glance at the nature of photography. The world seems full of visual promise. You rush off to capture it. The camera performs its task. You look at the photos later. It's hard to connect to them. You delete them, or maybe you don't. The world moves on.

Sometimes photography is like that. Hopefully most of the time it isn't, but sometimes it just is.
Posted by Blake Andrews at 7:43 AM

That is so true

Love the post. I wish the video was still available on YouTube as I would have loved to watch it.

I have a photographer friend who I would say is semi-professional. He lives to catalog Vancouver through his camera. He's merely recording (non)moments and time, but not in any organized way. And, as you say, it's not artistic. I, of course, have my own snaps that fall into this category. Usually I'm following Winogrand's philosiphy about curiosity of how the world looks from my camera's perspective. Aside from that, I can't for the life of me understand why this behavior is so compelling for people. You see it all the time on Flickr whether people are documenting a city, cars, and, yes, the popular neon signage. I just don't get it.