Portland photographer Christopher Rauschenberg has just added new photos to his website from his Paris flea market series shot in Marché aux Puces at Saint-Ouen. Chris has a way of shooting that's just on the border of banal. At first glance his images look like uncontrolled snapshots. You imagine that if Google Streetview could somehow shoot the inside of a flea market they might look like this. And in fact many of them were shot from the hip out of necessity since photography is forbidden in the flea market.

So how is it that after looking at them for a while, they seem precise and orderly, and that taken as a whole they reflect Rauschenberg's inimitable visual voice? How do you carefully plan an accident? I guess those are questions between Chris and his muse. 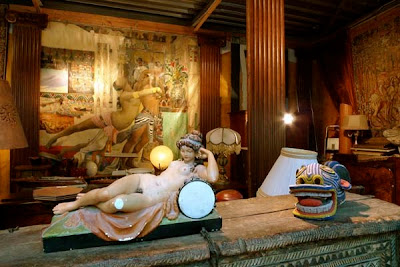 Marché aux Puces at Saint-Ouen, November 2008, Christopher Rauschenberg
You can see the photographs in person at Elizabeth Leach Gallery in Portland through the end of January, and wonder how such big luminous prints came out of a tiny pocket camera.

Speaking of Portland shows, the highlight of the month is at Froelick Gallery. As part of a broader multimedia show called Interiors, Froelick has devoted a whole wall to various black and white photographs of interiors hung in patchwork salon style. Some of the photographs are by famous artists. Some are by locals. Some are anonymous. They're mixed all over the wall with no labels. The only way to tell which is by whom is to check the small cheatsheet diagram in the corner.

I love this effect. I think every gallery should do it. Screw labels, screw fame, screw prices, screw any supporting info that leads to pre-judgment. Just put the photos up and force folks to look at them with no supporting context, so that the only basis for any judgement is the photo itself. The image is king and reputation is meaningless, at least for this month. Love it. Thanks Froelick.
Posted by Blake Andrews at 8:33 AM

the flea market photos remind me of Velazquez.....sumptuous baroque heaping art on art.

the Froelick exhibition sounds fabulous in that the viewer is not informed by name and fame. I believe that the modernist view that a work of art can stand alone is questionable, given cultural and economic variables...the "frame" of a work of art doesn't exclude what is outside the frame.... obvious and redundant. The artists' context and intention are a consideration for understanding the work. imo.

I agree that it's probably impossible to completely understand any artwork without putting into some context. It helps to know about the artist, their project, the historical framework, etc.

I think the problem arises when all this extra information supplants the viewer's internal reaction. Instead of looking at a piece of work and responding honestly, most gallery viewers rely on outside information as the basis of judgment. They look at name, price, cv, representation, etc. All of these things are helpful to know but far less important than the basic issue, which is "What do you think of this image? How do you respond to it?"

By separating images from their context the Froelick show encourages pure reaction. I think that's a good thing.