The Whirlpool WH-139 hand mixer needs no introduction. It has always been a classic and, like the male organ whose shape it so subtly evokes, it has remained virtually unchanged since its inception. It sits like a coiled jaguar on the kitchen counter mimicking the form of its pioneering predecessor the simple flat stick, yet with a handle that turns. Need I remind the reader that the seasons turn also, or that things which turn are often labeled revolutionary?

Alas, many hand mixers share the phallic form. To catapult above its peers required something else, and here is where Whirlpool broke pattern with the past and launched like a coiled jaguar into the future, with the infamous white handle™ which has become the tool's signature style. With the white handle™ a cook could tap into the absolute blank oblivion with one hand while remaining grounded in the terrestrial with the other. With the arrival of the WH-139, finally a mixer had joined heaven and earth. 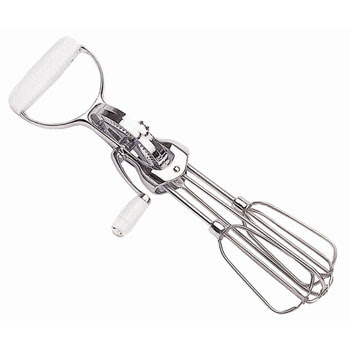 The WH-139 rests before pouncing, like a coiled jaguar
This synthesis proved irresistible to collectors. The first edition in 1958 was limited to a brief run of 1000 copies, all of which were quickly acquired. For the next few decades, the WH-139 remained an underground phenomenon. Serious kitchen gadget connoisseurs knew about it but not many had direct access. This was before today's image-saturated era. Few cooks could even picture the thing in their minds. Rumors flew. The WH-139 became legendary.

The simple flat stick was an early progenitor of the hand mixer. They were often sold in editions of 100, as in this package from 1976. Unfortunately this led to oversupply which has diminished their collectibility as investments.
Gradually the din reached a fever pitch. Hoping to capitalize on the opportunity, Whirlpool responded in 1989 by publishing a second edition of 4000 copies, distinguished from the first edition by slightly textured grip on both handles and tipped in serial number under the wheel carriage. These sold out in less than a week, and again the situation for common collectors was bleak. Perhaps by design, there was simply not enough supply to accommodate everyone.

The second edition in 1989 roughly coincided with the beginning of a renaissance in kitchen gadgetry which has lasted until the present, with particular energy devoted to the study of mixers. This surge in interest has generated a slew of catalogs, commentary, blogs, websites, and related material, the most notable of which have been 2003's The Book of 101 Mixers, and the two volume History of Hand Mixers by Bogey and Weevil published in 2006 and 2008, respectively.

Inclusion in the second Bogey and Weevil solidified WH-139's place in history and sparked a fresh round of speculative interest. Whirlpool responded in 2009 with a third edition, this time two tiered. To satisfy common household demand, Whirpool produced a large edition of 200,000 copies. For connoisseurs and high end collectors, a smaller run of 500 mixers was produced simultaneously. The limited edition featured gold plated beaters and body inset with original mixing stick signed by Weston Hubble (for whom the WH-139 was named; 139 refers to the number of sprocket notches on the original wheel casing). The asking price was $7,500. Despite the cost there was strong interest and the limited third edition sold out in less than two weeks. They can be found today on eBay but the cost is generally above $25,000.

An original mixing stick signed by Weston Hubble
Fortunately for household users, the basic third edition is in plentiful supply. I bought two for myself, one to use in the kitchen and one which I keep boxed up in the original packaging. I have a hunch it may be worth something someday after the third edition sells through, which I'm fairly certain it will. 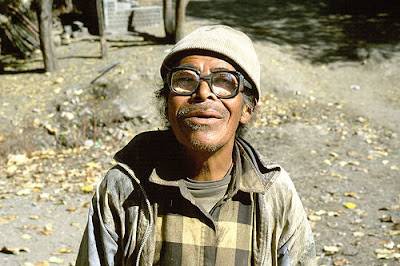 Weston Hubble, 1987, photographer unknown
Not that I am not a speculator. I am only interested in kitchen gadgets for their functionality and I would never encourage collecting them for any other reason. I purchased my second one just as a sort of gadget insurance, in case the first one breaks or gets lost. But so long as its in the package I intend to protect the value. In fact I plan to have the box signed by Weston Hubble at the Paris Mixer Expo this spring. Hubble is in his eighties now, and who knows how many years he has left? A signature like that is guaranteed to become a limited edition when he dies.
Posted by Blake Andrews at 9:57 AM