(Due to certain financial arrangements not worth going into, I'm obliged to devote occasional blog posts to reviewing mixers. This post marks the first in the review series.)

Much of the best in mixer design of the past generation has concerned itself with giving permanent form to the ephemeral. This concern has expressed itself not only in the analysis of that swarming flux of movement within the whippers and the beaters, but also in the approach to subjects that the casual observer might think static. For example, the frame of the mixer does not move in the conventional sense, but it changes constantly in other ways, most notable through the agency of spilled batter. 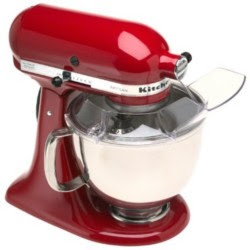 KitchenAid RRK150 325 Watts Stand Mixer
Within the previous decade, manufacturers —most especially KitchenAid and Kenmore— have begun consciously to explore the expressive potential of that spilled batter detail: the part that would represent the whole. This approach has produced a new breadth and simplicity in mixer design, and equally important, a new poetic ellipsis in cooking's approach to significant content. This new intuition allows chefs to use the mixer directly and realistically, and at the same time abandon the kind of leisurely, discursive literalness that has characterized most earlier straight mixing.

From a typical 20th Century mixing apparatus, one might have built a rough imitation of the original —and in fact thousands of rough imitations were built largely on the basis of outmoded countertop tools. The Kitchen Aid RRK150, on the other hand, would not be of much use to an appliance plagiarist, but it conveys a tangible and immediate sense of the space and scale and drama of the great construction. It deals not with the concept of mixing styles, but with the adventure of cooking grandly —and with the confidence of heroism, eternity, and time.
Posted by Blake Andrews at 7:00 AM

??? I'd like to know why exactly. Do you owe part of your life to the blender mob?

Without doubt the best kitchen appliance review I have ever read. What will the next one be like - Kerouac? Chaucer? a Futurist manifesto?

In writing this blog as well as in my photography, my main motivation is the generation and exploration of "???" moments. And if I can be of service to mixer consumers while doing that, well that's just the icing on the cake.

I opt for the independent group.