I've had fun looking over the recent Photo-Eye Best Books of 2010 list. A lot of promising stuff in there.

Unfortunately it's hard for me to judge these books in person because my local bookstores don't carry them. The closest store with a reasonably good selection —Powell's in Portland, the world's largest bookstore— is pretty dismal by Photo-Eye standards. By my rough count it currently has 8 books in stock out of 190 on Photo-Eye's list.

A horrible ratio, but I'm guessing most bookstores outside of New York or LA aren't much better. Let's face it, these are obscure titles. I'd speculate that most people reading the Photo-Eye list have seen less than a quarter of these books in person. 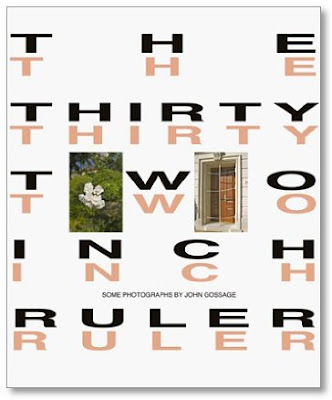 The latest from John Gossage. Looks great. Haven't seen it.
For those of us who don't live in a major city or make the circuit of European book fairs there are a few options. For some books Photo-Eye listings show a Booktease, which is sort of the book equivalent of 30-second song preview in iTunes. Sometimes this is sufficient and I can tell with Booktease whether or not I'll like the book. But many listings don't include Booktease, and even when they do it's a bit of a tease. It can be hard to judge.

Blurb goes further, previewing the entire book online. That's great but of course most books are not Blurb books.

The best previews are sites like Claxton Projects or even the occasional You Tube link which show videos of books being thumbed through. I think these are great. They give a real sense of the book, of its size and feel. But unfortunately only a small selection of books make it to video form. 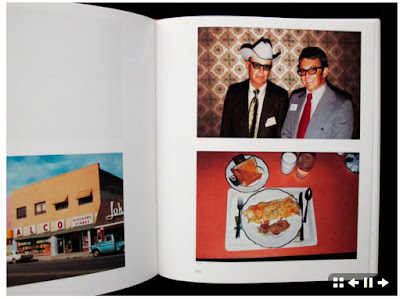 American Surfaces reviewed by Claxton Projects
So for the most part we're on our own. We may be living in the golden age of photobooks but in many ways it's just like the old days: the only way to see it is to order it. In Winogrand's terms, we need to buy a book to see how it looks bought. But that gets expensive, especially when you buy things you wind up not liking.

Short of purchase, there's always browsing. Powell's may not stock many obscure titles but they do get a steady flow of more popular new work.

Every few weeks I make a thorough circuit of their photo section. I keep a running list of interesting titles. Sometimes I add books to the list that I hear about online or through the grapevine. In December (Triple whammy: Hannukah, Christmas, Birthday) I narrow it to a wishlist of about 8 or 10 books. I hand it to Tab and she distributes it to the proper channels. From this list I usually get four or five books as gifts.

Here's how I made out this year.

Paul McDonough, New York Photographs 1968-78 McDonough is the real deal, a nuts and bolts witty b/w street shooter. He doesn't hit you over head with his photos like Cartier-Bresson. The style is a little quieter, somewhere between Papageorge and Winogrand. A must have for street connoisseurs.

(PE) New Topographics, Brit Salveson This is the Velvet Underground of photo shows, the one that sparked a thousand others. I'd seen many of the photos before but still the book is worth having. It includes every photo in the show, every page of the original catalog, and a fantastic essay by Salveson.

(PE) Larry Sultan, Katherine Avenue I don't own any other Sultan books (except Evidence) so this seemed like a good way to catch up on him all at once. It includes highlights from The Valley and Pictures from Home, plus a selection from his most recent project shooting immigrant communities in SoCal. Great photos, great production. The guy was a stud.

Martin Parr, The Last Resort An alltime classic. Didn't get it. Phooey.

Danny Lyon, Memories of Myself A collection of outtakes and B-sides from the past 40 years. As with Sultan, I don't own any other Lyon books so this one seemed like a way to cover a lot of ground in one shot. I like Lyon's writing even more than his photos. I'm still plugging through this. It's dense with material.

(PE) Alec Soth, From Here to There Looks great from what I haven't seen but it wasn't in the cards this year.

(PE) Oraien Catledge, Photographs Catledge's first and only book. The moment I saw this I knew I would own it eventually. It really hooked me. Catledge's style reminds me a bit of Mark Steinmetz. He is a master chronicler of the Southern aesthetic. Very strong portraits which have a spontaneous, honest, and open feel. Great duotone printing.

Bernard Plossu, So Long So long, wishlist. This one didn't come through for me.

I feel lucky because here in the Boston area there are many, many bookstores, some of them well garnished with photobook. And I don't speak only about large bookstores, such as Borders. Many good opportunities for second hand acquisition too (check out the indoors shells of Brattle Bookshop if you come downtown). I could spend a fortune in that but instead I am for just few bucks from time to time, and instead I spend some time inside to browse the books. The nearest bookstore from my home (at Coolidge Corner, Brookline MA) is great. It is a very generalist bookstore with a small shell dedicated to photography that you could think is not thrilling. But their choice is just great, mixing old and classic stuffs (unfortunately all in recent re-print and sold new) with new ones . They have classics such as Eggleston Guide, New Topographics, Uncommon Places... They have a couple of Nan Goldin and Eugene Richards books (both are born in the Boston area). They also have Gossage, Soth, The Meyerowitz book about Cap Cod... not to mention they have "Street Photography Now" (which is well distributed here).

Last time I went there I browsed Larry Sultan's Katherine Avenue and it looked to me as a breathtaking photo-book, though very depressing for a photographer wannabee ego.

Sounds like you have some good options in Boston.

I didn't mean to give the impression Powell's doesn't have a large selection of photobooks. You can count on finding the mainstream stuff there like Eggleston, Shore, Soth, etc. But most books on the Photo-Eye list are limited run, offbrand titles which Powell's doesn't have.

There is an another place in Portland, Ampersand Vintage, which has a very good selection of small press stuff but the store is tiny.

Oh well. I'll probably wind up ordering all the books I didn't receive as gifts eventually, or they'll filter down to next year's list.

Thanks for pointing out Paul McDonough, I wasn't aware of him. It looks like this is the next book I need to order. In case you didn't know you can preview Ohio (wonderful book!) as well as all the other Steidl titles at www.steidlville.com.

I had to stop keeping a book list because it was just getting too long and unrealistic. It's too bad since there are so many great books out there.

I really hope you get The Last Resort as soon as possible. IMO it is Parr's best book, along with The Cost of Living. I still marvel at all of the details whenever I look at it. Ian Walker's essay is also quite good.

This discussion reminds me of the need for theNetflix of Photobooks. Our urban library systems can fill the gap to some degree and carry a good number of the "best of" photobooks from each year, just as they do novels, cookbooks and self-help books. The challenge is getting them to realize what is on that list, why the photobook belongs in libraries, and that there is an audience for it.

I live in Kentucky. In our bookstores we'll get the occasional Leibovitz along with 30 copies of Tuscany: Inside the Light by Joel Meyerowitz (don't ask me why).

What I do, if I'm really interested, is order the book from amazon.com and return it if I don't care for it. I did this recently for a Boris Smelov tome that previewed as excellent but was less so upon perusal.

it may be easy for me to say so because I live in Paris, and I'm able to find many great books at bookstores... but I also order many on the internet.

I don't think the photoeye list would be interesting if the aim is to highlight only best sellers and everywhere-to-find books.

When they proposed me to share my best books of the year I was very happy, and to be honest if they asked me it's because they were interested in my independent choices.

If you have books you don't like (any more) just swap them ! http://photobookswap.tumblr.com/

you can also check my collection, and get a feeling of some books here : http://oneyearofbooks.tumblr.com/

Another way to get a look at hard to find books, although they may be older, is the Interlibrary Loans system. I had heard that the US is quite good and usually it's free, or there may be a nominal fee. In Canada I was able to borrow a first run edition of The Pond by John Gossage. Although they have reissued it recently, this book is so expensive to buy used that I would never have had a chance to look through it otherwise.

Thanks for all the tips. I actually have a library nearby at the U of Oregon that is very good, so that helps. They have stuff like The Pond along with many other hard to find titles. But they tend to be slow getting new books. I doubt they would have anything on the Photo-Eye list until next year.

Laurence, I have been checking in occasionally on your year of books blog. What happens when your year ends?

I have decided to keep it on for a second year, at least ! And the 2nd year just started.
I love books and i love doing this.

Blake, I think interlibrary loans, at a public library, may source the entire country, so while the university's acquisitions may be slow there's sure to be others more up to date - although the waiting time on a popular book might be ridiculously long.

What would be great is if the publishers themselves got in the habit of providing detailed previews.

I feel your frustration Blake and hope that the Indie Photobook Library can begin to fill this gap as one collection of these "obscure" but important titles. We are working on video flipthroughs of books in our collection and posting them on Vimeo. The iPL is based in the DC-area but selections from our permanent collection will be on display at photolucida in April in Portland (at Review Santa Fe in July and at the PRC Sept-Nov). I hope you will come up and visit us!

Thanks, Larissa. I will keep an eye on that site. It's interesting to compare the legal situation of book-flipping videos with book scans. I think videos are wide open, because no one would confuse that for the book. But put the exact same material online as individual scans and you're in a grey area legally. Maybe because people confuse a scan or photo with reality, while a moving video picture isn't held to that standard? Who knows.

@Blake - Each iPL video is done with the permission of the photographer.