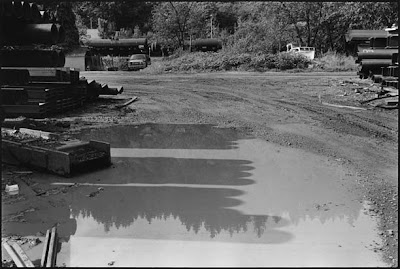 It's been warm and clear the past few days and I've spent some time shooting the Eugene Grid Project. This month's square, F10, is on the outskirts of Springfield. It's rural land that's slowly being converted into residential development, except at the very southern edge which is parkland along the Middle Fork of the Willamette. I took the dog out on an exploratory trip the other day and I couldn't stop. The trail just kept going along the shore. The river was brown and churning with snowmelt. Finally after a few miles I figured I was out of F10 but I needed an excuse to turn around. I couldn't just stop without a reason. So I asked the next person who came along if the trail had an end and he said yeah, Doris Ranch. Another 4 miles probably. So that became my excuse and I turned back. I'd shot maybe 6 photos in an hour, but I'd seen an hour of new territory. 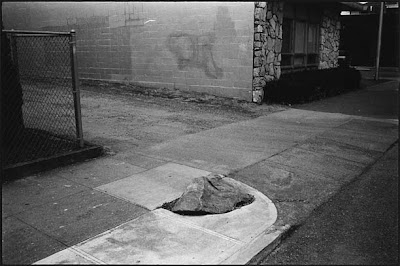 That sums up my photographic strategy lately, and maybe forever. If I'm standing on a corner and one direction is familiar and the other is new I will always take the unexplored route, even if it doesn't seem to have as much photographic potential. The Robert Frost approach to photography? At its core, I think exploration is what the grid project is really about. Photography is integral but it's a byproduct thrown off from the core.

A few days later I came back for the northern half of F10. It's developed in an ugly way. The trees are young and scrawny. The houses are cheap and new and bland. The neighborhood doesn't feel worn in or well loved, like the residents are just biding their time before bolting to some other generic housing plot. Every few blocks I saw a sign like this: 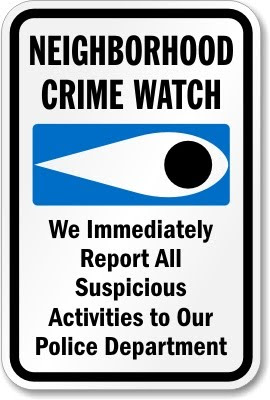 Who knows what counts as suspicious activity? Maybe photographing, maybe not. I've seen these signs occasionally in other areas but they were particularly thick here. I don't know if it was in response to actual crime or just paranoia, but I have noticed a trend. The blander and quieter the street, the more common these Neighborhood Watch signs are. In a busy Jane Jacobs neighborhood with kids playing on the sidewalk and people eating on the front deck, they're rare. It's the dead zones with no people in them that rely on signs.

Even though there were no people around, it took a half hour in this neighborhood to warm up photographically. It's always that way. Taking those first photos is sort of like coming late to a party. I'm conscious of my newness. I'm an outsider and there's no reason for me to be there studying the houses. After I've walked and shot a while my shutter loosens up and I find myself being nosier, poking into truckbeds and bushes, engaging in "suspicious activity". It's like this in other situations too, busy cities, train stations, malls, whatever. The 100th photo is always easier to take than the first. It's the old saw, a journey of a thousand steps begins with one. I know it's cliché but it's true. 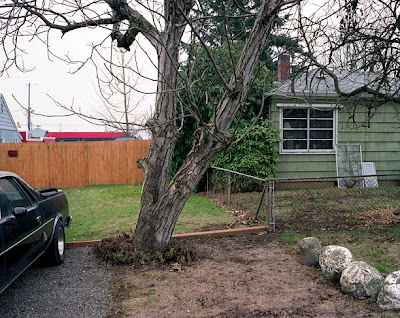 After F10, the next grid is the downtown Eugene grid, E5. Coincidentally, Portland Grid Project will be shooting downtown Portland (L8) during the same time period. It's going to be a dense few months and I'm excited. No longer will I have to choose: should I drive out to bumfuck to shoot the grid or shoot downtown? For a few months there's only one choice. The grid projects will merge with street photography, and in both cities at once.

I started on L8 last week. Instead of using my normal 35 mm camera I've decided to mix it up and shoot color Holga, which I seem to be doing a lot lately. The flash works well in dim winter light. Sometimes instead of flash I just push the shutter a few times to expose enough.

When I bought the camera it came with foam padding to keep the roll tight inside the body but the foam fell out after a few weeks. I can't find a good substitute so what I do now is carry around a changing bag. I know the roll will be loose so I unload it in the changing bag, tighten it up by hand, stick the roll closed, then remove from the bag. 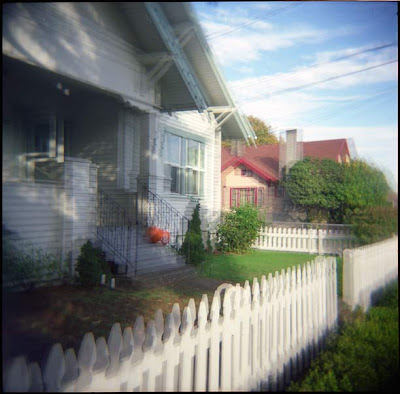 The whole process takes about five minutes and it's a bit of a pain but it's worth it and here's why. When I'm sitting down with the bag on my lap tightening the roll, it's a very odd sight. It looks like I have some sort of covering over my private area and I'm carefully manipulating something in that area. It could easily give the wrong impression. Last week in L8, every time I finished a roll I made sure I was in a busy spot, and I watched people walk by as I changed rolls inside the bag on my lap. Talk about engaging in suspicious activity! Not one person looked me in the eye. I know they saw me. I was right there. But I wasn't someone to mess with.

This other grid task this winter has been editing images for the latest revision of the website. This is fun but daunting. I keep the photos in small boxes. It takes about an hour to sort through each grid. It's the first time I've seen the photos in years and sometimes it's like visiting an old friend. Oh yeah, I remember that one! For the website they need to be winnowed to a max of 10 per grid, a very difficult task sometimes. It brings up all sorts of issues about what the photos should show. Should they represent the city, or document a time period, or just be personal favorites ignoring any grid connection? When in doubt I go with the Robert Frost rule. 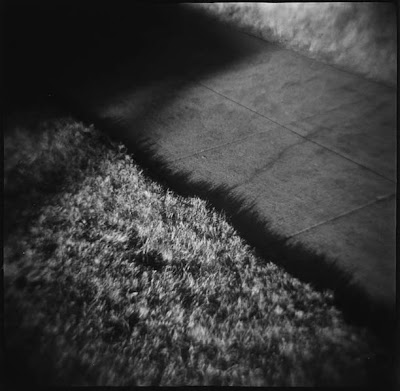 Spending time in front of a screen editing images seems to be the way of photography nowadays. For my last few shows I haven't even made prints. I've just sent someone a file. It's Photoshop this, Facebook that, Flickr the other thing. Here I am this morning, typing this. Sometimes it's hard to remember the joy of daily practice, just walking by a river on a nice day with a camera.
Posted by Blake Andrews at 7:36 PM

Be suspicious, have fun!

Next time you change your film, try doing it near an elementary school or playground. I have a feeling you'll get some eye contact...and much more.

Like the color shot of the green house and car.

I shot with Holga's for a few years and I found that if you just squeeze the left side of the camera when advancing the film it puts on enough tension to produce a tight take up roll. But you need to find the sweet spot and use as little pressure as possible. I never had any trouble with scratches or stretch marks either.

BLAKE ANDREWS SEATTLE BEUTIFUL CITY I HOPE VISIT DAY SOON> THANK YOU FOR GOOD PHOTOGRAF OF CENTER DOWNTOWN. IS GOOD NO? DREW HOLGA IS PRETTY LADY THAT YOU GENTLE TOUCH NOT "PUSH'IF YOU SCRATCH HER I SEND COMRAD TO YOR HOUSE TO SCRATCH YOUR EYES OUT!!!!! IENJOY BLOG THANK YOU