Christian Reister: What Was He Thinking?

Christian Reister is a photographer based in Berlin. More of his work can be seen here and here. 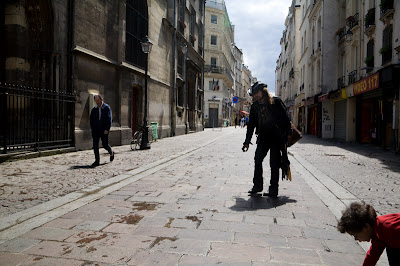 Paris 2008
"This is a hipshot that happened right out of the blue, one of those images that happen so fast that you really can't think a lot while taking it. A moment before I took this picture I was photographing something else on the right side of the street. I had just turned to walk on when this scene appeared right in front of me. I clicked 2 times, my camera in hand without looking through the viewfinder. I noticed the child jumping into the scene but wasn't aware that it would be perfectly placed on the right bottom corner of the photograph. Those are the moments I love photography. An intuitional reaction and luck on your side. Those moments are very rare but in a way they are the thrill of it all." 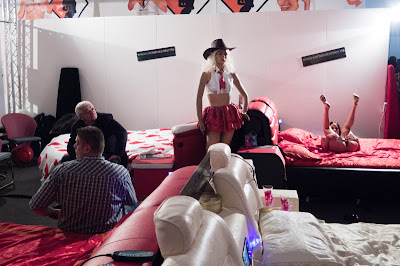 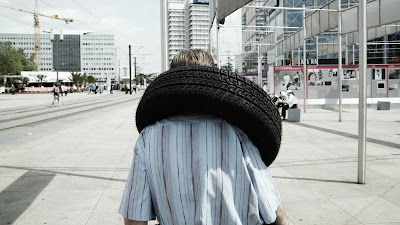 Berlin 2010
"This is one of the very last pictures I took for my book ALEX in the summer of 2010. I saw this guy from afar walking into the place with one tire around his neck and another one in his hands. Naturally I was attracted to this man and photographed him several times from the front and from the side as he walked by. The best shot was the last one: the man from the back. No face and just one of the tires visible. Less is often more. The other pictures just explained too much and – well, the man was just not looking very photogenic in the other pictures. I think it's the perfect back cover for the book." 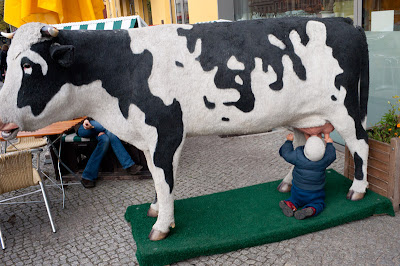 Berlin 2010
"I live in Berlin, Prenzlauer Berg. When I moved there in 1997 this district was the hippest place to be for artists and alternative ways of living. Old houses, cheap rents, a vital art, music and club scene. Today almost the whole area is gentrified but I still live here. This cow stands right in front of an organic supermarket and I think it's remarkable that those organic supermarkets try to attract their customers exactly in the same way as any American burger restaurant – with a life-sized cow. I pass this cow several times a week and was trying to get a good picture. On that day I was in a hurry, actually not thinking about taking pictures, when I saw the child playing under the cow. When I had my camera ready it just looked as if the child would drink from the udder. That was the perfect moment for my picture. For me this photograph is a symbol for Berlin Prenzlauer Berg nowadays." 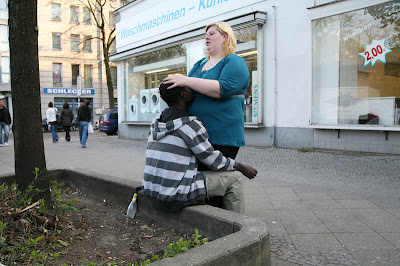 Berlin 2010
"Hm – I think there's not much to say about this one. I just saw this couple in Berlin, Neukölln, strolled around them and underhand I pressed the shutter. I wasn't looking through the viewfinder being afraid of disturbing the scene." 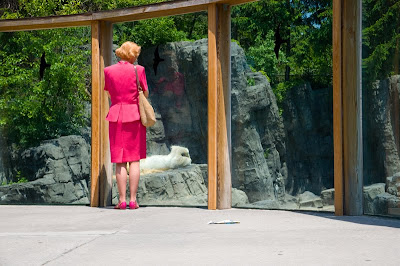 New York 2007
"This was taken at Central Park Zoo in New York. I was just thrilled by the haircut and the dress of the lady making her look like a relic from some long gone decade. She was standing still for a long time so I could take some variants in upright and landscape format wishing that the polar bear would turn his face to the camera. He didn't, but now I am very happy that he has this kind of undefined pose – it leaves the picture a bit more open and keeps the melancholy of the scene that could have been destroyed by a cute looking bear." 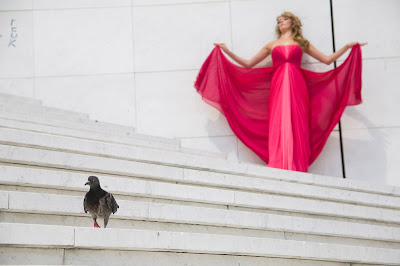 Paris 2008
"I remember this summer day very well. It was terribly hot and I had a hangover from a friend's birthday party the night before. I went to La Défence, a major business district of Paris, and was very floppy. So I sat on those stairs waiting for something to happen. A model apeared, a stylist and a photographer. A fashion shooting. Okay – nothing of interest as it makes no sense to photograph anything that's staged by another photographer. From time to time I looked over at them when suddenly this pigeon appeared. The bird walked very proud and elegantly in front of the static model spreading her wings. So I thought his was a good combination. Two shots and the pigeon was gone. I didn't notice the Ruck or Fuck or whatever is written on the wall when I was taking the picture." 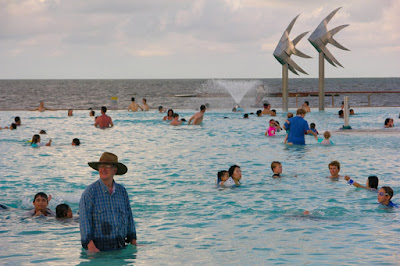 Cairns 2005
"This is one of the very few pictures from a trip through Australia in 2004/2005 that I still show in exhibitions. We had just arrived at the city center of Cairns – this is in fact part of the city center: a big pool right next to the seaside. I liked the fish sculptures and didn't notice the man with the hat who had turned his face to the seaside. When I was heading to take a picture he suddenly turned around and made this picture a special one.

Europeans who look at the picture mostly think it's funny that this guy wears a hat and a shirt in a swimming pool. For Australians this scene is normal - because of the ozone hole they usually wear hats and shirts in the sun. It's always interesting how different pictures can be read in different cultures."
Posted by Blake Andrews at 5:04 PM

I really like this "What was he thinking" series

great pictures, cool photographer! I especially like the cow and the couple.

great to read some stories about christian reister's photographs and great to see some berlin street photography here. i live in berlin since 10 years now and i don't know a lot photographers who catch the spirit of the city as brillant as he does. his alex book is one of the best about the city i think. i also love his „along the way“ series on his blog with fresh images every once in a while.

Thanks for sharing this work, very fresh and enjoyable... and for continuing to have a great blog!