Time to check in with my photo-related New Year's resolutions from 2010. I had three:

Of the few cameras I bought last year, the one which has provided the most consistent learning curve is the Holga 120 FN. Although it has been fun to use, I'm a long way from mastery. Resolution failed. 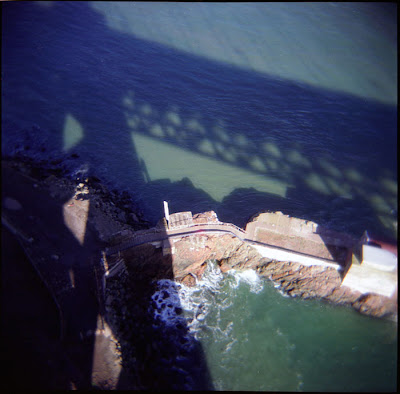 As for the blog, I wrote 259 posts last year. Some took me 10 minutes. Some took a few hours. I'm going to blend them all together and declare a one hour average per post: 259 hours of blog writing.

560 is more than double 259. Resolution successful.

3. Self publish a book of b/w photos.

I could list excuses but the basic fact is I didn't get my shit together. Resolution failed.

My photo-related resolutions for 2011:

1. Self publish a book of b/w photos.

2. Provoke at least 15 inquiries from bystanders and/or authority figures while shooting. In other words, get nosier.

3. Get completely caught up with developing, printing, editing prints and updating the website. Currently I'm one to five months behind on each of these.

1. Get completely lost at least once.

I'll check in on these a year from now. In the meantime, Happy 2011 to everyone.
Posted by Blake Andrews at 8:18 AM

I know this is a bit off track, but did you call your digital exposures 'snapshots' on purpose to differentiate them from anything shot with film? Just curious.

I call them snapshots because I don't put much thought into them. They're just quick flash shots without much deeper meaning.

Why don't you put as much thought into them as you would with film?

Granted, I don't know you, yet I feel compelled to suggest that you might be too hard on yourself regarding how you determine your levels of productivity. Plus, I suspect many folks are as grateful for your blog posts as they are for you sharing images.

@Droid, That's a tough question. When I take a photo with my digital point n shoot, it doesn't really feel consequential. It's just a bunch of bits and bytes which I can't see. Taking a photo with a film camera where you move the film afterward feels more like something happened, so I tend to put more energy into it.

Not that snapshots can't be important. I just don't spend as much time on them.

@Basinptc, I'm not really hard on myself. Just trying to set yearly baselines, however arbitrary they might be. I do tend to measure my productivity in terms of photos rather than blogging. My main creative goal is to make as many meaningful photos as I can while alive. Blogging is just a sidelight.

Just out of curiosity concerning photo resolution #1 (make a book): Do you consider to do the editing yourself or ask some local friends to help you, or maybe re-use what you already put on your website ? I figured out (but that's me...) that putting together pics for a book is interesting but also exhausting and brings some stress - and in my case I have probably much less pics to choose from.

I hope you do self-publish a book, I would love to see it!

That was a typo. Mentally I hadn't converted to the new year yet. It's now changed to 2011.

About the book, I am sort of a control freak so I will probably do the entire thing myself. It will definitely be mostly new photos. What's the sense of showing work that's already been seen?

You film consumption volume is intense. I put down around 70 rolls of 220 this year, with a few dozen 35mms. Even that feel like an overwhelming amount to edit. Couldn't imagine having an extra 400 rolls of the 35mm, and continue to write a blog as frequently as you do. Good work.

I enjoy resolution 2 of getting nosier, and that fine Holga across the Golden Gate makes me miss it so.

Destroyer's "Kaputt" should be one of those 365 albums. Comes out at the end of January, but from what's out now, what a treat.