Pranks for the memories

As a prankster I can't help being a natural fan of Mike Mandel and Larry Sultan's billboard project. In what has to be one of the alltime greatest pranks, Sultan and Mandel replaced various outdoor advertisements with strange images and diagrams. Sometimes it was covert, but often they did it in broad daylight while dressed as sign workers. 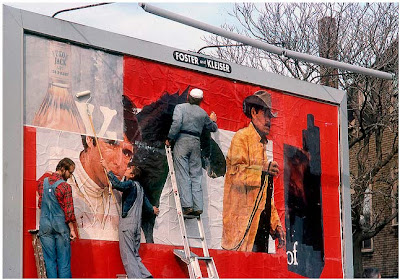 Chicago, Mike Mandel and Larry Sultan
This was a photographic project at heart, so during the process and after the sign was completed, they would document their work with photos. 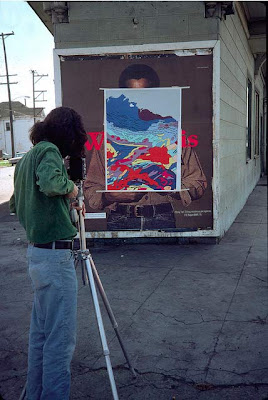 Mike Mandel photographing "Alaska" original
Since they looked official no one bothered them. This was back in the 1970s. You might run into more hassles now.

The images they used were quirky, noncommercial, and seemingly meaningless. Often they had mundane captions. 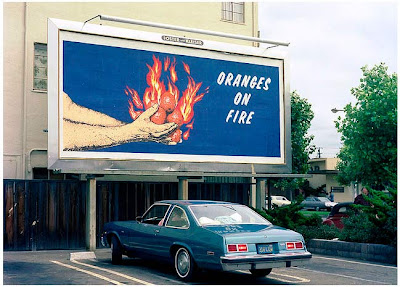 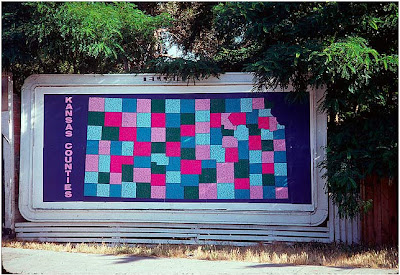 Kansas Counties, Mandel and Sultan, From "Sixty Billboards"
San Francisco Bay Area, 1976
I love these not only because they poke fun at advertising but because they tweak everyday expectations. I like to imagine someone driving by one of these signs on their daily commute and just being totally flummoxed. What the heck? What does that mean? How do I buy oranges on fire? 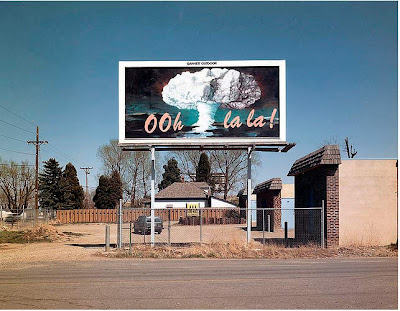 Ooh La La, Mandel and Sultan, Boulder, CO, 1982
Again, this was a few decades ago when outdoor signs were expected to be direct. Nowadays advertising is often so obtuse and ironic that one might just assume "Ooh La La" was an ad for Levi's or something. But back then a sign like that might be a mental wake-up call, a zenmaster's stick tapping on your skull. What? Huh? Why? 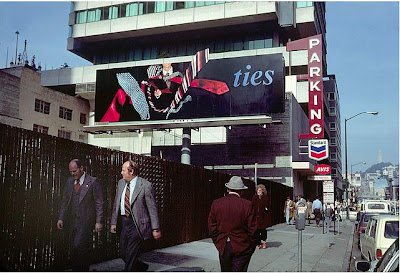 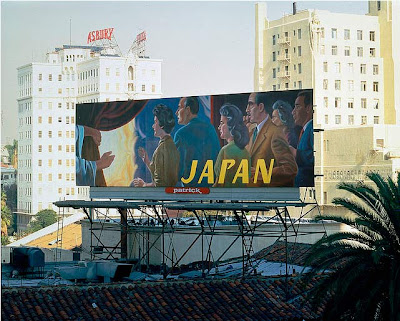 Japan, Mandel and Sultan, From "Trouble Spots" series
Los Angeles, 1988
I can't help wondering where are the photographic pranksters of today? Where has the subversive spirit gone? We have plenty of galleries and reviews and magazines, but they all seem motivated to some extent by self-aggrandizement. What about doing something for the simple sake of pranking, to just tap a stick on someone's skull and ask "Have you seen me before?"

Posted by Blake Andrews at 6:16 AM

I see what you did there. You so smart.

So then the answer to the last quiz is finally revealed! My girlfriend and I had actually lost sleep trying to figure it out. Brilliant - and I learned something in the process.

Nice work, Spence. Please email me your address and I'll get your print out to you.

I don't know if it can actually be considered a "prank" but you should look at what JR did in France when he was starting his career and also his more recent project in Palestine.
Here are some links where you can see part of his work:
http://agencevu.com/stories/index.php?id=752&p=246

Are you familar with Bansky?

"I can't help wondering where are the photographic pranksters of today? Where has the subversive spirit gone? "

Could be that there is a shift in the playing field, and that today's pranksters are more likely to be found on the internet rather than on the tangible public space (by the way the internet is a public space in its own right).

Thanks everyone for the links.

Vaina, sorry you think I'm an asshole but your response wasn't very clear. "I see what you did there. You so smart." That's not enough to go on.

So you gave the prize to the first person who recognized that this posting was (obviously) connected to your quiz? Unless I missed something it seems that SR came the closest in the original posting.

Let me explain my reasoning. After the initial quiz was posted, all sorts of guesses were thrown out. SR said "advertisement or billboard" which was quite close to the truth but wasn't very specific. It sounded as much like a guess as all the other ones.

To find out more I sent SR an email saying "About the quiz, you actually came closer than anyone when you guessed 'advertisement or billboard', but that wasn't quite specific enough.", hoping that he would clarify. If at that point he'd offered more info, e.g., "pg 162 and 163 in Katzman's book Photography in California 1945-1980" I would've accepted that as correct. But nothing more specific came of it until today's post.

It's a judgment call. I just went with the first answer that seemed to offer concrete info. Sorry if it seems arbitrary or confusing.

I read through all of the original answers and to me SR’s is the only one that was on the right track. All the others weren’t even close, although I did say that the last photo made me think of Mike Mandel. I think SR should get a prize.

I saw the oranges on fire billboard in Syracuse sometime in the '70's or '80's. I wonder if one of them was a visiting artist at Light Work.

B: Are you aware of the Billboard Liberation Front (BLF)? They've also been "improving" billboards since the 70's. I photographed them recently for Hi-Fructose Magazine:
http://www.billboardliberation.com/

The thing about BLF and Ron English (whom Chris Carlson also mentioned) is that their motivations are clearly political/activist. They convert commercial messages into subversive ones, or else create them from scratch. Nothing wrong with that, and I've actually done some conversions myself, but it's easy to get a grasp on.

In contrast, Mandel and Sultan's billboards are impossible to decode. They have no overt meaning. They're not political. They're just random messages and images plucked from outer space. They're the billboard equivalent of a crazy guy talking to himself on the street, but translated through the lens of corporate advertising where you'd least expect to see it. That's why I love them. They're pure pranks.

The way we see and react to images is changing so radically. And if your going to build a pleasant urban landscape, billboards would be the place to start