The shifting proximities of photography and music 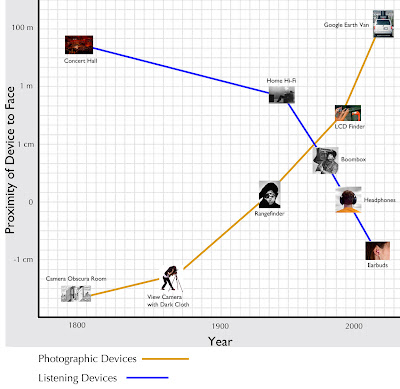 Posted by Blake Andrews at 7:29 PM

Yes but... isn't there a confusion between "making" (photographs) and "experiencing" (music) ?

Jacques, you're right that I'm comparing apples and oranges here. A more direct comparison might be between musical instruments and cameras. I think the two examples I used could be generalized even further. Creative tools seem to be increasingly mediated, while consumptive tools seem increasingly intimate. I thought about applying it to other realms like transportation tools and tools of warfare. But in the end I just dig music and photography. They are like symbiotic organisms.

Actually the very making of music is very tactile ever since, whether you write on music sheet or you play an instrument. Some experimenting instruments allow no physical contact but it's not very mainstream (and if you are interested in that specific topic don't miss the theremin, that weird instrument that I believe everybody know the sound but few know how it looks like and works).

But on a broader frame it is right to say that there is increasing mediation, together with more and more intimate consumptive tools. By the way what is interesting with music is that before recording exists performance and experience were mingled so to speak. The musicians plays and the audience listens at the very same moment. The introduction of recording was a major breakthrough.