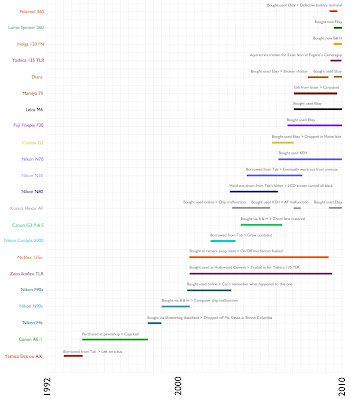 Posted by Blake Andrews at 2:49 PM


Man, do you have insurance?

I've claimed some of these on my homeowner's policy. Part of carrying a camera everywhere is you tend to burn through them quickly.

I do love that none of these have been sold (a trade-in doesn't count), they've all been used to death. Very nice work.

good lord man, for a guy that rarely talks gear you surely have had your fair share of cameras.

certainly, you have had a lot of cameras of many kinds, rangefinders, Dianas, slr, of film, digital... What drew you in the acquisition of each camera? Was it coincidence? Or simply arise? You bought it for some use in special?

What a shame about the Mamiya 7

... Does that mean that "the cameras you have known but did not love" do not feature on the chart ?

for me part..i'd love buy some camera Instamatic 126.. i'm lovin of those beauties... if somebdy know any about like'n'where buy it, please tell me

I once new a painter who blogged about all the paint brushes she owned over the years. She finally bought a Kolinski Red Sable and never looked back.

There are a few I didn't include, like a waterproof Pentax I used for kayaking and a Mamiya body I owned for a few weeks while fixing the 7II. By and large I've loved them all.

To answer Plopez' question, there isn't much rhyme or reason to what I buy. I like small handheld cameras. I use them hard and when one breaks I replace it.

Looking at the chart I think the general trend is toward simpler, less fussy cameras. Less is more.

Can we start a collection to buy you some straps?