After reading this thoughtful essay in Slate I designed a small test to explore the natural color variation of web photos.

I did a Google image search for Stephen Shore Merced River. I figured that would make a good base image because it's widely disseminated on the web and because it has a subtle palette. Also, since Stephen and I are practically best friends I thought it would be nice to give him a plug.

The search turned up up roughly 2600 results and a surprising variety of color spaces. I think you'll be able to judge them most clearly on an Apple monitor. 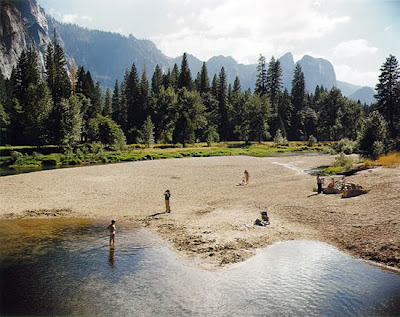 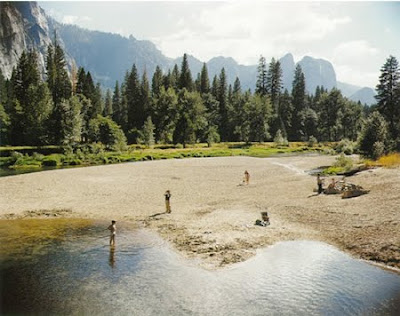 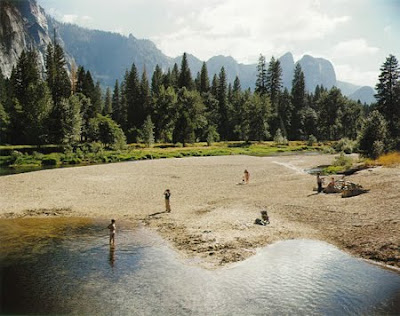 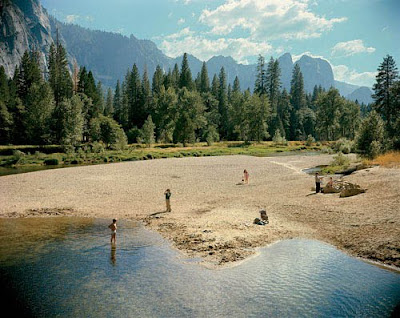 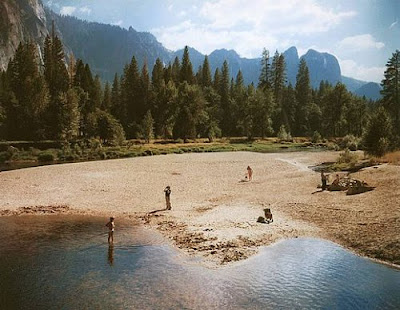 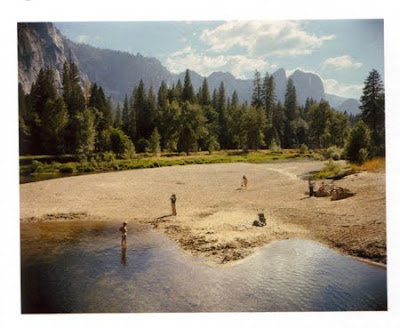 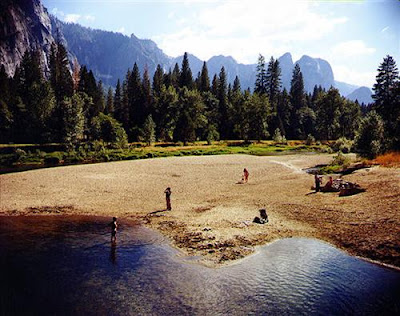 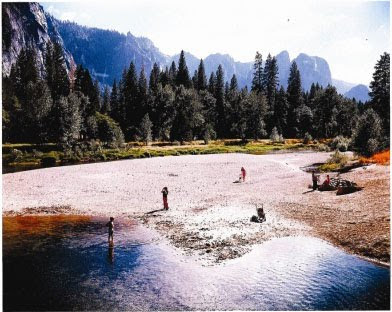 Will the real Merced River image please step forward? Which one is the closest to "reality"?

One point of the Slate essay is that as far as the internet goes they're all the real one. Or, put another way, color variation is so variable across platforms and graphics treatments that there is no "real" palette. Even when a specific color profile is assigned, who knows if it's the "real" one? And variations in monitor specs and calibrations can render it relatively unimportant.

Well, big deal, right? We knew that. But that doesn't get around the nagging fact that 95% of the photos we (or at least I) encounter are on the web. E.g., look what you're doing right this minute. But is the web even a viable outlet? Seeing photos online is like going to Goodwill and plugging your iPod into random stereos. Which one plays the real sound?

To see the real colors in this photo you'd need to view it as a print. In fact my friend Bruce has this picture on his wall, and I've looked at it closely. But even then it's hard to trust. Who knows how much the print has faded or the color shifted, or if the light in his home is neutral, or if Shore even had it printed under similar lighting? Or, or, or... No, prints aren't truthful either. Books? Same issues.

No, I think the only way to see the "real" color of this scene is to be there with Stephen Shore in Yosemite National Park on August 13, 1979 as he's making it. But if you're there at the scene, what's the point of making a damn photo? You know what you should do instead? You're standing on the shore of a beautiful river. It's hot. Take a swim and forget about all this stuff.
Posted by Blake Andrews at 7:33 AM

brilliant! But this improved version is still my favorite:

The web was my primary outlet for photography. But a while back I spent a couple hundred dollars on a color calibration thing for my computer and many many hours putting together a web site, only to go to my sister-in-law's house pull up my site and have photos look really really badly.

I still play on the web, but the finished product as far as I'm concerned is again the print.

To make matters worse, most photographers aren't using color accurate displays, let alone the general public so its an impossible task at present. Video production faces the same challenges, and the standards the adhere to can't approach the accuracy of physical printing.

Monitors are not prints and if you want to see what a photograph really looks like, you need to print it, or you need to go see a print on exhibit.

I hope that Jim Lewis is right and the photobooks are here for awhile. Personally I prefer books for looking carefully at photos, over using the internet - and it has little to do with colour accuracy.

Great point. I teach colour management here in Australia and am amazed at how few people understand or care.

I alos run a lab, so I love people making prints and book.

Yeah, well, there isn't a better arguement for forecasting books as the next fine art ("medium" for lack of a better word). We'll have to come up with a reasonable solution for introductory imagery on the web, where either color isn't used much....or(?) You tell me.

No, sorry, I didn't intend to remain invisible. That comment about books (magazines, too) was mine.

What's up with the exposure in the sky? Some of these look like they are altered beyond color-space.

To me the most stark difference between the images on your page and the print in my one-picture book (no. 43) is the tonal range, not the color pallette. The sky is blown out in most of the computer images but not on my print...or is it my computer monitor?

You're right that some of these are blown out as well as strangely colored. Generally a book is probably more reliable. If online images are Darwin's finches, books are the Galapagos. Both change over time but one diversifies much more rapidly and erratically than the other. Who knows how that Shore image will look in 100 years?