Brian Dyson: What Was He Thinking?

Brian Dyson is a photographer based in Oliver, British Columbia. The photos below are from his book One Eye Open, One Eye Closed. 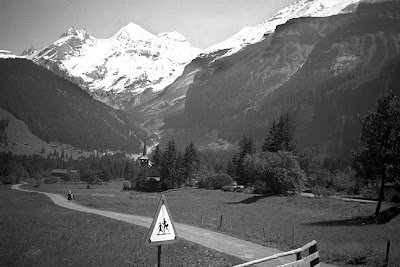 "When I was fifteen I went to Switzerland with some friends on a hostelling tour. Our intention was to walk up this valley to a climbing hut at about 10,000 ft. As we waited for a couple of stragglers I looked up the valley and saw the ambiguity of the signpost and the woman approaching down the pathway. I was traveling with my father’s Kodak bellows roll film camera and struggled to get it out of its case, open the bellows, cock the shutter and grab the shot. I remember standing on a loose brick wall to get the elevation and wanting to move further to the left so that the kids were more “in the middle of the road” but I didn’t want to risk blowing the shot so I grabbed what I had." 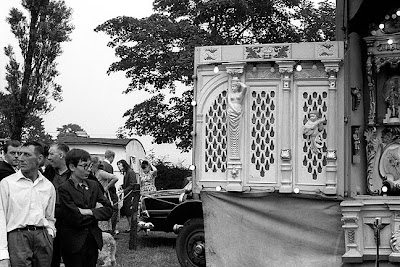 "This shot was taken at a traction engine rally in Yorkshire a few years later. I saw the woman raise her hand to adjust her headscarf and realized she had unknowingly adopted the same pose as the cherub carving on the calliope organ." 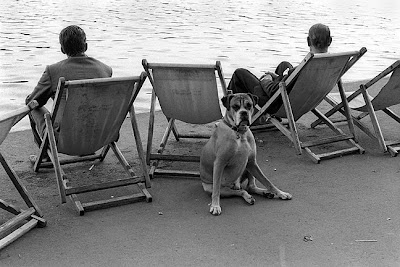 "After art school I worked in London for a year as a camera assistant and black and white printer for a commercial studio. This shot was taken at the Serpentine Lake in Hyde Park. Sometimes decisive moments can last forever. This shot was a no-brainer – and kind of a freebie." 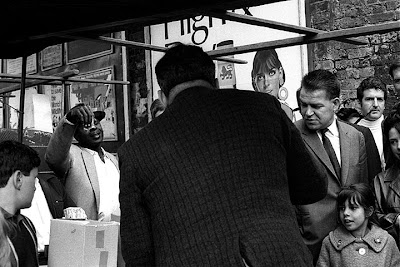 "… and then again sometimes you have no time at all. Another London shot taken at the working class end of the Portobello Road market. I edit in the viewfinder and only take single pictures unless I’m documenting an event. In this case what caught my attention were the eyes of the woman in the poster. I realized that in black and white there would be a strong ambiguity between her eyes and those of the people on the right, making her one of the crowd. I took a shot somewhat to the right of this position. The barker was selling chocolate bars in bulk and yelled out “Anybody else want another five bars for a quid?” and the West Indian guy on the left said “Yea, I’ll take some” and lifted his pound note up to get the barker’s attention, using his finger nails to create another eyeball to add to the already ambiguous scenario. A quick reframe to the left and Click! got it – shot number two. The crop on the right edge is frame-edge tight. A bit further to the left and it wouldn’t have been so dynamic. I wish such shots for everyone working the streets with a camera." 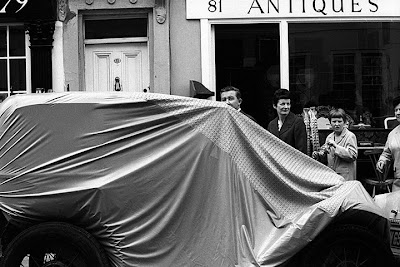 "This shot was taken at the posh end of Portobello Road. I saw the draped car and realized how beautiful it would look in black and white. I hung around for a short while until a family of three entered the frame. They were watching a busker on my side of the street as they passed by. The man had the perfect height for the job. Click!" 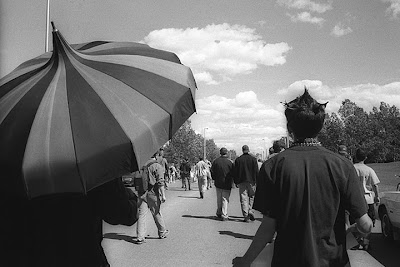 "Calgary, where I lived for thirty years, is a prairie city with limitless horizons producing endless urban sprawl. Consequently the city is designed for the automobile and is not street life friendly. People action happens on designated days such as street fairs, protest marches (licensed), and the annual Stampede parade. This shot was taken at an anti-G8 rally held in the city in 2001. I was following the guy with the umbrella. The guy on the right came running into the picture from my right side. What was I thinking? Click!" 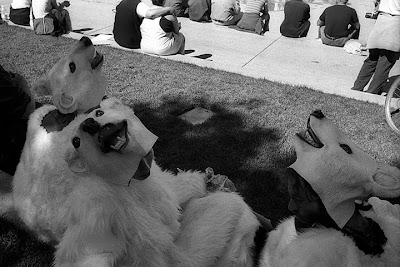 "Another shot taken at the same rally. The bear in the middle looked menacing. The other two looked cartoonish. They all looked like they’d had their throats cut. The separation of the three from the people in front was stressed visually by the edge of the grass. The two faces popping out of the bear suits were reading something together, as oblivious to the surreality of the situation as the people in front of them." 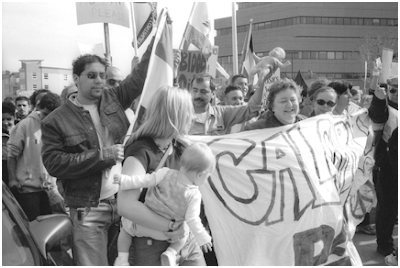 "This shot was taken at a rally protesting the Iraq war. It was a very busy, chaotic shot with no visual cohesion…until the guy raised the plastic doll above his head, reflecting the baby in the foreground, and providing the geometry needed to hold the frame together." 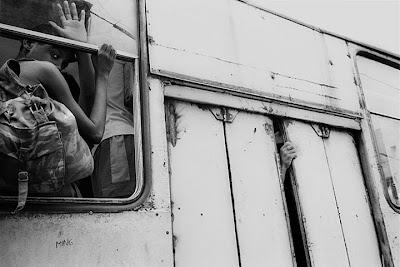 "Havana’s public transit system is rather primitive with very few seats and people have to hang on to something to maintain balance. Hands are a strong element in many of my shots. They’re usually the most active and unpredictable parts of a person and they play a large part in determining the spacial relationships between people, which is what we street photogs are always looking at. When I shoot I’m pretty invisible but sometimes somebody makes eye contact outside of my intent and I include that event as an extra dimension beyond the connected elements within the frame. The tension established through this connection between the individual and myself is transferred through the print to a third party, the viewer." 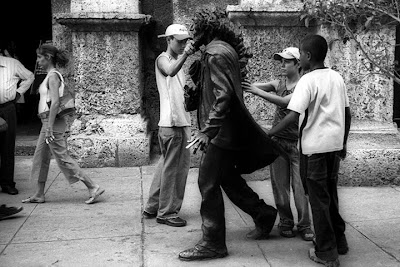 "Havana has great street culture. This statue celebrates El Caballero de Paris, a street vagabond of the pre-revolution decades. People squeeze his beard or pull his finger for good luck. I was hanging around watching people interact with it. A woman approaching had the same expression of intent and similar haircut and so I went for the obvious. Wrong leading foot but no time left so…Click!

There are lots of triangles in this shot. I like the way the triangle of hands in the right half of the picture anchors the group of guys to the statue…and the way the statue is anchored to the figure of the woman by the triangles of their strides…but also by their hands falling on the same horizontal, emphasized by the line of the pedestal’s base stones. If the woman hadn’t been carrying something white in her left hand the photo wouldn’t have been so successful. Needless to say, I only discovered this after I printed the negative."
Posted by Blake Andrews at 2:41 PM

If I were looking at these in a gallery I would need Brian to stand next to me and explain each one.