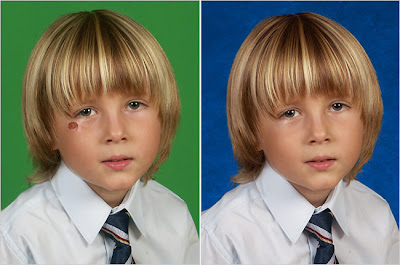 At my grand-ma's place there was a photo of me and my brother, done at the same age or so that this little boy. It was a similar school portrait with similar hair cut back then (mid 70s) at a time when they did not bother to retouch the pics (I say that as a disclaimer to those who say that photo manipulation was done way before PS came out trying to make the point that nothing is new under the sun).

On that portrait we both had several heavy scratches on the face, because we used to fight with our neighbor mate who was a rude guy. Each time I saw the photo and these scratches would remind me that old time and that naughty mate. It was a great portrait finally. And now that my grand-ma has passed away this photo is the best memory I have from her place.