I received my 8 x 10 of Amy Stein's Powerpuff Girls in the mail last week. 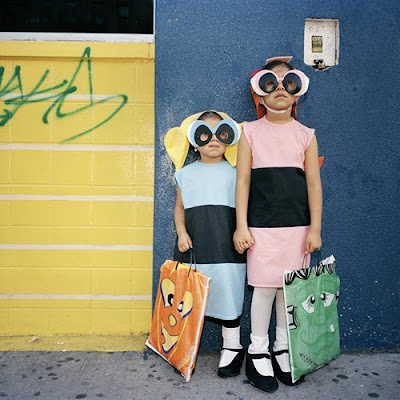 This is only the second time I've bought a print from 20x200. The first time was a few years ago. I liked the photo on my monitor but when the print came I was disappointed. It looked like an inexpensive mass-produced computer generated copy, which probably shouldn't have surprised me. After all that's what it was. I don't know what I was expecting but anyway it went in a box and I hadn't bought anything again until now, even though I like much of what I've seen on 20x200.

So why now? One reason is that Amy Stein hand printed these in an old fashioned color darkroom. I know from personal experience that making 800 prints in a darkroom is a royal pain in the ass, so when a person goes to that trouble I like to reward it.

There's also the fact that I generally find darkroom C-prints more impressive than inkjets. Amy Stein's print is no exception. It looks great! The colors are spot on. The image is sharp and luminous. I've held it next to my other 20x200 image and it really blows it out of the water. Both may be inexpensive mass-produced copies but one's got soul and one doesn't, Amy Stein's soul in particular. And some of those little girls' souls too.

I don't mean to turn this into an old fashioned darkroom v. inkjet debate. Or maybe I do. I know inkjets have come a long way, and they're probably more archival, and they've made color printing far more accessible. I've seen some very good ones. It's just that when I see a well done C-print it seems to have a character which is missing in inkjets. Something in the purity of color? Or the clarity? Or maybe it's just personal, like preferring vinyl to an mp3. In any case, it's hard to imagine any digital version of Amy Stein's image topping my C-print.

Meanwhile I've just finished shipping out the first round of workprints from my offer a few weeks ago. 1500 hand-printed bits of my soul, each one unique. What a pain in the ass. My soul feels lighter after unloading them all.
Posted by Blake Andrews at 12:42 PM

The one thing I've never seen is the same image printed as an inkjet and as a C-print. I agree with you though, that a well made C-print is hard to beat. If only they were archival.

In the grand scheme of things nothing is truly archival.

I bought this print too, Blake, and agree with everything you said. The colors have a quality that you can't get with an inkjet print.