I've been hanging out a lot lately with Alex Webb. Yes, the Alex Webb. Well, maybe hanging out isn't the right term exactly. It's more of a long distance friendship. Actually we haven't even met in person yet. But on Facebook we're solid buddies. Peas in a pod. I know for a fact that if Alex Webb ever had a small private gathering at his home and invited only his 2000 closest Facebook friends, I would be on that list. We're that intimate.

I'm close friends with a lot of other famous photographers as well. Anders Petersen, Carl de Keyzer, Eli Reed, Larry Fink, Jeff Mermelstein, Larry Clark, Mitch Epstein, just to namedrop a few. It's sort of crazy how popular I've become recently. Scads of friends. Again, I should probably add the disclaimer that I haven't actually met any of these people. We're more like, well, just Facebook friends at this point. Which if you think about it could be the first step to deep lifelong companionship. Or not. 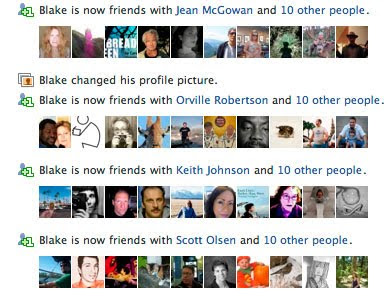 Forty of my closest friends

Jeff's been weird lately. The other day I sent him a Facebook message and he totally ignored it like he didn't even know me. As If!

To tell the truth it hasn't been just Jeff. None of my famous friends have responded to my recent messages. And I've sent literally hundreds upon hundreds!

You'd think that if a good friend tries to get in touch with you, common courtesy would result in at least an acknowledgment. But no. Instead the only replies are silly messages from attorneys saying bla bla bla restraining order bla bla bla cease and desist and all these other words. I'm not sure what they say exactly since my policy is to immediately delete any message that it isn't from a good close friend.

I tried to become friends with Stephen Shore but that didn't really work out. Here's what you see when you invite Stephen Shore to be a Facebook friend.

Now to me this message could be interpreted a lot of ways. It all depends on what is meant by "if you know Stephen". I mean technically that could mean a lot of things, right? Well that's not the way his lawyers saw it. Harassment, bla bla bla, the usual legalisms. I'm not sure why Stephen's being like that but it makes me sad.

For a while there Stephen and I were, at least potentially, practically inseparable. But at this point technically speaking we're no longer friends. That's a shame. I hate to lose touch with someone like that after all we've potentially been through together. But that's just how it goes sometimes.

Oh well. Whatever else happens at least I've got Alex. Friends for life, right buddy?
Posted by Blake Andrews at 10:53 AM

Of course, assuming you don't stick the lawyers on me.

I have bad news - we're not friends anymore, at least temporarily. It is in the realm of possibility that I was disabled for telling an off color penguin joke. Sheesh.