What the heck has gotten into Gregory Crewdson? His latest project, Sanctuary, represents such a one-eighty from his previous work that it's barely recognizable. Elaborate staging? Gone. Color? Gone. Wall-sized prints? Gone. In their place are these delicate black and white studies from Italy. 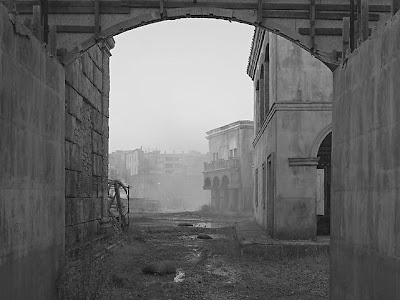 Untitled (08), 2009, Gregory Crewdson
They're printed so modestly that several will fit on one wall. 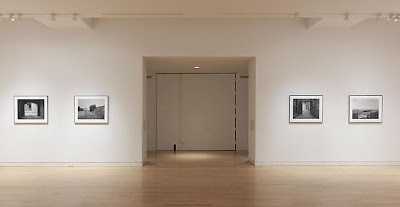 Crewdson show at Gagosian Gallery, up through this weekend
If there is any consistency with past work, it's in the precision of pre-visualization. These aren't casual snapshots. The degree of orderliness is roughly on par with his earlier cinematic murals.

Still, if you saw these on the wall with no captions you'd never guess Crewdson. At least not until now.

I've been racking my brain trying to think of another photographer who made such a radical shift over such a short course of time. Shore? His switch from snapshots and postcards to view camera was fairly dramatic. Meyerowitz? Within a few years he transitioned from b/w street to color street to large format static vistas. Still it took him a decade, which isn't very fast. Friedlander's switch to Hasselblad in the 80s was profound. Evans and Callahan come to mind, but they both experimented so much that it's hard to identify them with any one baseline style.

And then there are the countless photographers who've transitioned over time, generally from smaller to larger formats and from b/w to color. Annie Leibovitz is a good example. Her early b/w photojournalism is a million miles from what she's doing now. Or is it? 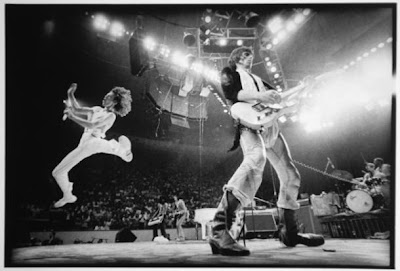 The Rolling Stones at The Spectrum, June 29, 1975, Annie Leibovitz 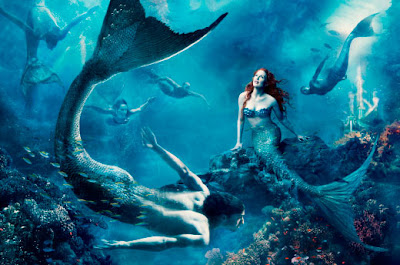 Julianne Moore and Michael Phelps, from the recent Disney Dream portrait series, Annie Leibovitz
But to some extent all of these shooters have kept their photographic identity intact. They've repackaged themselves but it's still recognizably them. They're like Dylan at Newport, altered but easily identified.

Crewdson's departure seems more radical. Not only did he transform the size, palette, and methodology of his photos overnight, he abandoned his very way of seeing. Instead of hiring a forty person crew to build pre-conceived sets, these are found scenes, and quiet ones too.

So what's a good comparison? It's probably hyperbole to compare it to Les Demoiselles d'Avignon, but I think it does belong on that spectrum of unrecognizability. Maybe a more appropriate comparison is The Beatles between roughly 1965 and 1967. Were they still recognizably The Beatles after embracing psychedelia? Yes, in retrospect. But if you took The White Album back in time and played it to a someone in 1964, that person wouldn't have a clue who made it.

Do any other photographers come to mind? Which ones have become unrecognizable overnight?
Posted by Blake Andrews at 7:14 AM

Weegee after he got recognized as an artists and started doing portraits printed through prisms.

This may not be very contemporary but I was thinking about Margaret Bourke-White when she shifted from a highly-crafted and ingenious work on industrial architecture to photojournalism. Though one can say her work has remained in the documentary vein I believe the process of making pictures, the involvement, were radically different.

brings to mind the quote from Francis Bacon on D. Lange's darkroom door:

"The contemplation of things as they are without substitution or imposture without error or confusion is in itself a nobler thing than a whole harvest of invention."

How about Todd Hido?

Hey, there's still the consistency of having someone else operate the camera for Crewdson, right?

Just tell me one thing, Blake. You're going out there to destroy them, right? Not to study. Not to bring back. But to wipe them out.

Keep those suggestions coming. I'm still on the fence about Evans just because he was all over the place even before the Polaroids. You could maybe say the same about Kertesz and his Polaroid fling.

Most of Todd Hido's stuff seems pretty identifiable (maybe creepiness is the unifying element?). Did he have a previous life as a photojournalist or something?

And in response to that last comment, I don't have any plans to wipe them out. I'm actually just here to study them before returning to my own planet.

It's odd that Evans would not be associated to any one style yet he's mentioned all the time as being the greatest influence in photography. Personally I haven't seen a lot of his work but to me the Polaroids are so radically different (colour/square) that I would never have guessed it was him, and from what I've read, nobody else could either. Can you name some other of his works that bridge the gap between his more well-known images and these? I'm not a huge fan of his so I've only seen the usual ones.

What I mean by Hido is he went from dominating night landscapes to hotel room portraits of half-naked girls to a 70's-washed out style just like that.

They just happen to be shot there (in the same case as a movie is shot elsewhere, though it may depict another location).

These are images reference Hollywood production stills, shot for documentation and continuity. They still reference fantasy, light, and mood all within a recognizable setting.

I realize they're film sets, but that doesn't effect the fact that these seem fundamentally different. In his earlier photos he had to dream up the whole image ahead of time, then hire crews to build his pre-conceived ideas. For this series, presumably he wandered around the sets with a camera looking for scenes but with no idea ahead of time what the photo might look like. One method dreams the idea before, one method comes upon the idea after. I think they're two very distinct approaches.

The fact that they're made on film sets might lend them some continuity with his earlier (cinematic?) stuff but the where doesn't seem as important as the how, at least to me. Then again maybe he's putting us on and these sets are heavily pre-mediated and post-produced. Who knows?

I don't think I can bridge the gap to Evans' Polaroids. Suffice to say he had his hand in a lot of formats and a lot of styles. I hereby certify them unrecognizable.

I said it over on DLK Collection, and I'll repeat it here: After so many original examples of using film sets/stills by artists like Baldessari, Cindy Sherman, Larry Sultan, and John Divola, the idea seems well worn at this point. Tired, even. This work is too easy for an artist of Crewdson's caliber.

I guess things "as they are" are maybe not quite so if stage sets.
Anyway... Check out Charles Moore's switch from B&W civil rights journalism(Powerful days book) to color travel images of Calif. gold country(Mother lode book).....

Well, as I said, I'm still... collating, actually, but uh, I have confirmed that he's got an outer layer of protein polysaccharides. Has a funny habit of shedding his cells and replacing them with polarized silicon, which gives him a prolonged resistance to adverse environmental conditions. Is that enough?

When Eddie Adams went from shooting in war in Vietnam to shooting for Playboy, that was pretty radical

MG said... "These images are conceptually in line with his previous work."

I agree with this.

B said... "he abandoned his very way of seeing."

Completely disagree. But he has certainly abandoned our previous notions about his way of seeing.

Just because he has changed his approach doesn't mean he doesn't see exactly the way he saw when creating his monolithic, constructed colour pictures.

Last year I heard Crewdson speak in a consortium on David Lynch.

Following are some (paraphrased) quotes from him that I wrote down on the day. I'd say these images are fully in line with his way of seeing no matter the approach:

Every artist has one central story to tell. The story needs to remain elusive and foreign to the maker, who searches for meaning through a sense of mystery or wonder in everyday life. Reveal the psychological story. Locate a sense of mystery within yourself.

In photography there is no beginning and no end, just the impregnated moment, an invitation to another world. Create something that is at once familiar and strange.

Tell a story which remains withheld, that lays beyond the picture and shows all the secrets inside you.

He said he's interested in frames within frames - windows to windows. And that his core preoccupations continue.

Not in a rational scheme of perception.
Moral notions imply attributes to substances which exist only in relational duality.
Talent is luck. The important thing in life is courage.

Hmmm, food for thought there Sonja.