Somewhere near the nexus of Vivian Meier, Boystown, and Cafe Lehmitz lies the ghost of Billy Monk. 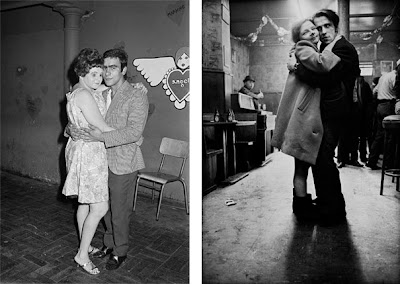 L: Les Catacombs Club, Billy Monk: R: Cafe Lehmitz, Anders Petersen
I first learned of Monk via his inclusion in this show but tracking down his photographs had been difficult until yesterday, when Michael Stevenson Gallery in Cape Town was kind enough to email me a huge batch of images. I was immediately gripped. 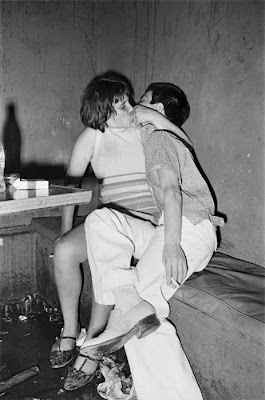 It was funny to get this email on the same day I received notices announcing the finalists of Hey Hotshot! and Critical Mass. 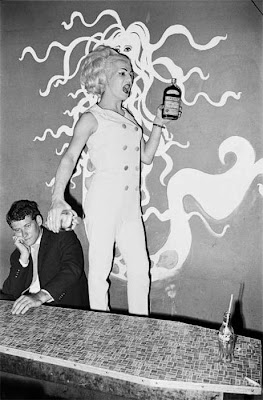 I haven't yet reviewed these portfolios in depth but my solid first impression is that Monk's photographs —taken a half century ago by a forgotten amateur snapshooting bouncer— possess more grit, depravity, and raw wild power than anything I see in either contest. 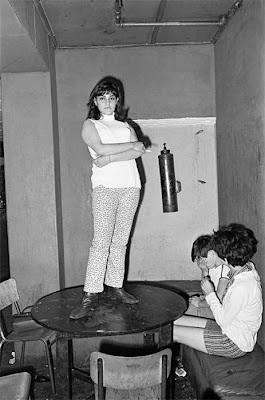 My hunch is that if Monk's portfolio had been entered in these reviews, it would've been knocked out in the the first round. 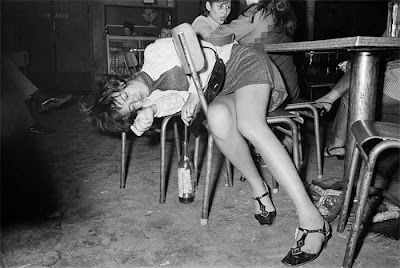 I doubt it would even reach second base. 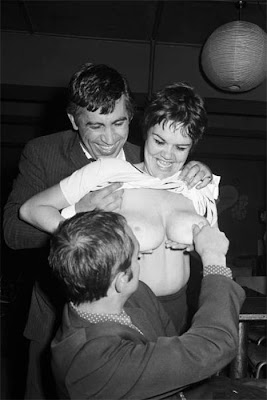 I'm not sure what that says about the state of contemporary photography, or about me. That the photo world tends to repeat itself maybe, 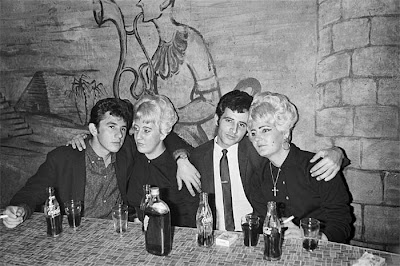 or that I'm isolated in my opinions or that I romanticize the past. 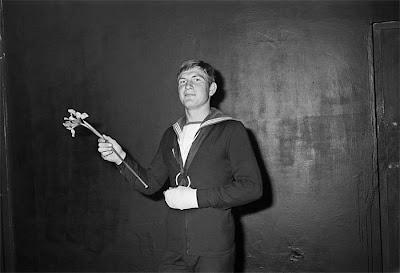 Or maybe I just need to get out more. 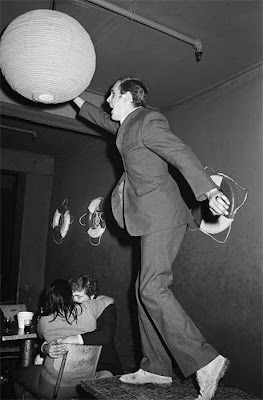 Regardless, I can't help pointing out 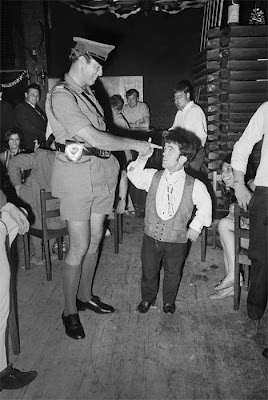 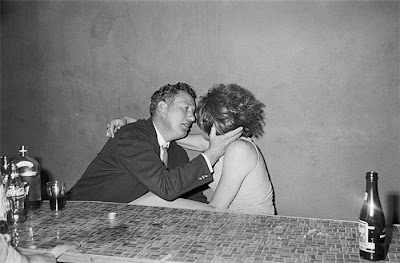 the more it risks falling in love with itself. 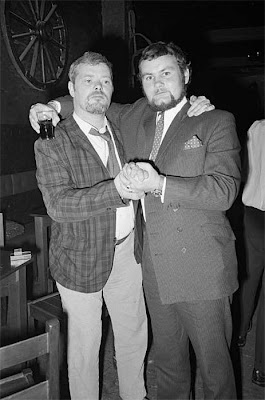 (All photographs by Billy Monk unless otherwise noted. Photos reproduced courtesy of Michael Stevenson Gallery, which is hosting a Billy Monk retrospective in early 2011.)
Posted by Blake Andrews at 8:00 AM

The hollow Time Cube in which the 4
quadrant corners of Earth rotate, equates to
your 4 corner bedroom, or to a 4 corner
classroom which represents the 4 corners
of Earth - in which stupid and evil pedants
teach dumb students 1 corner knowledge.
Each of the 4 corners of Earth is the
beginning and ending of its own separate
24 hour day - all 4 simultaneous days within
a single rotation of Earth. Place 4 different
students in the 4 corners of a classroom and
rotate them 4 corners each. Note that they
rotate simultaneously wthin the same Time
frame as if only one is rotating - just as the
4 different days on Earth rotate. 3D math
applied within this hollow Cube would be
erroneous math, as it would not account
for the 4th corner perspective dimension.
Place a 100 people within this Cubic like
room and they will not increase the number
of corners anymore than 6 billion people on
Earth will increase the 4 corners of Earth.
It is dumb, stupid, evil and unworthy of
life on Earth to claim that this Creation
Cube has 6 sides - or no top and bottom.
Academia equates to a deadly plague.

A good find. I love photos of bars. Some of these remind me of the English photographer Graham Smith, back in the 70's (not the music photographer by the same name).

The question is, can you take pictures like those? It's all very well to have good taste

Nope. I can't take photos like these. Maybe that's part of their charm for me.

Bravo, thanks for posting

I love that stuff. Really talks to me, it's visually rich, there's plenty of detail, and on top of that looks good and is disturbing. On the other channel you can check some pictures of cakes.

Not true.
Man, unlike any other thing organic or inorganic in the universe, grows beyond his work, walks up the stairs of his concepts, emerges ahead of his accomplishments.

Channeling Brassai in some of those.

I thought Billy Monk's work deserved it's very own space in Brighton, but the pictures were stuck in a less than optimal corner, giving way to the other photographers' work presented in the same room. Also I found myself distracted by the nearby piles of rubble and pools of wet (derelict building).

Your statement that these photographs wouldn't make it past the first round of a contemporary photography contest is silly. You are not the only one with the power to spot memorable photographs.

If you and your frumpy pals are so down on contemporary photography, start your own competition. Make the photographs you want to make. Pull yourself out of your black heart navel-gaze and do something.

Bill, you're right of course. It is easier to take potshots than to enter into the fray. I find sometimes it's easier to write posts in an us v them manner. Makes for more compelling narrative than the peace-to-all approach. But in general I enjoy seeing what's in those contests.

@Bill: Well, I'd say Blake is doing plenty. Bringing work like this to a wider audience, not to mention consistently producing work of his own that he believes in.

@Blake: What's up with all the anonymous troll comments you get around here? Ha.

Bryan, you're right that there do seem to be an increasingly number of anonymous and pseudonymous comments. I'm not sure why. I think most of them are sort of fun and I let them go. The only times I've deleted comments are when they're obvious commercial spam or when pseudonymous commenters take the guise of real people (for example, someone commented posing as me once. Not cool). But otherwise, let the weirdness fly...

Blake, my man, don't listen to BryanF. He is just being his usual presumptuous, pricky and patronizing self. This wanna-be high priest of street photography ought to just leave us all anonymous photographers alone.

What have we ever done to him?

Well, back to the images - they are great.

However I do not see these as being street photography; or at least how it is being increasingly and narrowly defined by a group of particularly vocal, overly opinionated photographers.

Now on to this Bryan F character. I totally agree with the previous anonymous poster.

He throws out his opinions at the slightest provocation, often with an unwarranted degree of scorn.

Then when someone disagrees or offers different views he shouts them down telling them they are stupid, uninformed or simply not good enough to be discussing "street".

The end result is that he usually winds up looking like a fool.

You can't help but dislike the guy. And it really does boil down to whether he has generally accepted likable character traits, or generally accepted unlikable traits (hypocrisy, abusiveness, imperiousness) Unfortunately, its the latter.

The images don't need to be called street photography, and I didn't label them that way.

About your second comment, although I'm not sure why you've targeted Bryan, your opinion is well expressed and interesting. Why not attach your name to it instead of posting anonymously?

The art world is two faced.
On one side you need to kiss ass and suck dick to get recognized. On the other is your true opinion which you need to hide for fear of being ostracized by the community.
This is basic common sense Blake Andrews. Don't act so ignorant.

gene ray, i don't understand the need for the 'art' in front of world in your previous post.

What? Try to string two sentences together so I can understand you better.
Please detail what you don't understand.
It's the second time that you don't give a shit about what is going on in front of the camera, all right? I'm trying to fucking do a comment here, and I am going Why the fuck is Anonymous walking in there? What is he doing there? Do you understand my mind is not in the comment if you're doing that?
You do it one more fucking time and I ain't commenting on this blog if you're still here. I'm fucking serious. You're a nice guy. You're a nice guy, but that don't fucking cut it when you're fucking around like this on this blog.
Remember the Earth is a cube. Respect the cube.

Can I confess something? I tell you this as an artist, I think you'll understand. Sometimes when I'm driving on the road at night I see two headlights coming toward me. I have this sudden impulse to turn the wheel quickly, head-on into the oncoming car. I can anticipate the explosion. The sound of shattering glass. The flames rising out of the flowing gasoline.

We're all in strung out shape, but stay frosty, and alert. We can't afford to let one of those bastards in here.
It just doesn't make any goddamn sense.

Maybe we could build a fire, sing a couple of songs, huh? Why don't we try that?

I think both Bryan & Blake should be applauded for their efforts. They both give a great deal back to the street photography/photography community with their efforts.
Lets hope they don't run out of energy because of the septic tank of bitter photographers out there that just like to sit back an criticize, whilst giving nothing back but negativity.

China Plate,
It's funny how often honesty is confused with negativity.
If you can't take criticism then you need to find something else to do.
Wouldn't it be great if we created a blog and everyone in the world agreed with everything we said? What a wonderful world!
Excuse me while I vomit.

Yes, China Plate its true that there is a considerable degree of negativity out there towards certain individuals involved in this forum.

But I disagree that it because of bitterness (of the type you imagine).

What you should consider instead, is that there has been for sometime now a vociferous and pathetic whining from a core group of modern (and extremely self-aggrandizing) street photographers; that they have not being given their due credit. That sentiment has reached such cynical heights, that it is hard for people to take them seriously.

Really is street photography not given enough attention these days?!

That argument is laughably false, completely cynical, and transparently ungrateful.

And before anybody asks why anonymously post this comment - because I can. There are no rules, or etiquette to follow. Life is not fair, get over it...

I need to make contact with the person who has all these pics. My mom was a regular there. I am looking for answers to all my questions and I'm looking for my biological father. I only have a news paper article of her the were an incident where 3 Japanese men were stabbed due to a fight that broke out over my mom. Please contact me