My Shore post has gotten me thinking lately about rephotography, so I was pleasantly surprised to stumble upon Michael Marten's show Sea Change last week at Blue Sky in Portland. Marten is a one-man rephotography project. He records scenes along the British coast like this one: 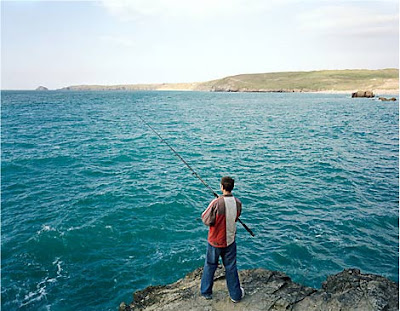 Perrenporth, Cornwall, Michael Marten
After an interval, he comes back to shoot the site from the exact same vantage point. Here is the above site rephotographed. 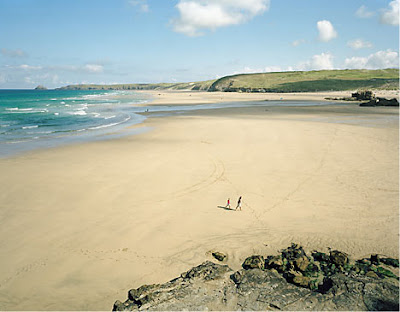 Perrenporth, Cornwall, Michael Marten
These two photos look so different that you might think they were shot years apart but in fact they were shot on consecutive days, the first at high tide and the second at low tide. Here are some more examples from the show: 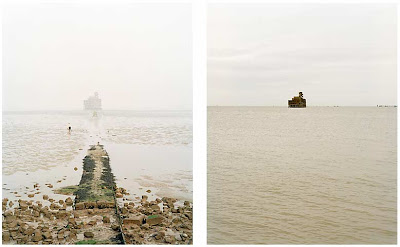 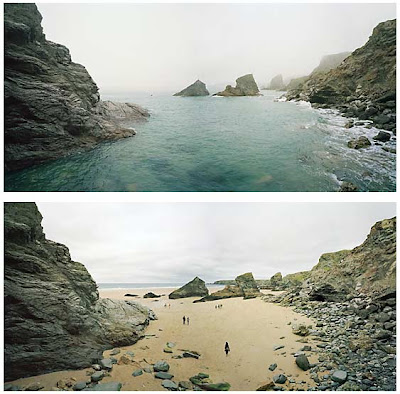 Lynmouth, Devon. Low water 12:45 pm, high water 7:30 pm
17 September 2005, Michael Marten
High tide. Low tide. Martin's schtick is simple but it doesn't wear thin. I found each pair of photos fully entertaining. There is a lot going on in each individual shot, but the real fun is in moving back and forth between the two searching for shared or missing landmarks. I think one of the great pleasures of rephotography is that it provides its own context. In a normal photo the viewer needs to fill in a lot of information on their own, but in a pair of rephotographed images each photo gives information about the other. We can look back and forth noting the similarities and changes. What stays the same over time and what has shifted?

With Marten's photos the emphasis is on change. Looking at his work I found it incredible how radically a scene can change over just a few hours. Marten's subtle use of color and atmosphere reinforce the dissimilarity, as in this pairing:

Perranporth, Cornwall. Low water 12 noon, high water 8 pm
29 and 30 August, 2007, Michael Marten
Blue Sky's show was the first public display of Sea Change. It's scheduled to go to Italy next. If that's too far to travel, many of the images can be seen on Marten's website.

Posted by Blake Andrews at 7:19 AM

Those Marten photos are cool. Do you think he waited by his tripod and camera all day?!

michael: some were taken on different days. i don't know if he notes the dates and time of day on his website but they were noted with the prints for this show. beautiful work.

The times and dates are on his website and also listed in my post above. Lee is right about the actual prints. They were quite beautiful.